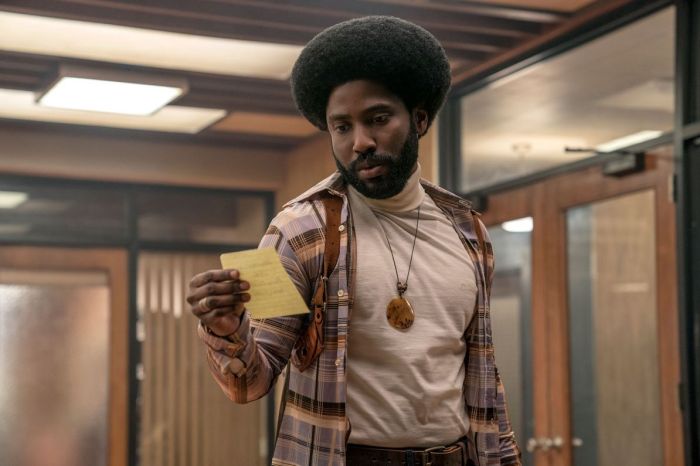 Stories told about the past often have subtle, or not so subtle, messages for the present.  This is certainly true of Spike Lee’s latest joint, “BlacKkKlansman.”

Written by Charlie Wachtel & David Rabinowitz and Kevin Willmott & Lee, “BlacKkKlansman” is based on a true story of how one African American police officer infiltrated the KKK in the 1970s.  It is also very much a story about how racism continues in our society today and how things have become bad enough that a racist is currently serving as the President of the United States.

To start with the end, one understands the movie is speaking to, and of, the present well before it offers any postscript.  When it does appear however, that postscript becomes, in fact, one of the most powerful portions of the movie.  Watching the story of how Ron Stallworth (John David Washington) becomes a part of the Klan and the good he does fighting it with other Colorado Springs police officers is heart wrenching and funny and encouraging all at the same time. Watching portions of the Charlottesville rally immediately after seeing that story unfold is stunning and like a stake through the heart.  The 1970s tale tells us that we may be making things better, but the present day footage makes it clear that things haven’t improved all that much (if they’ve improved at all).

Much of “BlacKkKlansman,” is utterly mesmerizing.  We watch as Stallworth phones the local chapter of the Klan and, by offering up horribly racist remarks, gets invited to join.  While that’s naturally a problem for an African American, fellow officer Flip Zimmerman (Adam Driver) poses as Stallworth for all in person meetings.

The whole thing seems so improbable, at least it does until we get to witness the bumbling foolishness of the KKK.  From members of the local chapter all the way to the then head of group, David Duke (Topher Grace), the vast majority of the members depicted in the movie are morons blinded by a ludicrous ideology.  They are still dangerous, to be sure, but nearly all of them are fools.  The one notable exception to this is the chapter president, Walter (Ryan Eggold), who finds himself shunted to the side as the drama unfolds, with one of his lieutenants, Felix (Jasper Pääkkönen), leading the plans with the help of his wife, Connie (Ashlie Atkinson).

It is here, with the KKK, that “BlacKkKlansman” is at its weakest.  Although we see the group is capable of awful acts, Lee’s film often makes them into comedic foils.  Stallworth is able to run circles around them on the phone and overall, too much tension is dissipated in scenes that revel in the group’s stupidity.

Fortunately, the weakest the movie gets is not all that weak.  It is absolutely mesmerizing to watch Stallworth and Flip work their magic with the KKK, and to see Stallworth have to balance a potential love interest, Patrice (Laura Harrier), with his place in the department.  Patrice, a part of the Black Power movement, is no fan of the police and their work, believing them to be more than somewhat racist as well (as the film shows, not incorrectly).

Over the course of “BlacKkKlansman,” Lee imparts not just the history of this particular tale, but of the Klan and the Black Power movement.  This happens in a way that rarely feels preachy and leaves the audience with history that they largely ought to already have, but may never have gotten.

“BlacKkKlansman” is a powerful film, and just the sort of thing one has come to expect from Spike Lee.  Not only does it tell an incredible story, but it’s an important one as well.  It causes those who are willing to stop and look around them to wonder about the world we live in and how we might be able to make it a better place.  It is a movie with a message, but not one where the message gets in the way of the story or vice versa.  Washington and Driver deliver excellent performances, as does Harrier.  It is, in short, a movie worth seeing.

“BlacKkKlansman” proves once again that Lee is a master of the art of filmmaking.