“Doctor Who” is the Best Way to End NYCC 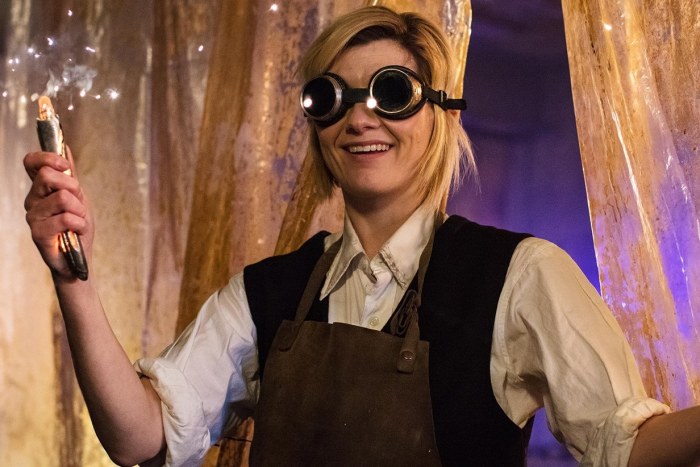 One of the things I love about “Doctor Who” fandom is that it feels so inclusive.  This is not a group of people who will lambast you for not knowing the third supporting actor in the fourth episode of Jon Pertwee’s second season and just how that actor, in their opinion, relates back to David Tennant’s finest moment as The Doctor (and woe be you if you are unaware of which moment they mean).

No, in my experience, this is just a group that loves the series, loves the main character, and loves that said character’s goal is just to help folks without hurting anyone.  Yes, sometimes someone will get hurt along the way, but The Doctor feels the weight of every life lost.

That love of the character and the series was on full display on the final day of New York Comic-Con, as The Hulu Theater at MSG hosted the new Doctor, Jodie Whittaker, and series executive producers Chris Chibnall and Matt Strevens.  Whittaker was introduced to a standing ovation and at key moments during the season premiere episode, which was watched with fans around the world, the place let out huge cheers.  It was beautiful.

During the post-episode discussion with the panel, Strevens said that in a meeting with folks at the BBC following the reveal of Whittaker being cast as The Doctor, he learned that 83% of the social media response about Whittaker was positive.  The voices of dissent may have been loud, by they were not numerous.

Repeatedly during the audience Q&A, people thanked Whittaker and the producers for bringing on a female doctor, for bringing on an inclusive cast, for caring about representation.  Even questions on that topic that were more comments than questions, usually something that people sigh and complain about in the audience, got big cheers.

The audience was virtually swooning over the Doctor, the episode, and what the new season might hold. Even better, all that love appeared to be reciprocated on the dais as once or twice members of the group seemed nearly overcome with emotion.

As for the first episode of the new season, the appearance of a new Doctor, and what the future holds in store, this critic, for one, thought it all worked exceptionally well. It is no easy task to take over the reins of such a show, nor to step into the role of a character as beloved as The Doctor.  However, it was an episode that felt wonderfully, beautifully, “Doctor Who.”  Whittaker handled both the funny and serious moments, and the new set of companions feels as though they could be an interesting group.

We didn’t get to take a gander at the look of the TARDIS interior, nor were there opening credits, so we don’t know what those will look like either and I am very curious to see them. But, everything we did get of the episode and from Whittaker, Chibnall, and Strevens made me confident that the series is in good hands and that we ought to get new adventures in time and space for years to come.

To say it was a great way to end my New York Comic-Con for the year would be a gross understatement.

Comic-Con is all about fandom, and what we got of “Doctor Who” fandom is the best representation of what that can be.

‹ “How to Train Your Dragon: The Hidden World” Draws out Emotions at NYCC
Movie Review: “Bad Times at the El Royale” ›