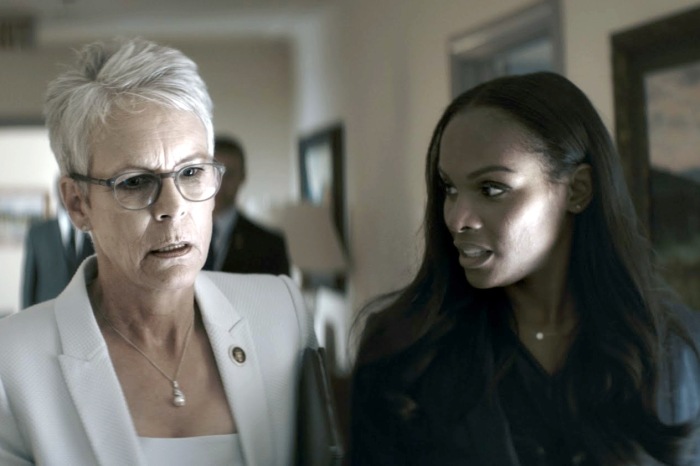 There are difficult, terrible, decisions that have to be made by the individuals in our government; decisions with massive ramifications and unknown outcomes.  That knowledge has to weigh upon those making said decisions, and the new film by writer/director Joe Chappelle, “An Acceptable Loss,” takes a look at the fallout of one such, hypothetical, decision.

The film follows Dr. Elizabeth “Libby” Lamm (Tika Sumpter) four years after she made a fateful choice in her role as a national security advisor to Vice President Rachel Burke (Jamie Lee Curtis).  Although the audience is not initially privy to exactly what took place, over the course of “An Acceptable Loss” we are repeatedly treated to flashbacks filling us in on the details.  As for the present, we get a Libby who has begun teaching at a university, to the outrage of many (due to this choice), including one graduate student, Martin Salhi (Ben Tavassoli).

Libby lives a mainly analog life, eschewing computers and phones and writing her memoirs on yellow notepads.  She is scared of the world around her, putting in additional locks on her rental house, and horribly upset by her past in government.

Chappelle and Sumpter build this beautifully.  As the film unspools, the tension is continually ratcheted up.  We do not know Martin’s plans, but his stalking of Libby is leading somewhere and is tied to Libby’s past.  The reveals of that past never cut the tension.  In fact, even though the audience is able to work out what happened before being shown the exact moment in question, that doesn’t lessen its impact once we do see it.

This is an impressive feat – all too often, movies that hold back on details annoy, they feel as though they are keeping things hidden because they have nothing interesting to say outside of the reveal.  That is not the case here.  “An Acceptable Loss” may come down more on the side of Libby’s government work being bad, but it doesn’t come down hard on that side, offering up a clear logic by which she did what she did (something that, obviously, I will not be revealing here).

In other words, this is not a preachy movie.  It instead wants to know, ignoring whether Libby was right or wrong, the emotional and mental fallout of her actions for her.  We spend so much time with this character in this film, in quiet, personal moments in her daily life, that we get to know Libby and to see the trauma she is currently suffering from those past actions.

Sumpter delivers this gnawing, internal, upset with perfection.  It is in her eyes all the time and present in the smallest movements, no matter what she does.  Libby is sad about what she did and is now afraid of both the government and random strangers.  It is a horrifying proposition.

As “An Acceptable Loss” approaches its conclusion, it does lose some of this tension.  When the climax draws near, the affair speeds up rather than keeping the deliberate pace which it earlier established.  This is something of a disappointment, but it does not wholly undercut all that has come before.

A word or two must also be said about Martin.  Although he could be a completely stereotypical disgruntled stalker-type, someone ought for revenge for Libby’s actions, the movie turns him into more than that.  He becomes a fully fleshed out character and, just like Libby, draws the audience in.

Due to its subject matter, it would be difficult to describe “An Acceptable Loss” as a delightful movie, but it is undoubtedly a fascinating one.  It is a smart look at consequences without being overly judgmental.

‹ Digging into the TiVo Archives… and Coming up Empty
Movie Review: “The Standoff at Sparrow Creek” ›