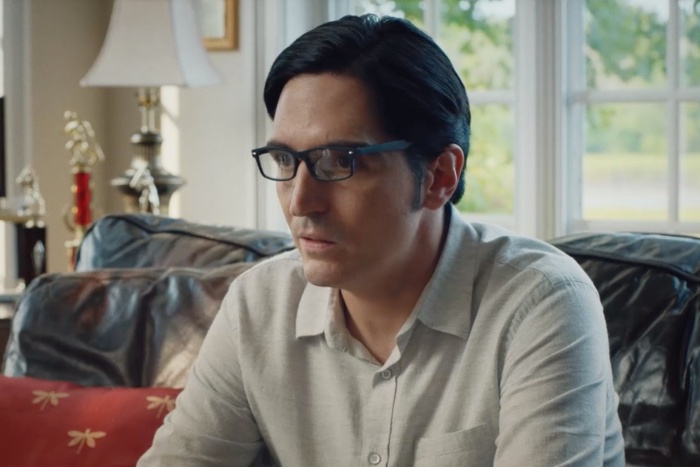 Not all movies deal in subtlety.  Some instead choose to beat the audience over the head with any message they have to offer. That is a decision that filmmakers can make, but it needs to fit in with the rest of the story being told and the manner in which that story is conveyed.  While “Teacher,” the new film by writer-director Adam Dick, obliterates any sense of subtlety with its message, it does not do so in concert with the rest of the goings-on.

Focusing on, not surprisingly, a teacher, James Lewis (David Dastmalchian), and a group of his students, this story is about bullies and victims, right and wrong, heroes and villains. It is a movie quick to point out its main thesis – being a victim doesn’t necessarily make one a hero; being a victim is being acted upon and it is one’s response to those actions that matter. Like a middle schooler learning the “five paragraph essay,” it is a movie which reiterates that thesis as much as possible.

The audience watches, in flashback, as a young James (Bryce Dannenberg) is bullied and as kids in the present day—Preston (Matthew Garry) and Daniela (Esme Perez)—are bullied.  We watch the horrible fallout of those actions and as little, seemingly, is done to the bullies, most notably the present-day bully, Tim (Curtis Edward Jackson).  There are actions of revenge and villainy.  They are borne out of sadness and of trauma and it is, without a doubt, heartbreaking.

“Teacher” is a slog of a movie to get through because it is filled with horrible action after horrible action.  It is an unrelenting train wreck of bad actors (as in those behaving poorly, not those playing a role) and good intentions gone awry.  At the same time, there are moments where the film appears to want to offer hope and happiness, but these are completely subsumed by the everything else that takes place.

This even exists within the backstory of James.  His treatment as a child has led to his being prone to violence and an impending divorce. He is victim and perpetrator, but it isn’t enough for the movie to leave it there.  No, in one of the most pure examples of the film’s obsessive need to go one step further, James is an alcoholic as well.  This can have nothing to do with his being bullied and turning into a bully, but it is the case nonetheless.  It is just another way to pile on to the character, make his life that much harder; that much worse.

“Teacher” is even told in somber fashion.  It is slow-moving and deliberate.  Scenes are, usually quietly, allowed to grow and play out to their fullest, without a lot of cuts and rapid movements.  This is not a movie that progresses quickly from one horrid event to the next, each one is given its full measure of space.

The actors are fully sunk into their parts and each is compelling in their own way.  It makes it all the more easy to feel each injustice inflicted upon them, or which they inflict upon someone else.  Yes, their performances are good, but, perversely, that doesn’t help the movie.

Putting together such a film is, again, a choice, and it is the one Dick has made.  But, in doing so, he has completely undercut himself. Because everything is so bleak and vile and the few rays of sun are drowned out by the darkness of the tale and characters, it is all too easy to dismiss the film out of hand.

In fact, it may be best to just avoid it in its entirety.  The tale of bullying is one that has been heard before and told better.