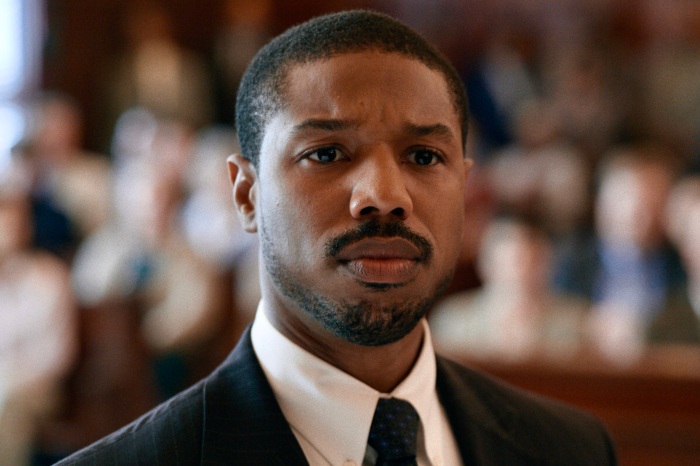 Told as a two-hander, the audience watches as young lawyer Bryan Stevenson (Michael B. Jordan) does everything in his power to overturn the conviction of Walter McMillian (Jamie Foxx). Obvious to anyone looking at the case, McMillian was wrongly convicted, the testimony against him, chiefly by Ralph Myers (Tim Blake Nelson) was coerced, and McMillian was sent to death because a white woman died and he’s a black man.

It is–and I don’t want to diminish this–an awful story. It is full of hate and racism and wrong. From the Sheriff, Tate (Michael Harding), who arrested McMillian; to the new DA, Tommy Chapman (Rafe Spall), who has to deal with the aftermath of the conviction which he did not pursue, the audience watches as one horribly racist thing happens after the next.

That aside, one of the biggest problems with “Just Mercy” is that it can’t even make its own case. This is a movie which is deeply invested in telling the story of racism and, quite explicitly, about the fight to not have a two-tiered justice system. Yet, it doesn’t make any strides here. Stevenson getting McMillian’s conviction overturned does nothing to fight against a corrupt justice system as a whole.

There is just one man who gets to go free, and while that’s good, the movie makes it clear, but only at other points, that such a result isn’t enough.  It is obvious that the two-tiered justice system will allow an African American into the top tier if the system itself is caught putting the person into the bottom one. There is no systemic change offered.

Stevenson is running group called the “Equal Justice Initiative,” but “Just Mercy” is pushing, correctly, for a notion of “equal justice” where justice is actually meted out equally, not where it’s only equal once the inequality has been pointed out. It is something the movie wants to argue Stevenson is achieving while offering up no actual sense that the world is changing, only that Stevenson has the ability to get people out of jail after the fact. It is disappointment and sadness and horror cloaked in a mantle of great success for filmic purposes.

In the movie’s afterward, the audience sees McMillian and Stevenson talk before the Senate about the problems with justice. It could be a great summation of the film, except that the discussion at that point is focused on class not race, completely ignoring the fact that the movie is about race not class (except for where the latter overlaps with the former).

The movie treats the actions of Stevenson as a triumph. It has the necessary music and grandiose oratory and hugs and joyous tears. It is true that getting McMillian out of jail is big, but it is all too evident that the racist actions of those running the legal system in this portion of Alabama will do the exact same thing again given the chance.

Foxx and Jordan are wonderful in the movie. Brie Larson (who plays a director of the Initiative) is fine, but has no real character. Nelson is heartbreaking and Spall does well as a man who is probably racist and certainly unwilling to stand up to the racists around him.

But “Just Mercy” fails where it most wants to succeed. It does well telling the story of one conviction being overturned; of one injustice rectified. What it wants to do is tell how the world was changed, how the system was fixed, but it doesn’t come close to approaching that issue.  Instead, it simply offers a declaration of near victory.   That just isn’t enough.