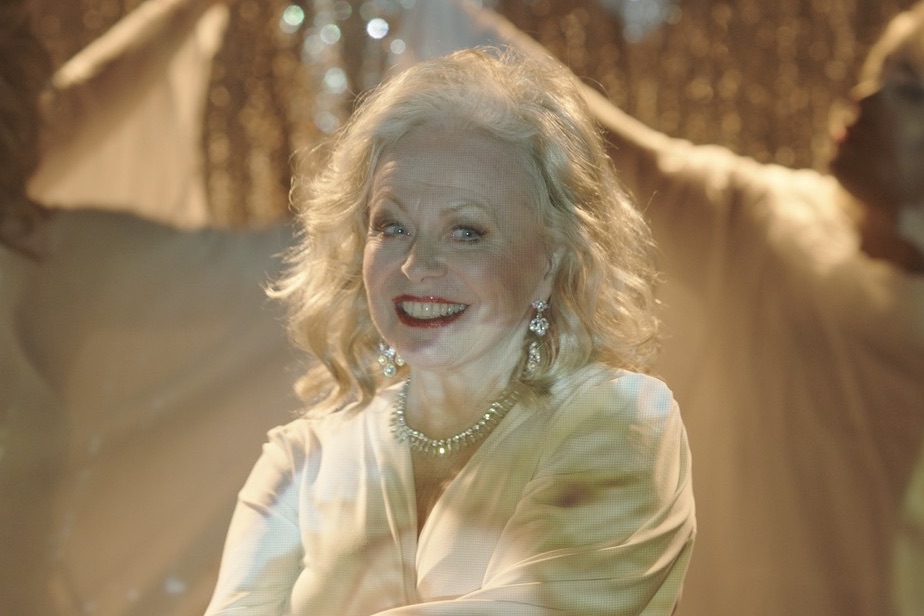 The new film “Stage Mother,” directed by Thom Fitzgerald with a script from Brad Joseph Hennig is one of those movies which may be obvious and stilted and all too easy, but which still manages some level of success.  The audience sits there watching it unfold, knowing what’s going to happen, and wanting the characters to find happiness to such a degree that a large number of the problems are forgiven.  We are pulled along on this emotional journey—despite knowing its outcome—and, maybe, are the better for it.

“Stage Mother” follows the tale of Maybelline Metcalf (Jacki Weaver), a woman from a small Texas town who goes to San Francisco following the death of her son, Rickey (Eldon Thiele), a drag queen and drag bar owner who lived in the city.  Along with her husband, Jeb (Hugh Thompson), Maybelline rejected her son due to his sexual orientation and lifestyle years earlier, and now her husband won’t even travel for the funeral.  As the title for the movie may indicate, once in San Francisco, Maybelline winds up helping out in the club, improving the lives of the performers, and learning a little bit about herself along the way.

What the movie gets right is its push for understanding, but said understanding also comes about far too easily.  That is, it takes Maybelline about a minute and a half to realize that she ought to help people in need no matter what they look like or who they love, and that for years she hasn’t.

Even before Maybelline decides to do the right thing, “Stage Mother” has already foisted the problem of bigotry onto Jeb.  Maybelline tells him as she heads to San Francisco, that it’s Jeb’s fault that she has stayed away for so long.  There are moments where the movie seems to recognize that maybe she had some part in it all, but when it gets the chance, the whole affair is all too happy to cast Maybelline in a good light.  Doing this makes the transition from kinda good person to truly great one much easier for the film to achieve – we never have to overcome hatred for Maybelline because, after all, she’s been forced to be a bigot against her will.

Still, we, as an audience, push for happiness for Maybelline because she’s coming to a better understanding of the world.  We want the same for Rickey’s would-be husband whom he never married because Maybelline wouldn’t have attended the wedding, Nathan (Adrian Grenier); Rickey’s best friend, Sienna (Lucy Liu); and all the drag queens at Pandora’s Box (the bar).  Our desire for a happy ending makes it easier to accept the corner cutting that takes place in the storytelling.

Maybelline, somehow, has the magical touch and can fix everyone’s life with little more than a snap of her fingers.  Help one person kick drugs?  No problem, all it takes is one night!  Stop a mother from making the same mistake she did, disowning her son?  Easy as pie!  Convince Sienna that abusive men are bad?  Done deal!  Turn the club into a massive success using Rickey’s exact vision that he never implemented for some reason despite being in charge of the creative side of things?  Duh!

But we do want good things for everyone involved.  We want the drag queens—Joan (Allister MacDonald), Cherry (Mya Taylor), and Tequila (Oscar Moreno)—to lead happy lives.  We want their drag mother, Dusty (Jackie Beat), to find fulfillment and joy in what Pandora’s Box has become.  We want Sienna to find someone nice with whom she can raise her son and, failing that, just happiness in general.  We even, kind of, want Maybelline to find a new soulmate in a hotel concierge, August (Anthony Skordi).  This last is nowhere near as explored as it might be, nor are the ramifications of it, but we still want happiness for Maybelline.

Fitzgerald, with the help of the cast, puts the audience’s wants front and center, causing everything else to recede into the background.  We want the problems of the world to be that easy to fix and so we stomach flaws, including more than one poor line reading and some awkward editing, within the film because of that drive for happiness.  And that’s okay.

“Stage Mother” is fantasy, one we all wish could be real.  It’s not great in and of itself, but there’s greatness in the idea.