Movie Review: “News of the World” 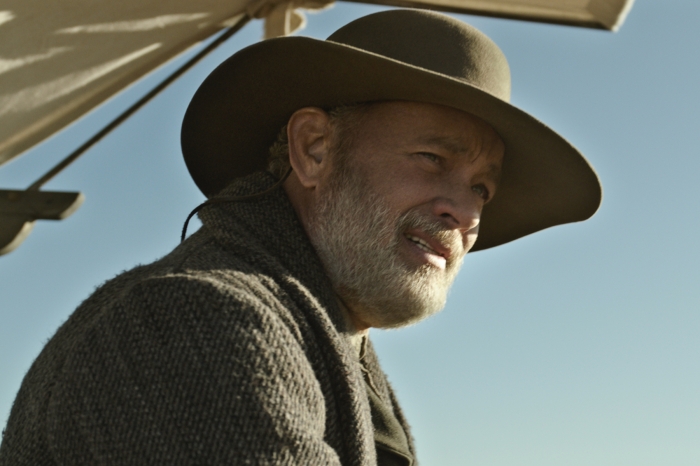 There are movies which sometimes cause me to struggle. For one reason or another, there’s a bit of them that just feels off. I’m talking about movies where I am incredibly, insanely, hugely engrossed in what’s going on; where I love it all… except for this one nagging thing. I am well aware that often this nagging thing destroys my enjoyment but isn’t truly a big deal. Then, however, there are the occasions where not only does this element hurt my enjoyment, but the reverberation is massive and, perhaps, ought to take down the rest of the work.

I give you “News of the World,” directed by Paul Greengrass with a script from Greengrass and Luke Davies. It is based on the book by Paulette Jiles and features none other than Tom Hanks in the leading role. It is one of those movies with something that may seem small but has huge implications.

The movie takes place in Texas shortly after the end of the Civil War. Grant is President, the state has not yet been readmitted, the events are still near the fore of everyone’s mind, and the Union Army is still highly visible. Hanks—everyman hero—is Captain Jefferson Kyle Kidd. Formerly a printer, he now goes from town to town reading newspapers to people, offering folks a digest of the stories, big and small, that they may not know about. A twist of fate finds him taking care of a girl, Johanna (Helena Zengel), whose parents were killed by Native Americans. She lived for years with the members of the tribe who killed her parents, learned their language, blocked out her previous life, and came to accept them as her family. They were also killed and so Captain Kidd is taking her back to her Aunt and Uncle.

That is a more dense plot summary than what I usually offer and that’s because I want to get it out of the way. I want to get out of the way the fact that the movie is beautifully shot. The vast expanses of Texas are captured in haunting ways. The cabins that sit alone and the small towns and larger ones and various camps Captain Kidd and Johanna visit are palpably real. The grit and grime and dirt of the places are real as well. The harshness of the world stands out even if it’s the same series of tans and browns as so much else on the canvas.

What I don’t’ want to dispense with quite so fast is Hanks. Tom Hanks is more than just a fine actor, he is a fantastic one. Hanks’s power stems from his ability to make every single person he plays so terribly human. Whether he’s portraying an astronaut or a TV legend or a teacher-turned-soldier or anything else, Hanks makes these individuals someone we not only care about, not only want to know, but someone for whom we truly feel.

There are actors who seem untouchably above the rest of us, who are compelling on screen but you just know would stare right through you if you met them. Not Hanks. I have no personal experience with the man, but he exudes the feel that if you dared say hello as you passed him, he would more than say hello back, he would ask you how you were. And, were you so bold as to give a real response rather than a tilt of the head, Hanks would listen to it; actually listen to what you had to say. Tom Hanks seems like a real, down to Earth person. That’s part of his power.

Tom Hanks stars as the hero of this film, Captain Jefferson Kyle Kidd, a former officer who fought against the United States of America, an officer who fought to not be a part of this country anymore. And that is something we have to talk about because the thing that upset me about this movie, the thing that made me question the movie despite the fact that it has absolutely everything else going for it, is that Captain Kidd (and he still goes by “Captain”) fought for the wrong side.

Greengrass shows us exactly how the Texans of that time, at least within the world of the film, feel about the Union (against) and slavery (for). If this were a man who was ashamed of what he’d done, who was ashamed of what side he fought on, he wouldn’t go by Captain. He travels to places where few folks, if any, know him, but he introduces himself with his title. We do learn that he didn’t love fighting and he recognizes the horrors of war and what he did, but he’s not embarrassed about the side he was on – he’s Captain Kidd.

The Confederate States of America left the United States so that they could have slaves. They left because they felt as though people with darker colored skin could be owned by people with lighter colored skin. The hero of the film, Captain Kidd, may know war is hell, but is proud of having fought for Texas against the United States of America. I look around this country and see the evil that still exists as a part of some, to this very day, honoring the Confederacy and I have no desire to praise a movie that promotes that.

As a critic, I’m not supposed to say what a movie should have done, so consider this paragraph not strictly a part of this review… It’s not enough to have Captain Kidd acknowledge that war is hell and that he’s done terrible things as a part of war, especially super late in the movie after he goes around being happily called Captain all the time. Yes, happily. At some point during the movie, Johanna starts calling this man Captain and they spend several days traveling alone together — if he wasn’t proud of his service against the United States, she wouldn’t call him Captain. There is no compelling reason to have this man be a Captain. It could take place during the same time period and he could have any reason for not having been a part of the war. It is a conscious decision that we keep making to depict having fought against the United States as heroic. It wasn’t heroic, it was horrific. We need to stop and think about what we’re doing and what we’re passing on. Our honoring this travesty is part of issues this nation still faces in terms of race. This very month the Texas GOP suggesting seceding from the United States. Our honoring this god awful past decision is built into the logic by which these individuals suggest doing so again. It has to end.

So, here we are, closing paragraph of the review; the summation. Every technical aspect of this film is brilliant. The acting is brilliant. James Newton Howard delivers a brilliant score. I cannot and will not recommend the movie—and I will not provide a review score—because this “little” character detail turns out to not be little but rather huge and crucially important and disgusting. We need to do better.