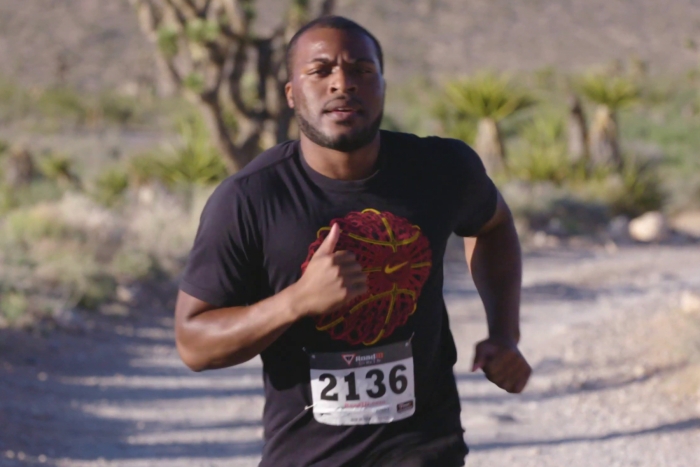 There is a certain masochism required to run a marathon. The training is long and often difficult, injuries crop up and destroy months of work, pandemics come along and cancel everything, some races can be cancelled at the last minute without worthwhile explanation at all (looking at you, Delaware Running Festival). There is, however, a sense of accomplishment that comes with crossing the finish line – whether you run the race you wanted or not. Between all of this and the fact that runners are all too easily (and perhaps incorrectly) grouped into types, marathon training feels like the perfect sort of fodder for the mockumentary treatment.

I believe as much at least, and clearly writers-directors Keith Strausbaugh and Anthony Guidubaldi must have felt the same way at some point in time, as the two men have helmed the movie, “Marathon,” which is out on digital this week. It is amusing and biting (particularly when one recognizes themself on screen) and can easily make one question their decision to run.

“Marathon” follows a diverse set of runners as they prepare for the Devil’s Canyon marathon. On display are the mom runner, Abby (Anais Thomassian); the runner who wants to qualify for Boston, Ryan (Andrew Hansen); the runner who wants to race in a silly outfit, Jenna (Natalie Sullivan); the one who quits, Emilou (Kimia Behpoornia); and an African American guy who keeps getting stopped by the police any time he runs in his neighborhood, Shareef (Tavius Cortez). There is also the man behind the marathon, the organizer, Ed Clap (Jimmy Slonina).

In terms of the real world, this makes Shareef the most important of the characters on screen as we try to understand our society and some of the problems we face in it, but he is also something of an outlier. There is a shot of a policeman distinctly putting his hand on his weapon as Shareef approaches and there is nothing remotely humorous about that. Even beyond that scene, Shareef faces overt societal ills nearly every step of his journey, whereas Ryan is just obnoxious, Jenna is silly, and Emilou may be a quitter but is also a genius for having done so.

Abby faces a different set of burdens than Shareef, but she too exhibits a set of all-too-real difficulties, in this case those faced by women as they try to both be mothers and maintain their own identity and desires. Abby, unlike Shareef, does not regularly get tackled by police during “Marathon,” and that’s a notable difference between the two, but there is still something much more real and tragic about these two figures than anyone else.

Other characters in the film, chiefly Ryan and Jenna, are their merely for laughs and the mix often works, although unquestionably not always (as with the gun). There is something admirable, but not always successful, in the attempt to balance a lighthearted look at runners with an examination of the real and quite serious problems of our world, but one never gets the sense from the movie that there is truly an attempt to explore the problem. It is as though naming it were enough, but with much of Shareef’s character hinging on his being chased by police (he also has problems with his sister who is more of an athlete), it is not.

Those people out there who have run marathons may get more mileage out of Strausbaugh and Guidubaldi’s film that those who haven’t, but a number of jokes will land no matter how far one has traveled by foot. The work also has that other tendency marathoners have during training – to travel the same ground over and over again. There is still some value in the trip, but one does tend to wish that the view varied a little bit more from time to time. Put another way, there is a repetitive nature to aspects of the characters which, although that may make them more real, doesn’t necessarily add to the movie.

“Marathon” is a mildly amusing film and works better for its understanding of the types of people one sees out there at races (or training) more than for its sustained look at such training and those doing it. It is not a film set to take the podium in any mockumentary competition, but like the running shirt says Any Finish Time > DNF >>> DNS.

‹ From “Cruella” to “Dalmatians,” is this Prequel Worth it?
“Almost Famous,” “Boogie,” and Growing Up ›