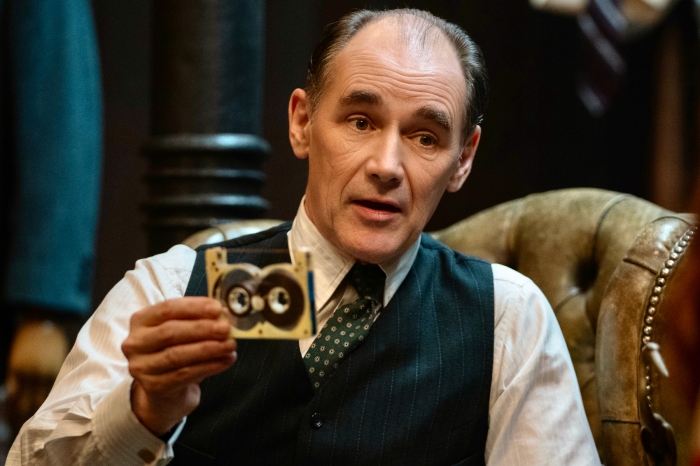 “You had me at hello.” Renée Zellwegger’s line from “Jerry Maguire” has become something of a punchline (maybe it was a punchline from the moment the film came out), but there is still truth in there. Sometimes, from the moment you start a thing—a conversation, a movie, a book, a television show—you just know that you’re going to like it, you just know that it’s going to work for you. It has you at hello.

There is a shot that opens the new film, “The Outfit.” It is this simple sort of a thing – a man approaching a tailor shop early in the day, the suits in the window look fantastic and there’s the reflection of an elevated train moving in the background. Over the production companies’ vanity cards there were already some background sounds, helping situate us, but the crisp and cold look at a shop in Chicago in late 1956 truly sets the scene.

If that’s not enough to entice you, in the next shot, inside the business, we see the film’s hero, Leonard Burling, played to perfection by Mark Rylance. This man—a cutter, not a tailor—provides us with some voiceover, explaining what goes into making a suit. The description is meant to also work for the way the story unfolds and we will return to the voiceover a couple times during the film. It is always engaging and delightful when those moments occur.

Directed by Graham Moore with a script from Moore & Johnathan McClain, “The Outfit” is almost a stage play. There might be one more establishing shot of the shop, but all of the action unfolds within it, either in the front room, the fitting room, or the back room. It is talk heavy, but never to its detriment. Rylance, as noted, is brilliant throughout as this soft-spoken cutter (tailors, he tells us, just sew buttons and hem), as is Zoey Deutch as Mable, Leonard’s receptionist. Both of them know more than they let on, both of them have a history and plans, but the movie is content to let it all slowly develop over time.

Well, mostly. Leonard’s shop may be quiet, but he has also been allowing a local mob outfit to use it as letter drop, with the collection of the letters occurring in the evenings. Mable, for her part, has a romantic relationship with Richie (Dylan O’Brien), the son of the local crime boss, and the whole story truly gets going when one evening, after she’s gone home but Leonard remains, Richie is brought into the shop by a Francis (Johnny Flynn), a member of the crew. Richie has been shot, a rival gang is out to get them, and FBI may or may not be looking there way as well.

In its best moments, “The Outfit” is an understated tale, with whatever group of people happen to be in the shop just talking, discussing how they’re going to get out of trouble, discussing their histories, discussing the temperature in Chicago in December. The number of people and problems that appear over the course of the thing is pretty incredible and constantly thrilling.

Alexandre Desplat provides the score, which perfectly insinuates itself into the film. The costumes (created by Sophie O’Neill and Zac Posen), too, are a thing of beauty. In fact, the entire thing feels like a bespoke suit, it just fits so very well.

Of course, as the movie closes and as we hear a little bit about living with imperfection (we are all humans, after all), so too does “The Outfit” slip. Rather than being a reflection of a sort of staidness that we see at the beginning from Leonard, it becomes something else, it becomes so very much more overt. It is almost as though, having tried to shy away from it, the movie must indulge some sort of baser instinct. This misstep doesn’t ruin the film, not by any stretch of the imagination, it is just one twist too many; an extra bit of flair on a suit which does not require it in order to stand out.

Not only that, but “The Outfit” had me at hello and I can’t wait to greet it again in the future.

‹ Movie Review: “John and the Hole”
The Beautiful Dream that is “Nightmare Alley” ›