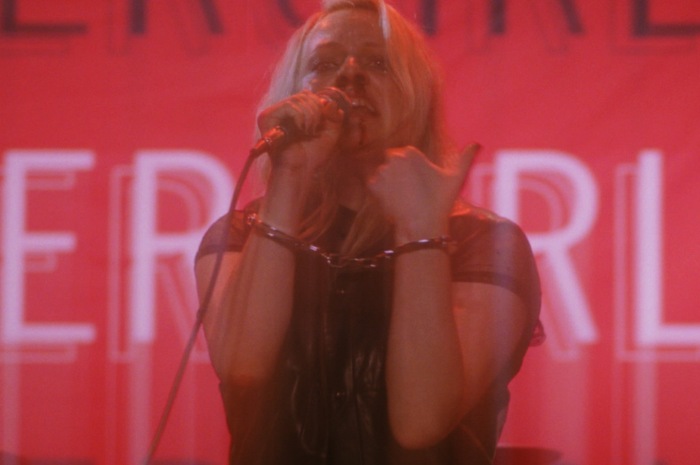 The story of the rock star who, due to drugs and alcohol, falls from grace is certainly nothing new.  The fact that it has been done before, however, doesn’t stop the incredible impact of writer-director Alex Ross Perry’s “Her Smell,” which led off the press and industry screenings for the New York Film Festival on September 17th.

Starring Elisabeth Moss as Becky Something, the lead singer of all-girl rock band Something She, this is a stunning, moving, portrait.  For much of the movie, we watch Becky in the middle of a nervous break down, one moment happy and smiling, and the next threatening those around her.  Not content to just end her career, Becky is on the verge of destroying the lives of her band mates, Ali (Gayle Rankin) and Marielle (Agyness Deyn); the head of her record company, Howard (Eric Stoltz); his newest band; her ex-husband, Danny (Dan Stevens); and possibly even her daughter.

Perry has organized the film as a set of moments, or scenes, in Becky’s life, with these moving forward in time over the course of several years.  Individual moments are broken up by flashbacks to the rise of Something She, with these interstitials appearing as camcorder-esque shots.  Whether the film is in the present or in the past, it is equally compelling and despite the change in aspect ratios and looks moving from one to the other, it still is sometimes difficult to pinpoint the second when a sequence from the past ends and the present begins – assuredly, this is due to the film’s emotional current, which carries the audience from one thing to the next.  That current, as with so much else in the film, is controlled by Moss.

It is impossible to speak of “Her Smell” without repeatedly coming back to the amazing performance Moss delivers in this film.  In Becky’s worst moments, Perry’s camera is right up in her face, unflinching, and Moss owns that image, pulling in the viewer in the same sort of way Becky pulls in those around her.  The difference is that Moss controls what she is doing, and Becky, during her bad times, is a black hole, happy to suck the light and life from everyone who comes to close but maybe not in control of her own actions, and certainly unable to avoid her worst impulses.

The movie, however, doesn’t stop there.  We do not merely see the damage Becky can bring, but also the good.  There is no doubt that Something She would not have been so successful without Becky front and center.

We are repeatedly told of lawsuits that Danny, Howard, and goodness knows who else have initiated against Becky, and yet these people still seek out Becky with the lawsuits on-going.  They care for her, they want the best for her, and at the same time they are well aware that their success, career and financial, is hitched to her wagon.  Many of these individuals have, undoubtedly, allowed Becky to go down this dark path because it has helped them to some extent. They may not have known how bad it would get, but they didn’t stop things early on when it might have been easier to do so.

Perry’s screenplay is able to convey all of this without ever halting the proceedings to drop in the exposition.  “Her Smell” presses forward at an almost relentless pace for much of its run – continuing to move forward until the audience is ready to break.  The sequences from the past allow a moderate breather, but then all too soon (or perhaps not soon enough) we are back with present day Becky and being sucked in once more.

When the break does come, when Becky has to face herself and her demons, it is no less emotional, no less stirring than anything that has come before it.  It is an outstanding gear change, and Moss doesn’t lose any of the gravity from earlier moments even if the change to Becky is drastic.

The film’s score and the music of Something She help press home the emotions of “Her Smell,” as does the camera work and the editing and the supporting cast (which also includes Cara Delevingne, Virginia Madsen, and Amber Heard), all of whom are wonderful.  But, this is Elisabeth Moss’s film and she is stellar in it.  It is an incredible tour de force performance and more than worthy of any and all accolades that come her way due to it.

It is powerful filmmaking and shows that just because we all know the broad strokes of a story doesn’t mean that the tale can’t be told in an exciting, fresh, impressive, fashion.