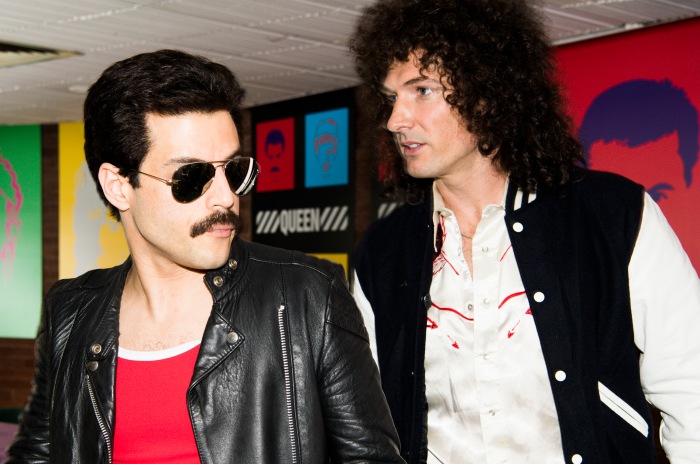 Biopics are not always strictly true, they are not fastidious and precise.  Liberties are taken.  It is a necessary part of the process that is condensing someone’s life into a two hour movie.  I have said this before and it remains true.  It does not, however, stop people from going to biopics in an effort to better understand the characters on which they center.

Consequently, one would go see “Bohemian Rhapsody” for a better understanding of Freddie Mercury (born Farrokh Bulsara) and the band, Queen.  Coming out of the Bryan Singer directed film, audience members will understand the lead singer to have been little more than a petulant child, less veering any way the wind blows than huffing and puffing when it doesn’t blow in the way he wants.

It all starts off amusingly enough – Mercury (Rami Malek) forces his way into a band looking for a lead singer and continually pushes them towards greater heights.  It isn’t that his bandmates—Brian May (Gwilym Lee), Roger Taylor (Ben Hardy), and John Deacon (Joe Mazzello)—don’t contribute, but it is Mercury’s audacity that pushes them forward, helping them gain the fame and fortune and everything that goes with it.

However, Singer’s movie, which is written by Anthony McCarten from a story by McCarten and Peter Morgan, never plumbs the depths of Mercury’s psyche and it certainly doesn’t approach his bandmates to the extent it does Mercury.  Instead, it just skips from one moment to the next to the next, skimming the surface.  We see that the band zips across the water, across the land, in montages with the sense that one performance simply blends into the next and the one after that. Although this may be true of the rock star’s life, it is neither new, nor insightful.

Malek’s performance though in “Bohemian Rhapsody” is wonderful.  He is a magnetic force you will remember when this is blown over, the movie falling into line with so many other biopics that have hit the screen through the years.  The performance deserves a far better film around it.

This in no way is meant to impugn any of the other actors in the film, a list which includes Aidan Gillen, Mike Meyers, Lucy Boynton, Allen Leech, and Tom Hollander.  It is just that all of their performances lead to so very little.  This is the story of a band that decided that they weren’t just shoutin’ in the street, “gonna take on the world someday,” that they were going to do it right out of the gate, and do it by constantly reinventing themselves. Somehow though, the movie never gets past everyone’s basic knowledge of the group and all the clichés that movies about rock bands so regularly use.

When the opportunity does arrive to show something deeper, something more, it often shies away from it. Yes, we get the classic (even if it’s true here) tale of someone evil worming their way into the band, but when the movie could show unique moments in the band’s history, like Queen getting banned from MTV (purely as an example), it offers it the briefest amount of lip service and then moves on, turned away from it all like a blind man.

Singer frames the film with Queen’s performance at Live Aid, with the closing minutes offering a significant portion of the band’s time on stage at the benefit.  It feels like a cynical attempt to pump up the audience before they leave the theater, to ensure that if anyone asks them, “are you happy, are you satisfied,” the answer will be a resounding “yes.”

It is undoubtedly great listening to the songs throughout the movie.  The band was (is) an incredible one and created a large number of well-known songs that cause one to toe-tap.  Whenever “Bohemian Rhapsody” offers up one of these tunes, whether at Live Aid or anywhere else, it picks up steam.  Hearing the foot stomp and clapping for “We Will Rock You” in the movie is electric.  Watching the audiences react to Queen (and vice versa), is equally great, but none of that is something for which you have to watch a movie.  You could simply watch footage of the actual band doing their thing. We watch the shows, we watch the stars, the movie about those things needs to provide something different.

If there’s one great takeaway with “Bohemian Rhapsody,” outside of Malek’s magnetic performance, it’s that this was a band born to be kings, princes of the universe.  It is wonderful, even on a surface level to watch them make that climb and continue on their perch.  But, that can only last so long and it is not a full film. Without much else to say, this movie quickly falls from its heights, leaving one with the sense that we should all know more about the group, but that those answers must be looked for elsewhere.