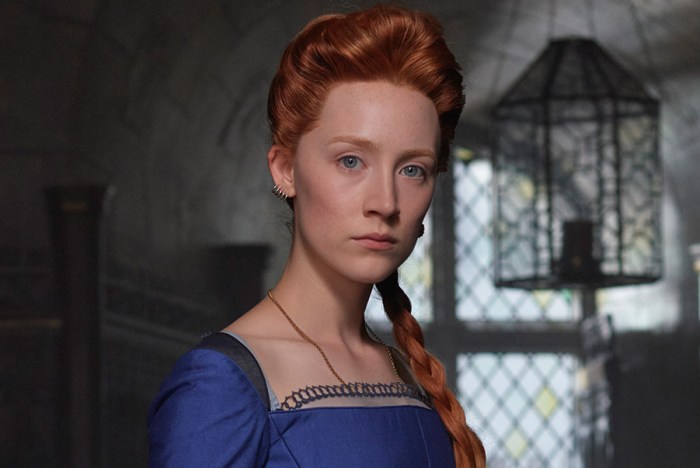 At its outset, “Mary Queen of Scots” is a slow-paced chess match between two queens — Mary Stuart of Scotland (Saoirse Ronan) and Elizabeth I (Margot Robbie)of England.  In fact, at points it seems curious that the film is not titled with both their names.  Soon enough, however, it becomes clear why this is – Elizabeth drops away from the storyline. However, Mary’s tale cannot be told without Elizabeth and, consequently, the latter makes her return before the credits roll.  Unfortunately, having disappeared for so long, the audience is left to guess at the changes in her thought processes and is pulled out of the film.  It leaves “Mary Queen of Scots,” which otherwise boasts two wonderful performances of Queens, as a moderate disappointment.

Directed by Josie Rourke, and with a script from Beau Willimon, the movie opens at the close of Mary’s life in 1587, when her death is ordered by Elizabeth.  It then jumps back more than 25 years, to Mary’s arrival in Scotland after the death of her French husband.  As a Stuart, she feels that she has a claim to the throne of England and wants to work out with Elizabeth, who is childless, a plan of succession.

At this point in the movie, it is an engrossing affair. Mary and Elizabeth are played like mirror images of one another.  Both are Queens without Kings.  Neither has a child.  Both want to secure their futures and their legacies.  Elizabeth doesn’t marry because she feels as though she would lose power, becoming subservient to her husband.  Mary, however, does marry, choosing Henry Darnley (Jack Lowden) as her husband and giving birth to their child.  She then experiences exactly what Elizabeth feared and has to find a way to remain in power.  This is the pinnacle of the movie, watching Elizabeth’s fears come to pass in Mary.

Everything else about the tale is a let down.  The question of Darnley’s sexual orientation isn’t dealt with in a way that makes it feel like more than someone’s idea of a scandalous detail.  An aide to Elizabeth having a fling with one of Mary’s ladies-in-waiting is the same, and an element that disappears from the movie as soon as it is no longer of needed for the main story to progress to boot.

David Tennant appears in the film as John Knox, the founder of the Presbyterian Church of Scotland.  Face largely covered by a long beard, Tennant is still able hold sway on the audience just as Knox does with his parishioners during some fiery speeches. Yet, these speeches are few and far between and the character is relegated to the role of toadie, spouting off whenever someone in power needs him to rabble rouse.  His scenes are largely separate from the rest of the cast (be it the group portraying those in England or those in Scotland) and while great for the oratory involved, one can’t help but think that the time could have been better spent elsewhere.

Perhaps that is the feeling one most gets leaving the movie – that sense of wondering why Rourke and Willimon would have chosen to focus on these particular moments and avoid others.  Why offer up a story of this mirroring between Mary and Elizabeth only to dump it for a while and then return to it later, but never with the same gusto.  What is the message that the audience is meant to receive?

With beautiful sets and costumes and hair and makeup in addition to two great leads and wonderful supporting actors (including Guy Pearce, Gemma Chan, Joe Alwyn, and Brendan Coyle) and a crackling first half, “Mary Queen of Scots” is a let down.  It is a movie which doesn’t offer the insight it might into either character, which doesn’t see through this mirroring, which feels more interested in prurient details than detailed explanations.

This is another case of film where I desperately want to give the filmmakers a do-over.  Take the same cast and crew and figure out a different way to go about it.  All the pieces, save the script, are in place to make something powerful and long-lasting.  Heck, this is a movie that seems proud of Mary’s being able to get her son, James, onto the throne but seems to content to ignore the fact he wasn’t a great King and his son’s rein ended when Charles I lost his head.  Mary may have put her family on the throne, but their time in power isn’t particularly well-remembered.

Dealing with history can be difficult as there is so much of it, but the bits and pieces chosen and highlighted in “Mary Queen of Scots” never form a complete, satisfying picture.

‹ “Mission: Impossible – Fallout,” “Scrooged,” and Being a Good American
Movie Review: “Divide and Conquer: The Story of Roger Ailes” ›