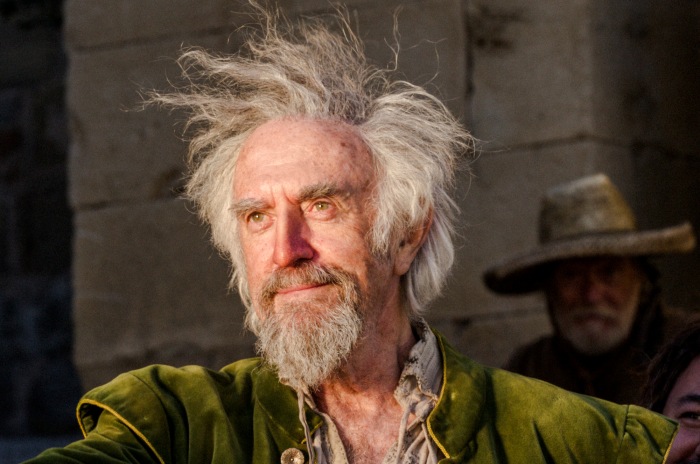 It seems so very improbable that after decades trying to make “The Man who Killed Don Quixote,” Terry Gilliam’s movie is going to finally hit theaters here in the United States.  In fact, it is a remarkable enough occurrence that cards before the movie note the oddness of the long gestating work actually existing.  But, exist it does, and it is marvelous.

Despite whomever may have initially been intended to star in the film, or any interim iteration of the film, it is Adam Driver and Jonathan Pryce who take the leads here.  The former is Toby, an advertising director, and generally wretched human being, who at one time had artistic aspirations. The latter is Javier, a cobbler whom Toby convinced to star in a student film he made more than a decade ago entitled “The Man who Killed Don Quixote.”

The details of the plot after that are certainly up to interpretation, but no one could argue that they involve Toby in Spain to shoot a commercial, seeking out the former actor, and finding that—at least after meeting Toby—Javier truly believes himself to be Don Quixote.  Toby winds up as his Sancho Panza and the movie is off the races.

Both men, Driver and Pryce, are phenomenal here.  One is never quite sure what Quixote believes to be true, or why, and Pryce sells it with wit and panache and more than a little heartbreak.  Toby, who winds up having visions/nightmares/delusions, is the primary character here, the one on the emotional journey, and Driver delivers the improbable arc in enthralling fashion.  The actor takes us from seeing this wholly unlikable director to truly feeling his plight, and making it all true.

In the above paragraph, the word “improbable” appears.  It appears in the first paragraph of the review as well, and for good reason.  Everything about this movie from the story it tells to the story of it being made in the first place is so very unlikely.

The film itself (not the film within the film, or the Quixote-based ad within the film) finds Toby shifting into and out of various realities.  Gilliam carries these shifts off with such precision and fluidity that one is never quite sure what is real and what is not.  More than that though, Gilliam and company give us a movie where none of that matters.

What is truly important is Toby’s recognition of who he ought to be and what that means for him and those around him.  He is someone who has lived his life without looking back, but once he is forced to confront what he has done to Javier and Jacqui (Olga Kurylenko), who played Dulcinea in the student film, his world his shaken to the core, which is what causes this nightmares/shifts in reality.  It is all this incredibly deft work, with reality mirroring (even if in funhouse fashion), bits of the Quixote tale by Cervantes.

To boil it down because this review has been rather windy, what Gilliam has made is a film which operates on a number of levels, and in a number of realities.  It is a movie that is so very accessible—so very watchable—and yet which constantly has the viewer wondering about the truth behind what they are seeing.  This critic has no doubts that when he gets the chance to see the movie a second and a third time, it will continue to reveal itself – bits and pieces which didn’t initially come across at first will be evident.  It should be also noted that I greatly look forward to more viewings.

Anchored with superb performances from its two leads, and great supporting work from Kurylenko, Stellan Skarsgård, and the rest of the cast, “The Man Who Killed Don Quixote” is a beautiful film.  It is not just gorgeous to watch, but it is this amazing dream of a story.

We will never know what the earlier versions of “The Man who Killed Don Quixote” might have looked like, or what anyone else may have done in the roles, but no one will be disappointed with what we have been given.  It is a tremendous dream of a movie made real.