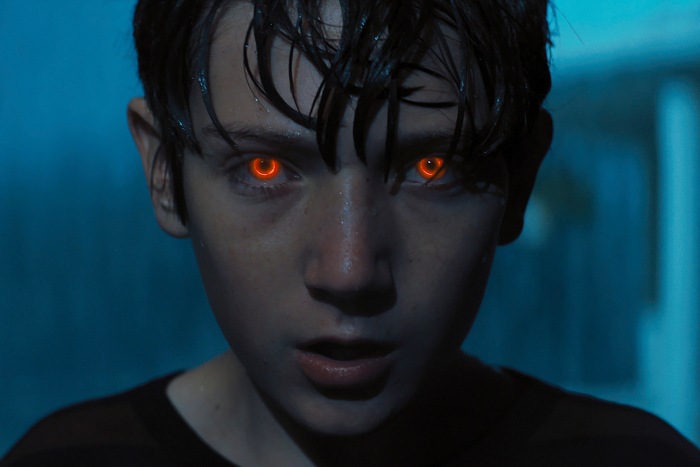 As you may have noticed, superheroes are all the rage today.  You can’t go to a multiplex without having a superhero movie playing on multiple screens or trailers for several upcoming films or lobby cards or some combination thereof. It therefore seems like “Brightburn,” a film following the story of a supervillain, was an inevitability. Of course, that may be the biggest issue with the movie – the inevitability of it all.

Directed by David Yarovesky with a script from Brian Gunn & Mark Gunn (and, the movie will be quick to point out, produced by James Gunn), this is a movie which manages to stun with its viciousness, to impress with its sense of evil, and to completely and totally disappoint with its yawn-inducing narrative.  It exhibits so many of the pitfalls of a superhero origin story without ever bothering to stray from the basic idea of such a film save for making the character evil.

In point of fact, one of the reasons “Brightburn” fails to impress on a narrative level is its desire to so closely hew to the Superman story.  The easiest way to explain the film is to say “it’s young Superman, but evil.”  So, a spaceship crashes at a farm in the middle of the country and a married couple unable to have kids—Tori (Elizabeth Banks) and Kyle (David Denman)—adopt the alien baby.  The spaceship is hidden away in the barn and as the child, Brandon (Jackson A. Dunn) approaches his teen years, he realizes that he’s different; he can do things other kids can’t.  And, if that’s not enough Superman for you, there are plenty of winks and nods (“Easter eggs” to use the common parlance) along the way to drill the point home.

On one level it makes complete sense why someone would want to do the Superman tale but evil – Superman is the best known superhero with the best known origin story.  He is the boldest and the brightest in the canon; the true embodiment of a series of ideals to which we all aspire.  This movie, however, fails to bring anything to the table of that ilk.  It defines itself entirely by absence rather than presence.  There are no larger ideas at stake.

Thought of an other way, something like “Red Son” takes the notion of Superman and says, “what if the same guy was raised elsewhere in the world, how do things change?” “Brightburn” says, “what if Superman liked to strangle puppies.”  Not only that, but the new film then only offers Superman figuring out his favorite way to do said strangling.  The interesting thing is the set of ramifications of the change, not the change itself, but this movie never contemplates those ramifications.

In the place of such thoughts, “Brightburn” offers some stunningly brutal deaths.  There is a certain amount of glee with which Yarovesky has blood ooze out orifices in order to induce squeals and gasps from an audience.  It is all quite effectively done, but to no purpose beyond the blood itself.

On top of all of that, while Banks and Denman are more than engaging in their roles as poor Brandon’s parents, Dunn has little to do outside of offering repeated menacing glowers. This, too, is not enough.  The audience is offered too little of Brandon’s inner thoughts.  Worse still, “Brightburn” even seems to blame the spaceship itself for the child taking the dark path as opposed to him just being evil.  It feels like an undercutting of the movie’s own premise.

“Brightburn” is sure to enthrall those who go to the theater to see blood spilt.  It is likely to please a group of horror aficionados and lovers of superhero films.  It may even spawn a whole subgenre of such films.  Hopefully any such film is more complex than this one, because it really is a good idea squandered.