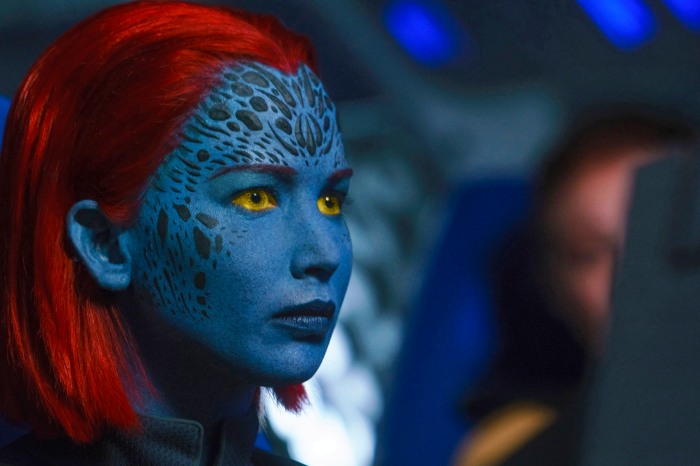 At one point in “Dark Phoenix,” the new X-Men movie, our heroes are being held captive on a train.  The armed baddies holding them have patches on their shoulders that read “MCU.” Is this, like so much of the rest of the film, just an ill-considered element, or has writer/director/producer Simon Kinberg placed the patch their with purpose?

The question is not irrelevant – “Dark Phoenix” may very well be the last time we see this group of mutants on screen in this continuity.  That is, with Disney purchasing Fox, there has been scuttlebutt for a long time that this is the last appearance in the series by James McAvoy, Michael Fassbender, Nicholas Hoult, Jennifer Lawrence, and the rest of the cast. To this point, the mutants have existed separately from the Marvel Cinematic Universe, but that is all about to change.  The mutants will, eventually, be a part of the big, bad, MCU.

Are the mutants in this film then being held by the MCU as a statement on the franchise or its legacy or is it just random?  I wish I had a clear answer.

As a franchise, X-Men has had some incredible highs (“X2:  X-Men United,” X-Men:  First Class,” “X-Men:  Days of Future Past”) and some horrible lows (“X-Men:  The Last Stand,” X-Men: Apocalypse”).  Unfortunately, if this is the last main entry in this continuity (perhaps “New Mutants” will eventually be released), it is going out more with a whimper than a bang.  This is not the nadir, but it isn’t a good farewell.

This particular film tells the story of Jean Grey (Sophie Turner) turning from a hero into the malevolent Dark Phoenix.  How exactly that happens here is a little up in the air.  Kinberg’s film (his first) offers up a tangled web of ideas, with none terribly well explained.  So, while Jean always had the power to be evil, she hasn’t been evil because Professor X (McAvoy) hid some stuff from her because it was easier to do that than work through her problems.  But when a solar flare that’s not a solar flare but really something else (don’t ask what, I couldn’t tell you and I’m not entirely sure the filmmakers could explain it well either) affects her, the evil comes out of Jean.

Did then the not-a-solar-flare make Jean evil?  Did it enhance her abilities?  Did it simply make her aware of her full potential?  These are rather important questions when you’re talking about the mind of the main character in the film, but no satisfying answer is forthcoming.  It is discussed, but never feels truly explored.

It is equally foolish to try to understand what is going on with the evil aliens (led by Jessica Chastain). They’re the main bad guys here (if you don’t count Jean), but they have virtually no story.

There are, of course, new mutants in “Dark Phoenix” as well, and while it is easy to tell that one has incredibly powerful hair with which he can whip people, the exact abilities of the other are more nebulous.  Both bad guys seem to exist more so that there can be new mutants in the movie than for any other reason.  It is entirely possible that they are given such short shrift that they aren’t named until the credits (if they have names before that, they are said quickly in passing).

As should be apparent by now, this is a movie where things simply happen, with little to no logic behind anything except that it might look cool on screen.  At one point, Magneto (Fassbender) raises a subway car from underground, maybe to block an entrance to a building.  He could’ve just used cars on the street for the same task; that would have been easier and also would have meant that people couldn’t simply walk through the subway car to reach the door, but heck, his raising the subway car is a cool effect, so it’s there.

While McAvoy and Lawrence are able to lend weight to their characters, Turner is not.  No small amount of the problem is, as noted above, the confusion surrounding what precisely is taking place.  It is clear Jean is angry at having been wronged, but the character never moves past anger and confusion.  By the same token, there are the beginnings of a great story for Professor X and the intimations that there could have been one for Magneto (Fassbender), but they never get beyond the start lines.

While some of the action sequences are a good deal of fun, everything around them is too confused for the action to be a worthwhile reason to go see the movie.  Perhaps if we cared about the characters more or understand better what was happening and why this wouldn’t be the case.

At their best, the X-Men films deliver deep and powerful stories about what it means to be human and what it means to be outside the perceived norm of humanity.  The movies may dazzle with special effects and fisticuffs, but all of that would mean nothing without the back and forth conversations focused on lofty ideals and goals.  While “Dark Phoenix” has a whole lot of talk, and some of that talking does provide a resolution or two, it does so with the same lack of purpose of the rest of the story – one talk may succeed in changing a mind where an earlier one did not because the latter talk has to succeed for the story to progress.

“Dark Phoenix” is a disappointing way for Lawrence, McAvoy, and Fassbender (the last of whom is criminally underutilized) to end their days with the franchise. “First Class” and “Days of Future Past”  showed just how great this timeline could be.  It is too bad that the films which followed never built on those successes.

Maybe the MCU isn’t shackling the X-Men so much as freeing them to live up to their full potential.

‹ Movie Review: “Framing John DeLorean”
Documentary “For the Birds” is Anything but ›