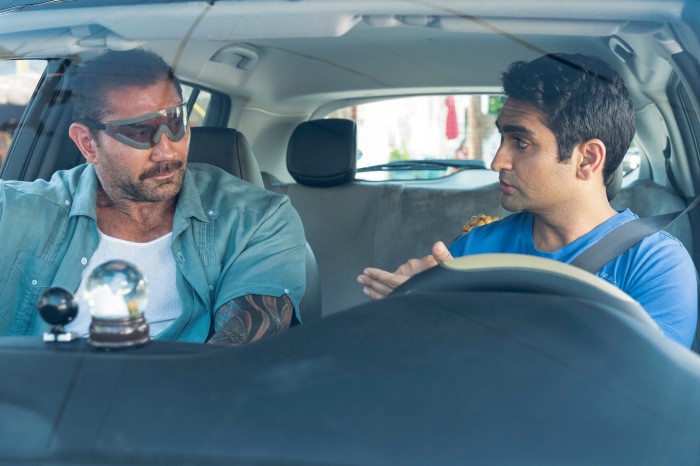 The buddy comedy is a tried-and-true genre, one which offers up ample opportunity to not just deliver big laughs but explore differences between personalities as well.  Some of the greatest films ever made fall into the category—especially when you expand the category slightly to include buddy action comedies—and the new Dave Bautista-Kumail Nanjiani film, “Stuber,” attempts to find its place in the pantheon.  It fails.  The film is an unfunny mess hampered by generic writing, mundane action, and an almost complete lack of humor.

Directed by Michael Dowse with a script from Tripper Clancy, the story sets up the tough-as-nails Detective Vic Manning (Bautista) on the hunt for a drug kingpin Tedjo (Iko Uwais). Sadly for Vic, his big chance to get Tedjo happens to be a few hours after the cop has undergone Lasik surgery, rendering him unable to see clearly and, consequently, drive.  Enter Stu (Nanjiani), a sporting goods store employee who drives an Uber on the side.  Yes, Stu + Uber = Stuber, and while the joke is supposed to be a bad one made by Stu’s inane boss (Jimmy Tatro), it’s still about as clever as the movie gets. Well, that and placing a Jewish family at a Chinese restaurant on Christmas; “Stuber” is nothing if not an equal opportunity offender.

As Bautista’s Vic is the hard-nosed cop, it falls to Stu to be the sensitive soul, the one pining for his best friend, Becca (Betty Gilpin), and convinced that by being the nice guy he can finish first.  Something of a sad sack, Stu’s kindness is played for laughs just as much as Vic’s tough guy stance, but Clancy’s script has it in for Stu more than it ever does for the cop.  Stu is in fact so oblivious to what’s going on around him that it doesn’t really seem to bother the Uber driver all that much when Vic takes a gunshot victim to an animal hospital instead of a human one.

There is actually a serious question here about whether Vic is a good cop that can, and should, be asked. Without a doubt, Dowse and company want us to believe he is, just that he’s on a crusade to avenge wrongdoing, but there are more than a few moments where Vic goes way too far past what is acceptable.  Somehow though, the movie never recognizes this as an issue (except for where it may impinge on Vic’s relationship with his daughter, played by Natalie Morales). “Stuber” is willing to accept any and all illegal behavior on Vic’s part because… well… maybe because it allows ill conceived and poorly executed story to keep moving.

Over and over again, “Stuber” opts for easy answers and jokes—male strippers can be sensitive, electric cars don’t have gas—rather than plumbing the depths of an issue. There is no idea that feels too obvious for the film to avoid.

Things don’t get better with the action sequences either.  Dowse employs a shaky camera technique that makes all other shaky cam shots look wonderfully smooth and placid by comparison.  Consequently, despite having two actors in Bautista and Uwais who are well suited for fight scenes, the audience begs for any such moments to end almost before they start.

How so many talented people—the cast also includes Mira Sorvino and Karen Gillan—got themselves trapped in such an unfunny comedy is a question.  It isn’t as big as question as why the plot here is such a jumbled mess or why characters make the horrific decisions they do, but it’s still a question.

With “Stuber” it appears that the late summer doldrums may be starting early at theaters this year.  Unless you find yourself desperate for air conditioning during a heat wave and this the only option for such relief, skip it.  The movie isn’t going to kill the buddy comedy, but it’s not for lack of trying.