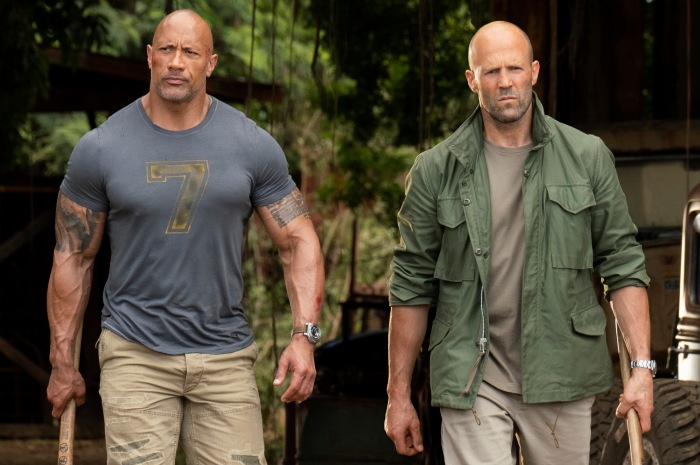 People will tell you that a preponderance of summer movies are big, loud, and stupid.  Whether or not that’s the case, blockbusters don’t come much bigger, louder, or more stupid than this week’s “Fast & Furious Presents:  Hobbs & Shaw.”  Frankly, it’s wonderful.

Directed by David Leitch and reteaming Dwayne “The Rock” Johnson and Jason Statham, this “Fast & Furious” spinoff has franchise favorites Luke Hobbs (Johnson) and Deckard Shaw (Statham) off to save the world… again.  As the film doesn’t have some of the other big names of the main series (Vin Diesel, Michelle Rodriguez, Tyrese Gibson, etc.), “Hobbs & Shaw” has gone out and gotten Idris Elba, Vanessa Kirby, and more than a few solid cameos to shore things up.  It probably wasn’t necessary, but it definitely doesn’t hurt.

Elba is brilliantly fun in his role as Brixton, a bad guy who has been augmented with technological-based superpowers.  Yes, he’s a cyborg but this is a film universe that left reality years ago and is all the better for it.  Elba is over-the-top, chewing scenery at a rate only equaled by The Rock and Statham.

The world may be at stake in “Hobbs & Shaw,” there’s a virus that can wipeout all of humanity and will be set on its inexorable course in 72 hours, but that doesn’t stop Hobbs and Shaw from ceaselessly jawing at each other in ways that range from somewhat obscene to downright cruel.  That’s okay though, the audience has no doubt that before the credits roll, the two men will still hate each other but have somehow saved the world. And, it’s not spoiling anything to say that humanity isn’t destroyed by these two buffoons, the jokes wouldn’t be so funny if the world ceased to exist.

Perhaps it is already obvious, but in case not, stopping to think about anything that takes place in the movie is downright dangerous.  Even ignoring the cyborg thing and the virus explanation, “Hobbs & Shaw” goes well past the bounds of that which is credible – it just doesn’t matter. Watching Johnson jump out of the window of a skyscraper and slow himself down buy beating up on guys works. Seeing Statham slide a McLaren under a couple of 18 wheelers is a joy.  There’s some problem with Leitch’s direction in that what follows the slide isn’t as cool as it ought to be, but the bits that don’t work are minor in comparison those that do.

There will be other reviews out there that complain endlessly about the film’s factual problems – the 72 hours feels like it lasts for a lot longer than that, the timing of the final battle is wonky, any number of stunts presented are impossible.  The list of issues is, potentially, endless. But here’s the thing – they don’t matter.  Johnson, Statham, and Elba ooze charisma and all three men are the top of their game. Each one is immensely funny while still pulling off a brooding, slight malevolence.  There may be a few too many nods to what will happen in any future installments of the series, but people are going to leave the theater desperately wanting to see said films.

One of the most impressive things about “Hobbs & Shaw” is not just that it all works, but rather that the movie stays true to its “Fast & Furious” branding without making knowledge of those films necessary.  It opens by showing us just who the two men at the movie’s center are. It offers the differences in their routines and lives, while noting that, perhaps they are more alike then either would care to admit.  It is a great opening that instantly draws even the most wary of viewer in.  Then, not only are their ridiculous car stunts, but this is a film all about family, with us getting more time with Hobbs’ daughter, and Shaw’s sister, Hattie (Kirby) playing a major role in the goings-on.

It may be over-the-top and ridiculous and hammy, but “Fast & Furious Presents:  Hobbs & Shaw” might also be one of the best times you have at the movies this year.