Movie Review: “Blinded by the Light” 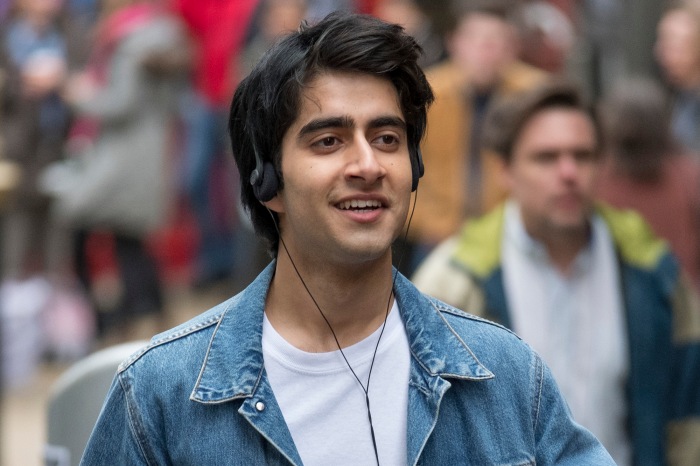 The strength and determination it must take to go to a new country, a place where people speak a different language, look at society differently, act differently, live differently, is incredible.  Even taking such an action believing it will better you and your family doesn’t diminish the difficulties inherent in the action.

Such is the choice made by Malik (Kulvinder Ghir) years before “Blinded by the Light” takes place.  Malik and his wife, Noor (Meera Ganatra), left Pakistan in order to pursue a brighter future in Luton, England.  By the mid- to late-’80s, their children—Javed (Viveik Kalra) and Shazia (Nikita Mehta)—struggle with their heritage in England.  This period and place depicted in the film are full of hatred and racism towards Pakistanis, and the audience watches as Javed struggles to find out where he belongs.

Watching Javed being chased down for daring to have darker skin in England or seeing his family assaulted during a National Front parade is heartbreaking, and director Gurinder Chadha depicts the hatred and its results with a horrible clarity.  It is a moment from the past with clear echoes to today and in countries behind the United Kingdom.  Those echoes are purposeful and relevant and not to be forgotten or ignored.

The story in the film (with a screenplay from Sarfraz Manzoor, Chadha, and Paul Mayeda Berges and based on the book by Manzoor) finds Javed seeking solace from his troubles in the works of Bruce Springsteen.  Introduced to Springsteen by his friend,  Roops (Aaron Phagura), Javed hears in the songs the tales of people trying to get by in their daily lives, trying to hold on to a lighter, happier, view of the world even when the daily grind makes it difficult.  Through the music, Javed finds himself encouraged to take chances, to venture outside his comfort zone, and to take part in some minor rebellions against his parents.
Or, more accurately, rebellions that many might consider minor, but which to Malik are massive.  Javed, already taking classes of which his father wouldn’t approve, leans into writing instead of pursuing a more obviously lucrative path. Javed starts dating which is bad enough, but the girl, Eliza (Nell Williams), isn’t Pakistani and that doesn’t help matters.  The list of rebellions grows as does Malik’s stress about them, all of which takes place on top of the father’s having been laid off.

“Blinded by the Light” does a wonderful job depicting the difficulties that lie therein, the struggles of immigrants and their children, the hardships of living in two different worlds at the same time.  Even those who have not experienced such a balancing act will understand it with ease.

Where the movie does less well is with its cast of secondary characters outside of the family.  A number of people weave in and out of the movie, appearing momentarily and seeming that they might have a story of their own, but then disappearing just as quickly only to reappear as needed for the larger tale later.  This happens with Javed’s best friend, Matt (Dean-Charles Chapman); his teacher, Ms. Clay (Hayley Atwell); Eliza herself; and a next door neighbor; and more.  Rather than feeling like humans, they come off as plot devices.

Chadha’s film also exhibits some problems in its balancing of the real world and Javed’s post-Springsteen awakening.  There are a couple of not quite musical numbers, but at the very least over-the-top dance sequences.  The first is rather amusing, but by the time the second one arrives there is a definite question about the movie’s awkward tonal shifts and whether it operates in the real world (it is based on a true story) or a fictional one.

Even so, there are moments of utter beauty in the film.  The viewer is offered, more than once, Springsteen lyrics swirling around Javed’s head as he tries to come to grips with their meaning and how that meaning relates to his life.  It is a wonderful technique that offers the power and import of the lyrics.

“Blinded by the Light” may take place 30 years ago, but, regrettably, it is still relevant today.  Yes, in the push and pull between teens and parents, but more disturbingly in the hatred of the other that is experiencing a resurgence in our society.  With white nationalists on the march in the U.S. and a leader in the White House who seems—at best—unwilling to confront that hatred, Chadha makes it clear that we are to take away a message of warning.

One wishes that simply watching the movie, taking a moment to understand where others are coming from, would be enough to diminish such hatred, but that is unlikely to be the case. Perhaps there is a Bruce Springsteen lyric that would convince people to show a little bit of understanding, but this reviewer wouldn’t bet on it.