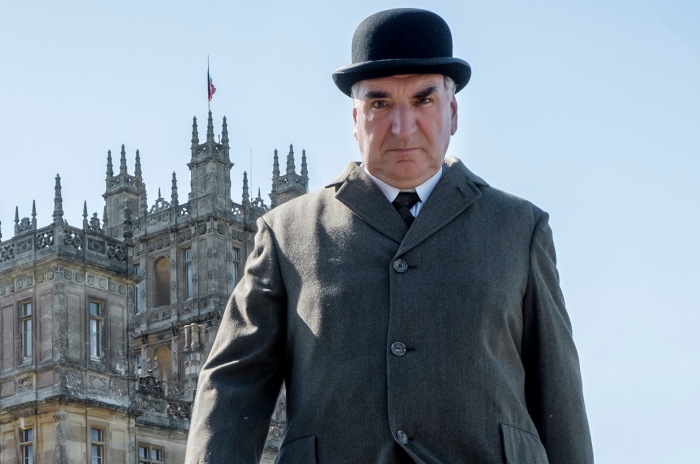 Taking a television series, particularly a beloved one, to the big screen is an incredibly difficult task. Amongst the myriad of potential problems is the issue of needing to come up with a story worthy of being a movie in theaters as opposed to just a slightly longer episode.  Then there’s the question of whether one should make sure that the characters are all appropriately serviced, or cut the number of people on which the film focuses.  With the “Downton Abbey” film, series creator and the movie’s writer, Julian Fellowes, has certainly found an appropriate story for the big screen but he struggles more when it comes to winnowing down the characters on which he wants to focus.  In fact, he opts to give so many characters plotlines that those who don’t have one stand out rather awkwardly.

In fact, what we have with this movie directed by Michael Engler (who directed several episodes of the series) is a film that feels as though it has taken nearly a season’s worth of storylines and tried to condense them all into a two hour film.  Yes, some of the character’s are given short shrift (most noticeably Brendan Coyle’s Bates), but even those who are front and center feel as though much of their tale has been left on the cutting room floor. Other plots, like one involving missing items at the Abbey, are not just short, but practically non-existent, serving little to no purpose whatsoever.

In similar fashion to the series, the best moments of the movie are the ones with Maggie Smith delivering one withering line after the next.  The character, Victoria Crowley, is not only the best one the series has to offer, but Smith plays it with deftness, making an easy comedic villain into someone far more complicated.  When Smith and Wilton are opposite one another, the dialogue is as witty as “Downton” has ever been.  There are a number of laugh out loud moments in the film and the vast majority of them involve these two women.

Fans of the series will, by and large, truly enjoy what Fellowes has offered them in this story involving the King and Queen visiting Downton.  It is, perhaps to repeat myself slightly, a return to the Abbey and the characters, costumes, and sets which the audience came to know and love during the show’s run.  It is fun watching the individuals, both upstairs and down, deal with the arrival of the Royals, and the troubles they run into with the pomp and circumstance of the event feels wholly appropriate.

The exact actions they take to alleviate the problems, however, feel wrong.  In fact, they feel so amiss that on at least one occasion a character notes that they have acted in a manner completely out of keeping with who they are.  Both the action and this response feel cheap and wrong and diminish the whole affair.

This may be the last movie we see with the characters, but if it isn’t, there are certainly hints about the subject for the sequel.  It is actually an idea that may be moderately more interesting than the one offered here even if this one does the job.

To be sure, “Downton Abbey” isn’t a great movie.  It is gorgeous to look at and largely fun to watch, but it is perplexing in its organization and subplots.  It is not a well-made film, leaning far too much towards fan service over something deep and meaningful.  There are hints of the latter, unquestionably, but far too little for a series that was so great.

‹ Michael Waltrip on Surviving Change in the “Blink of an Eye”
Movie Review: “Ad Astra” ›