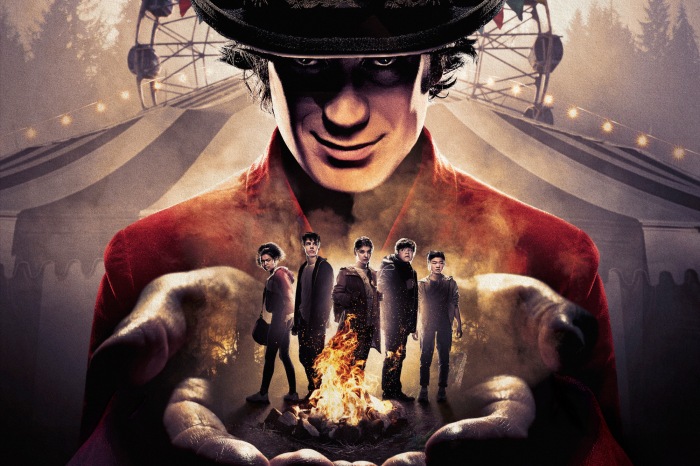 I was a little too old to watch “Are you Afraid of the Dark?” the first time the series came around, but maybe I’m old enough once more now that the show is back for a miniseries airing on Nickelodeon this month (adults being more willing to watch shows for younger children than teens).  Being slightly more into horror now than I was a kid, naturally, I had to check out the panel on the Friday of New York Comic-Con.

Two people who weren’t too old for the series though are Matt Kaplan and BenDavid Grabinski.  They grew up watching and now they are two of the minds behind the reboot.  Kaplan, in fact, said it was his favorite show as a kid.

Wait… did I say “miniseries” up in that first paragraph?   Indeed I did – miniseries.  The new “Are you Afraid of the Dark?” show is a three-parter with one part airing each Friday starting October 11th and ending October 25th.  Each night’s festivity is an hour-long and starts at 7:00pm.  As for the story?  It’s all about the Carnival of Doom and its ringmaster Mr. Tophat.  Not only that, but the evil stuff is actually in the real world, not just the story being told by the youthful members of the Midnight Society. Grabinski promised that while the Society is in peril here from Mr. Tophat, this isn’t really just a stories coming to life sort of thing.

Stepping back, on the dais for the panel were executive producers Matt Kaplan and Grabinski (who is also the show’s writer) alongside actors Jeremy Ray Taylor, Lyliana Wray, Miya Cech, Sam Ashe Arnold, and Rafael Casal.  Casal is Mr. Tophat, whereas all the others make up the new Midnight Society.  Laura Prudom of IGN led the panel, all the members of which came out as the opening sequence of the original show played on a screen above.

I may not have watched the original show (at least not regularly), but even I knew the credits sequence and one of the first things that was said at today’s panel is that the new sequence will be a “loving homage” to that original.  I’m assuming it’ll be 16:9, not 4:3, but we’ll see.

Grabinski noted the difficulty doing this sort of show that is meant to appeal both to today’s kids and the folks who watched the original version.  He promised that people looking closely at the new series will notice a whole bunch of things pulled out of the original as well as references to other horror fare.  There are even actor who appeared on the original series who will pop up here (no, not Ryan Gosling).

As for scares, Grabinski told a story about needing to go and stop the director, Dean Israelite, as it was all going too far.  The elements being filmed, Grabinski said, were closer to an R-rated movie than something meant for 10-year-olds.  The producer also noted that when they were watching the episodes, Nickelodeon never suggested anything be dialed down.  They let the creative team do their thing.

So, what does it all look like?  We were shown a clip (embedded below) that featured freaky clowns, underwater zombies, and a magically unscrewing ferris wheel.  All of it, apparently, at the Carnival of Doom, orchestrated by Mr. Tophat, and definitely the sort of thing that could cause some viewers unease.

To get the cast playing the new members of the Midnight Society in the mood for all these shenanigans, the producers assigned the kids to watch movies including “Goonies,” “Monster Squad” (which they didn’t watch), and “Lights Out.”  How much influence any of those has in the final show remains to be seen, but we were told that Mr. Tophat is like an evil Willy Wonka.  Grabinski and Casal had met each other on “Blindspotting” and when Grabinski was coming up with ideas for this series, having Casal play such a role was one of his wishes.

It may not be exactly meant for me, but I am certainly intrigued and want to find out more about this new Midnight Society and just what it looks like when the group telling the stories is in danger.  Happily, I only have to wait until next week for that.