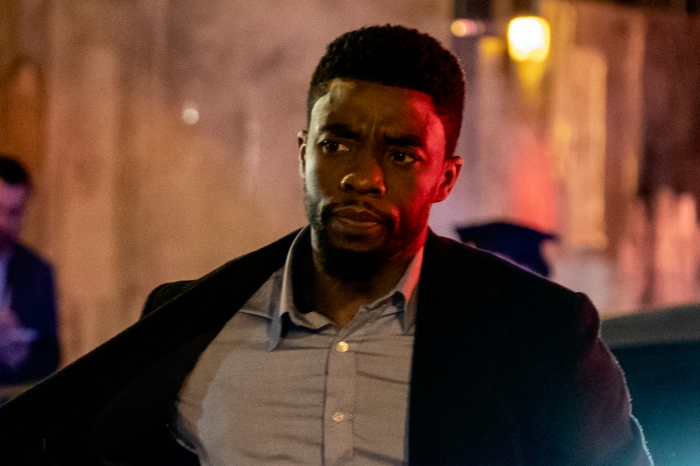 The new Chadwick Boseman film, “21 Bridges,” takes its name from the 21 bridges that lead on/off the island of Manhattan. The basic notion of the film is that an NYPD detective, Andre Davis (Boseman), is tasked with finding robbers who, in carrying out their crime, murder eight NYC police officers. To do this, Davis convinces his superiors that it is necessary to shut down transportation on and off the island of Manhattan – to close all 21 bridges (and the trains and the subways and the tunnels and the rivers, but it’s too long a title to include all that stuff).

It is a bad plan and one that is wholly undersold, with any number of mistakes in the idea. On a purely logistical level, the decision is made in a split-second and without a call to a higher-up. That feels like an impossibility. Then, so much of what follows in the film makes the closing of the island irrelevant. It feels as though the writers of the film, Adam Mervis and Matthew Michael Carnahan, were looking for a way to keep these robbers on the island without having someone in the audience watching the movie complain that the bad guys should’ve just taken the ferry to Jersey and so they backed into the notion of closing the city down and then just reworked the script a little to try to justify it.

If there is a way to make this notion work it doesn’t appear on screen. Nothing that comes before the closure does so and nothing that follows the closure makes it feel important that it occurred. More than anything else, this is the biggest problem with the movie – it never feels like anything more than a cheap gimmick. To be clear, there are plenty of other problems in this Brian Kirk directed movie, but this is the most egregious.

To the film’s credit, Boseman is teamed with Sienna Miller as narcotics officer Frankie Burns, and continually runs into J.K. Simmons’s Captain McKenna, the man in charge of the precinct where the officers were shot. The two actors give it their all, helping boost a tale that is plagued by silliness.

One can never quite determine the point of “21 Bridges.”

Is it to tell a tale of corrupt police officers? Maybe, but it isn’t a new or different or clever telling. The audience knows who is dirty relatively early on, with the movie tipping its hand in foolish ways and eliminating any surprise in the “twist.” The reasons for the corruption only come in at the end and feel as silly as empty as the logic by which the bridges are closed.

Is it to tell us about this one detective trying to make up for his father’s death when he was young (also a police officer, the father was shot in the line of duty)? From the start of the film, we know that Davis has been involved in a number of shootings, all of which have been determined to be justified, but the officers around him aren’t sure. They want him to go out and murder the two robbers. Davis insists that he has never done anything wrong and the movie doesn’t ever explore the issue. It comes up repeatedly, but it is never expanded upon; it’s just the same thing every time, where a cop reminds Davis that he has killed before and Davis says it was justified. Over and over again. No added depth, no added nuance, no added thought.

Is it a tale about the trouble these two robbers get themselves in? In part maybe, but even though we get some background into the two men, they are never really portrayed as anything more than robbers who have gotten in over their heads. Their actions never seem affected by their backgrounds and they never do anything in the movie more than run from place to place trying to figure a way out of their troubles.

Is it to explore what happens to the island of Manhattan when you shut it down even for a few hours overnight? One of the reasons against doing it is the holy hell it would raise, but the movie never follows up on this point. In fact, once the city is closed there are absolutely no repercussions whatsoever, just a ticking clock over Davis until things are reopened (and I’m not even sure they stick to reopening things when they say they will, but would have to watch the movie again to be absolutely certain).

No, the most likely point of the film as it appears on screen is to allow for a way to give the the audience a whole lot of truly horrible violence. From a casual shot of a man missing fingers, having had them blown off, to repeated scenes of people bleeding out, “21 Bridges” is filled with gruesome images. It tries to satiate some sort of bloodlust in the audience, attempting to garner cheers and gasps as people go down.

In this last arena, the movie succeeds. It’s got a number of shootouts and the whole thing is one big chase. It just doesn’t have much of anything solid backing that up. It feels like a bunch of half-baked ideas that have been thrown into a blender. Boseman and the cast try to make a go of it but there’s not enough for them to hold onto. All of those concepts have been turned into movies before, and they’ve been turned into better ones than this.

With apologies, this reviewer thinks that if you have the opportunity to see “21 Bridges,” you should instead escape from New York.