A Quick bit of Embarrassment: “Come to Daddy” 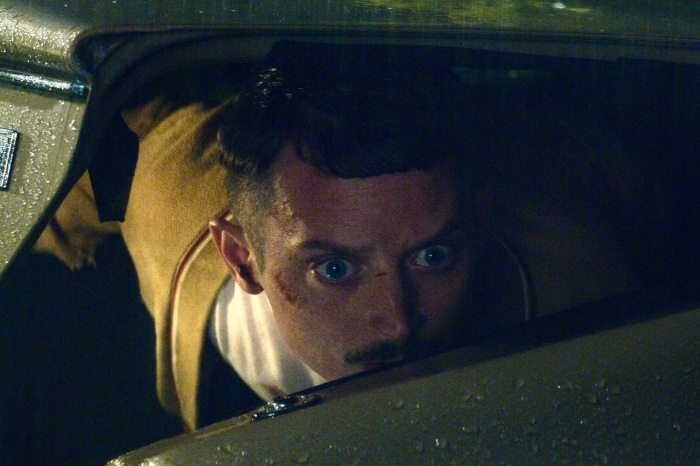 It’s not that the title wasn’t kind of familiar, but “Come to Daddy” isn’t especially out of the ordinary either. It’s not that the notion of Elijah Wood working with Ant Timpson didn’t tickle the back of my mind, but they’ve worked together (as producers) before with “The Greasy Strangler.” It’s not that Elijah Wood being in a small, dark, offbeat, sort of a film didn’t spark something, but Wood does offbeat stuff now (and good for him for doing what he wants to do).

Without a doubt, when I got to the local Alamo Drafthouse and saw a pen in a ziploc bag at every seat, that didn’t mean anything to me. It was a pen covered in… something, I couldn’t tell, but it was kind of dark and icky and I wasn’t going to open it and touch or smell the substance. Absolutely meant nothing.

When the screening of “Come to Daddy” started though, I saw the haircut Wood’s character, Norval, was sporting, and that haircut I definitely knew. When Norval arrived at his father’s house, that was unquestionably familiar. And finally, when Stephen McHattie’s character opened the door and greeted Norval as his long estranged son, I was fully convinced – I had definitely seen this movie before.

I tell you this, but it is all a little embarrassing. Maybe not insanely so, but a little. I watch a lot of movies and on occasion I can’t remember them all that well. So, I hear that a movie is new and hitting theaters in the next few days, and I’m all the more convinced that I haven’t seen it, even if bits and pieces sound familiar (after all, so many movies sport bits and pieces from so many other movies that a sense of deja vu creeps in from time to time). Sometimes though there is a movie that plays at a couple festivals, ones that I’ve never been to but get a few screeners for, and I see things far earlier than I might otherwise. This is what happened with “Come to Daddy.”

The good news here is that the movie is—if you like dark, offbeat, bloody, weird films—a really enjoyable one. My review last April gave it four stars, and I stand by that. I also stand by the movie having some pacing problems.

But, I’m not going to lie, while there are plenty of reasons for me to have believed I hadn’t seen it before, not remembering the movie until it started makes me feel a little foolish. At least, I guess, I remembered it then and was exceptionally pleased after seeing it as an online screener to get the chance to watch it on the big screen. Like most movies, it works better in a theater.

So, as a bit of a reminder to myself and to you, let me tell you that after playing Fantastic Fest, Tribeca, and other festivals, “Come to Daddy” is coming to theaters and on demand this Friday, February 7.

If you’re looking for weird, you’ve found it.  As for me, I’ll remember the movie now forever.

‹ Jesus Figures in both Horror and Comedy
Movie Review: “Birds of Prey (And the Fantabulous Emancipation of one Harley Quinn)” ›