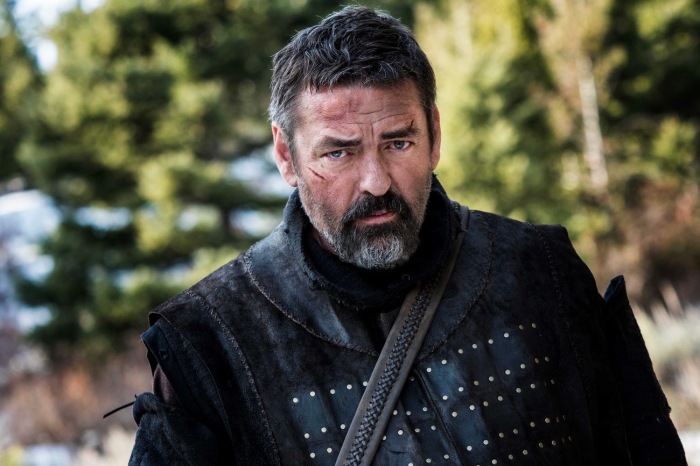 Although Richard Gray’s latest film is called “Robert the Bruce,” the title character, who is played by Angus Macfadyen, isn’t really the lead. Yes, Macfadyen played the role previously in “Braveheart,” and this movie picks up several years after the events of that film, and Macfadyen even wrote the script for this movie (alongside Eric Belgau), all of which may lead one to believe that Macfadyen’s part is the lead, but, again, it isn’t. This is a movie about a widow, her niece, her nephew, her son, and their lives. They take in Robert the Bruce when he is injured, and their lives do change because of it, but it is far more about them than him.

Wonderfully, this is a movie which looks at what it means to be a leader, not just for the person doing the leading, but for those who have to choose whether or not to follow. It is about harnessing the love and admiration of the populace, of fighting the good fight for those one is supposed to be leading. It is, in short, about the responsibility of leaders to their people and vice versa.

“Robert the Bruce” begins with the story of how Robert the Bruce beat John Comyn (Jared Harris), after being betrayed by Comyn when the two were meant to be signing a truce. We hear the aforementioned mother, Morag (Anna Hutchison), telling the tale to her son, Scot (Gabriel Bateman). As she tells the story, Morag’s nephew, Carney (Brandon Lessard), jumps in with the version of the events that he knows as Morag’s niece, Iver (Talitha Bateman), listens as well.

The story Morag is telling took place just a few years prior, but it is already a legend. It is a part of Robert the Bruce’s claim to the Scottish throne and prowess as a leader. It is also a far cry from the Robert we see in the present, the one who announces to his men that they should all go home, that the war is lost, that he will not be king of an independent Scotland.

As a film, “Robert the Bruce” never offers the “real” version of what took place in the church between Robert the Bruce and John Comyn. It doesn’t matter. What matters is the perception of the event and how that perception is harnessed; the way that it all fits into the larger narrative of William Wallace and Edward Longshanks and Scotland’s fight for freedom.

We know of the huge losses in Morag’s village as people went off to fight; we know that her husband died fighting as did others in her family, which is why she is now in charge of three children. We know that there are incredibly divided feelings in the village about whether England should control Scotland or whether the Scots should be free. So, when the two pieces of the story meet and a betrayed and injured Robert the Bruce is found and taken in by Morag, we know that trouble is coming.

Although “Robert the Bruce” does a tremendous job of putting these ideas out there, of making it clear what the movie is about, it does not do nearly as well taking the ideas and putting them into a compelling story about what is happening. At minimum, Gray’s movie has pacing problems, with lots of time spent just spinning its wheels and rehashing thoughts.

Beyond that, it is unable to stick to its focal points. This is a film which meanders into little bits of other stories – we see Robert the Bruce’s men following him in order to kill him and get money. We see Morag’s brother-in-law, the sheriff, try to convince her to marry him. We see that Carney is in love with the daughter of the blacksmith to whom he is apprenticed. We go down one culvert after another, never exploring too much, never going too far, and always returning to an injured Robert both needing the protection of this family against the inevitable fight to come, and trying to find his will to lead once more.

There is an air of inevitability about the movie even if one doesn’t know the history. However, too little of what takes place in the middle of the film diverts the audience from their crushing desire to watch that inevitable unfold.

Far and away, it is Morag who is the most compelling character present. She is a strong lead, with a great sense of right and wrong. She is someone who has managed to survive in a harsh place and to do so on her own terms. Hutchison imbues her with both strength and vulnerability and as dull as other portions of the film might be, when the story is focused on Morag and her will, it is great.

Unfortunately, even if she is the lead, Morag is too little the focus of “Robert the Bruce” and the movie fails to draw all the lines as clearly as it might. A movie so worried about the ways of legends and what it means to be responsible for others—either as a king or a parent—it somehow looks too little at the stories it’s telling.

‹ “Like a Boss” and the Business Morons
Movie Review: “The True History of the Kelly Gang” ›