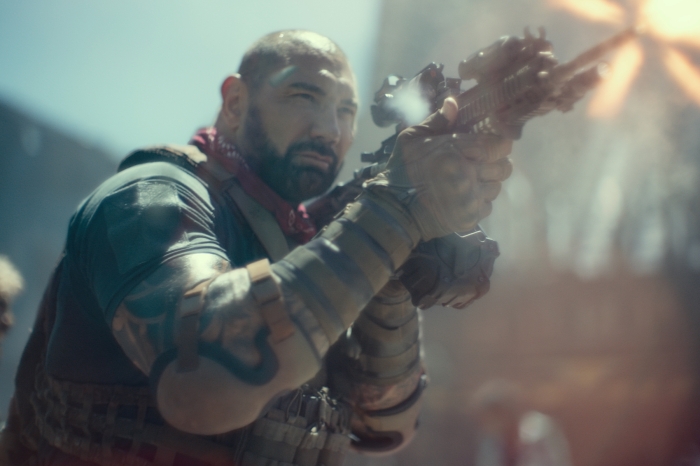 If nothing else, Zack Snyder’s multi-year campaign to get “his version” of “Justice League” released has pushed the auteur theory in concept if not in name. Although filmmaking is a collaborative process, at this moment in time it feels difficult to imagine Snyder working on a film in which he does not have nearly complete control (or, at the very least, states that he has such power). He is a filmmaker who already has produced many of the films he has directed and been involved on a writing level (either on the screenplay or the story or both) as well. With “Army of the Dead,” which is out on Netflix next week and in theaters this week, he has his first (according to IMDb) director of photography credit for a feature too.

All told for the film, Snyder is director, a producer, DP, writer (story is a sole credit and screenplay shared alongside Shay Hatten and Joby Harold), and he operated the B camera. Between those credits and the fact that he stated on a press day that this was indeed his vision, let us accept that this is his movie, this is what he wanted to put on screen and how he wanted to put it there.

It is, in virtually every way, completely meh.

The story finds a team of questionable individuals breaking into the quarantined city of Las Vegas in order to steal money from the vault of a casino. Vegas is quarantined because that’s where the zombies are. The President of the United States is about to nuke the city in order to remove the menace, which puts a clock on our thieves and allows for a massive explosion at the end of the movie that we all know is coming from the start. It is full of lies and backstabbing and silliness. The plot is poorly developed with a number of extraneous pieces that go nowhere and do little but add to the bloated two-and-a-half hour running time (2:28 if you want to be exact).

At the center of the movie is Scott Ward (Dave Bautista). Ward helped save some people in Vegas as the quarantine was set to begin, but has since found himself working as a short order cook. Unhappy with his position (he’d maybe rather have a food truck), Ward happily accepts the offer to lead a team into a casino for the owner, Bly Tanaka (Hiroyuki Sanada). Tanaka has already collected the insurance money for the cash stuck in his vault, but figures he can salvage the cash as well and double his money (minus the cut for the team).

Ward puts together his crew for the operation with the help of his ex-girlfriend, Maria (Ana de la Reguera). The gang consists of a bunch of brutal zombie killers like Vanderohe (Omari Hardwicke) and Guzman (Raúl Castillo); a helicopter pilot, Marianne (Tig Notaro); a safecracker, Dieter (Matthias Schweighöfer); and more. You know, more including but not limited to Scott’s estranged daughter, Kate (Ella Purnell); Tanaka’s security guy, Martin (Garret Dillahunt); and a coyote who has been ferrying people into and out of Vegas for a while, Lily (Nora Arnezeder).

The group is actually largely than that, but Snyder doesn’t have the space in the two and half hours to give each of the above individuals a full storyline or wholly developed characters. Some members of the group have their own side-quests during the thing, like Kate wanting to save a friend who entered the city days earlier and may or may not be alive, but those moments are less well explored than the rest of the poorly conceived plot, even if they are crucially important to getting characters to the end of the movie (or dead long before said moment).

It is, beyond a shadow of a doubt, possible to watch “Army of the Dead,” pull out a dozen or so “cool” moments, and walk away from the film pleased. One can almost imagine folks leaving a theater and nattering away with their friends about how it was so great when zombie “x” died in “y” method. No one would be wrong in such an assessment – Snyder puts together a number of great kills here and, honestly, that winds up feeling like the full reason for the movie’s existence. There is no possible good explanation for Vanderohe bringing a massive, undoubtedly heavy, battery operated circular saw when they’re walking, speed is of the essence, and they’re already weighed down. It’s just cool that he likes to kill zombies with it.

The heist itself is, of course, ridiculous. While there are any number of flaws in the plan, it would be a silly to go through each and every one. The point is for it to seem like fun, and I guess it does. Partially. After all, it is a little silly that the safecracker, who is unquestionably one of the more enjoyable characters in the movie, has to do nothing much besides holding his ear to the door and turning the dials slowly in order to open the most secure safe ever constructed.

Visually, as noted, yes, there are some exceptionally fun zombie kills. Less great is the actual look of the movie. A number of shots of people talking feature an unsteady camera that is more annoying than anything else. Many of the close-ups have lighting and an exceptionally shallow depth of field that offer the sense that the movie is shot in an iPhone’s “Portrait Mode.” The goal may be to offer up these moments as hero shots, but the effect is a distracting one.

And, having already passed 900 words in this review, I can’t help but come back to the notion that writing much more is an exercise in futility. “Army of the Dead” is not a good movie in general, nor a good zombie movie in particular (it is possible to argue that there are different sets of objectives there). It has fun moments, but it fails to exhibit the sort of propulsive energy which it attempts to offer. It is full of standard horror movie illogic to the point where it becomes befuddling. It offers an interesting hierarchy of zombies concept, but doesn’t actually bother to explore it.

In short, this is a movie which feels as though it needs to be refined further, to be shaped more. It has the elements it needs to be great, but there’s too much extraneous stuff in the way. It does, however, have some cool action moments.