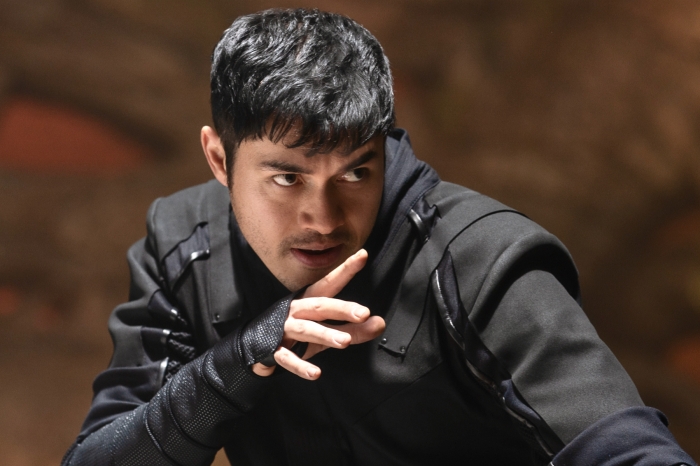 When the end credits for interestingly titled, “Snake Eyes: G.I. Joe Origins” begin, they are markedly different from the rest of the film. Before the full-on scrolling starts, the credits are loud and colorful and a little off the wall and fun. While it is certainly true that the Robert Schwentke directed movie is loud and sometimes colorful and a slightly wild, what it is not—and therefore where the credits truly diverge from the film itself—is fun. No, to be very clear, this not a particularly fun movie. It is a brooding, plodding affair, one which seems both afraid to stray too far from its G.I. Joe roots and terrified of actually embracing them.

Taking on the role previously portrayed in the live-action films by Ray Park, here we find Henry Golding as our hero, Snake Eyes. Whatever Snake’s true name may be is hidden in the mists of time, or at the very least not divulged in the screenplay from Evan Spiliotopoulos and Anna Waterhouse & Joe Shrapnel. Does Snake Eyes not even know his real name? That seems to be the case and with Snake’s father killed before his eyes when he was just a lad, he’s never going to get an answer. Sure, most kids that are old enough to walk and talk and wander through the woods with the father know their own name, but not Snake.(?) Maybe that’s why Snake spends his days and nights trying to find out who killed his old man so that he can get revenge.

The problem with all this isn’t that it’s silly (Snake Eyes takes that moniker from his father having rolled snake eyes on a set of dice to determine his fate), it’s that it takes itself rather seriously. So, poor Golding has to spend much of his time being dark and serious as he infiltrates the Arashikage clan by befriending Tommy (Andrew Koji) and saving Tommy’s life from the evil Kenta (Takehiro Hira) in order to… oh, come on, we could explore the plot and its ins and outs, but that’s really not worth the time it would take.

Here’s the upshot: Snake Eyes has his own motivations (revenge) for doing everything he does and he doesn’t care who he lies to and who dies as long as he gets what he wants. Although that sort of motivation may be very real and very human, it doesn’t play out that way in the movie. There is no introspection, and any shifts in the character feel as though they exist to propel the plot forward rather than vice versa. In point of fact, every shift in every character feels as if it happens to advance the plot onto the next stage rather than the other way around.

We do, it is true, have a better handle on why Tommy is doing what Tommy is doing during the bulk of the film, but that doesn’t really improve the character either. This is an individual the film barely introduces, but whom we are supposed to quickly like and accept and understand, not because we have been given the opportunity to do so, but rather because he’s one of the main folks on screen.

Since this is a G.I. Joe movie—even if it is an origin story—Cobra has to appear eventually, and the evil terrorist organization does do so, not just with their logo (although that does show), but in the form of Baroness (Úrsula Corberó), who is perfectly over the top and self-serving in a way that feels largely different from the rest of the movie and completely right.

As with Corberó’s Baroness, Samara Weaving’s Scarlett is pitch perfect and utterly different from most of the characters on screen. These two have the makings of what could be a great G.I. Joe movie, the movie “Snake Eyes” sort of promises will come down the line as a sequel if “Snake Eyes” is successful.

Schwentke introduces Scarlett in fine fashion with some satisfying bone crunching. Sadly for the movie (and the audience), she then disappears for an extended period. The G.I. Joe operative may be on her way to Japan to help out Snake Eyes, Tommy, and the rest of the Arashikage clan, but must encounter multiple flight delays off-screen for her to take as much time to get there as she does. One could almost forget that she exists she is missing for so long.

With Scarlett absent, the movie spends time with the members of the clan instead. These include Blind Master (Peter Mensah); Hard Master (Iko Uwais); the head of security, Akiko (Haruka Abe); and the head of the clan, Himiko (Eri Ishida), but if Snake Eyes doesn’t ever become a fully three dimensional character, this group is left almost paper thin. It isn’t that Scarlett is completely realized as an individual, she is not in enough of the movie for that, she just comes closest to approaching the fun of those end credits.

By and large fight scenes here feature quick cuts and a jittery camera, often making it difficult to actually grasp the intricacy of the action. This is a shame because there are some very cool moments that get lost in the shuffle, including a fight on a car carrier that feels like it ought to be stupendous and instead comes out slightly above average.

Not saved by the visuals nor the characters nor the story nor the action, “Snake Eyes” is similarly, not helped out by its sound. There is a moment during one action sequence where it is nearly impossible to tell whether we’re hearing the beat of the background music or gun shots. One can guess via earlier visual clues, but that’s not really a great way for a movie to go.