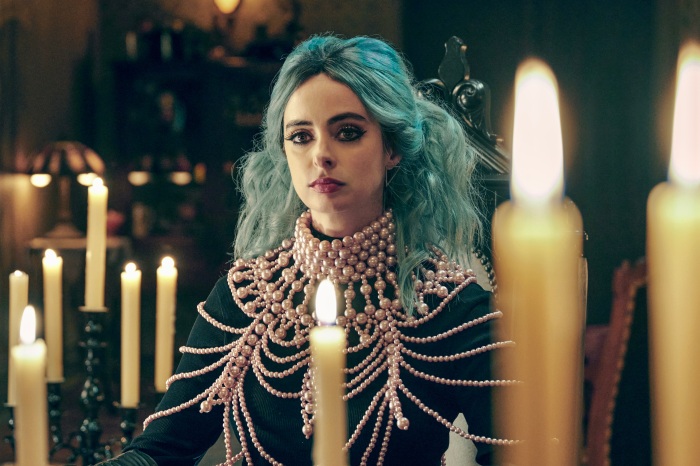 There are kids who look a good scare as much as some adults, and it is for that crowd that the new Netflix film, “Nightbooks,” is clearly intended. Starring Krysten Ritter as an evil witch and Winslow Fegley and Lidya Jewett as her captives, “Nightbooks” continues in the long tradition of youth oriented horror, even if it does so without breaking much new ground.

Directed by David Yarovesky with a screenplay from Mikki Daughtry and Tobias Iaconis, the problem with “Nightbooks” is less that offers up tropes we’ve seen before and much more that it just isn’t terribly interesting. It is a candy-colored horror movie with a great setup, some wonderfully moody moments early on, and then it just sort of feels like it has nowhere to go.

Fegley is Alex, a boy running away from home for reasons we don’t know. At the outset of the film, as his parents discuss him, he heads out of his apartment and to the furnace down in the basement. His goal – to throw away the notebooks in which he writes scary stories, his “nightbooks,” as he calls them. Instead of making it to the basement, the elevator stops a few floors early and he is lulled by the siren song of a TV playing the “The Lost Boys” and enters a stranger’s apartment. Naturally for such a tale, he has been captured by a witch.

All of this is great. Our introduction to Ritter’s witch, too, is great, with her platform boots and blue cotton candy-colored hair. Meeting Jewett’s Yasmin, who is also trapped in the apartment works just as well.

In short, we are given a great introduction to this world. We are instantly intrigued as Alex attempts to climb out the window to the fire escape only to find himself ejected from closet and back onto the floor of the room. A cat with invisibility, Lenore, and a shape-shifting apartment are further enhancements. This is a freaky place where weird things happen and Alex should be scared.

The witch demands new scary stories from Alex every night and everyone (Alex, Yasmin, and the audience) wants to know why she’s doing this and what her end goal might be. Where does the witch go every day while Alex writes his stories and Yasmin is forced to garden (there’s a garden inside the apartment) and cook and clean? Does the witch have Time Lord technology (the place is certainly bigger on the inside)?

It is when the movie actually has to proceed with telling us what’s going on that “Nightbooks” loses its way. The answers all take too long to come and none of them are particularly interesting.

Yasmin and Alex form a friendship and sort of blunder their way through the movie, making conveniently correct guesses, or mistakes which are quickly overcome. The general sense of evil which the movie exudes early on is nearly gone for the middle portion of the film as Alex works out the rules of his new life. The foreboding remains—this is a child who has been kidnapped after all—but the malevolence sort of fades into wonder at the various things the apartment has to offer.

By the time the movie picks up again as the end approaches, one’s interest has largely waned, which is unfortunate. “Nightbooks” is a great movie to look at. Yarovesky has provided a colorful world and as Alex tells his stories, we see them, with an almost “A Monster Calls” sort of flair (in the idea if not the looks of Bayona’s film).

Fegley, Jewett, and Ritter all make their characters as absolutely compelling as possible. We want to understand more about why Alex was destroying his books, Yasmin’s history, and how this distinctly un-witch-like witch has been doing what she’s been doing for so long. That’s much more because the cast keeps us involved in the story than because of anything happening in “Nightbooks.”

Much like Alex and Yasmin’s entrapment in this enchanted apartment, the audience is entrapped in the movie itself. There is constantly a sense that something magical and wondrous is right around the next corner, that we are about to unlock a door that is going to offer us the perfect a-ha moment when everything clicks into place. Yasmin and Alex do indeed get there, the movie itself does not.

Will kids find this more interesting? That is more difficult to determine. My 10-year-old would have bailed in the first few minutes. Nothing after that point would have scared him, but the opening would have sent him running for the hills, and my 15-year-old is definitely above the target age. Of course, all children are different and so your mileage may vary. But, I think it’s a safe bet that adults will get a kick out of some of it, largely the look and feel, and find the rest rather too dull.

‹ “Star Trek” and the Quest to be Better
Movie Review: “Best Sellers” ›