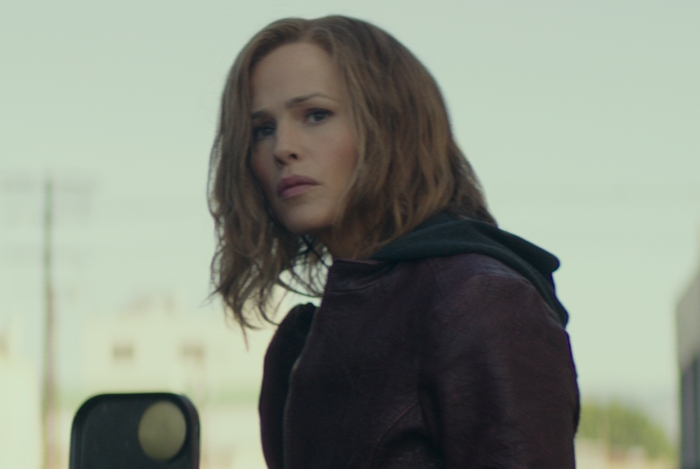 Jennifer Garner’s abilities as an action hero have been known to the public since she first starred on “Alias” more than 15 years ago.  Watching her return to a role that requires that sort of physicality is unquestionably the best part of her new big screen project, “Peppermint.”

Directed by Pierre Morel with a script from Chad St. John, Garner’s ability to sell action may be the only thing the movie has going for it.  In fact, Morel and company use Garner’s ability in that arena as a crutch, never developing characters nor making any sort of sense when they can just resort to Garner kicking ass instead.

The actress stars here as Riley North, a wife, mother, and bank employee who watches her daughter and husband gunned down by a gang of drug dealers.  When three of those gang members go free without even a trial, Riley sets out to get some vigilante justice.

As well worn (and poorly) as that entire setup plays out—and it does play out in such a fashion, particularly with one experienced detective, Moises Beltran (John Ortiz), telling a rookie, Stan Carmichael (John Gallagher, Jr.), all about the corruption in the city—the film only goes downhill from there.  Annie Ilonzeh injects some much needed life as an FBI agent, but even her role feels like one we’ve seen before.

After the court proceedings, Riley disappears for five years before reemerging just in time to wreak havoc on drug lord Diego Garcia (Juan Pablo Raba) and his crew for the anniversary of the shooting.  Where was she during that time?  Seemingly she was pulling a Bruce Wayne – travelling the world, learning to fight both bare-handed and with weapons, and goodness knows what else.  One can almost imagine her being taught by Ra’s al Ghul at some point.

That particular time interval could be an exceptionally interesting one, but the film does not explore it.  It uses the period as a way to explain how the mild-mannered Riley North changed into the action superstar she is when she returns.

“Peppermint” is a movie orchestrated to satisfy the bloodlust of the audience, and to its credit, it knows as much.  Repeatedly we are told that people on social media are rooting for Riley to finish her quest and eliminate evil (whatever form it may take), and many in the audience at the screening I attended were right there with the in-film public.

For or against Riley and her brand of vigilante justice, anyone watching the film will be impressed/shocked by some of the brutality of Riley’s methods.  She pulls no punches and never uses a minimal amount of force when a maximal amount can be applied.  The results are some exceptionally grisly moments.

Truthfully, there is something terribly cynical about this whole affair.  Riley’s actions are justified by stating that she lost her family and has a desire to protect the innocent.  Therefore, according to the rules of the film, she is allowed to do whatever she wants in service of her goal.  There are moments when the film makes it perfectly clear that Riley is unwell, seeing her daughter (Cailey Fleming) everywhere, but not once does the movie desire to take a look at what that might mean for Riley’s character.  She is, instead, painted as a hero and not as someone on the verge of a breakdown or bordering on villainy (or worse).

Riley is unstable and clearly unwell but we shouldn’t care because the bad guys are getting what they deserve?  The robberies she commits are acceptable because she’s going to use her ill-gotten gains to kill villains?

The filmmakers are perfectly happy to have the audience blindly cheer for this avenging angel and make it quite clear that she should be seen in exactly that fashion.  She becomes the “good guy with a gun” who can set right everything that has ever gone wrong.

“Peppermint” asks that we simply go with it, and that’s disappointing because there might actually be a discussion to have about Riley and her actions.  There might be a way to argue that she is in the right, but the film never bothers to make that argument.  It simply doesn’t care.

‹ Movie Review: “Let the Corpses Tan”
“Tucker: The Man and his Dream” vs Reality ›