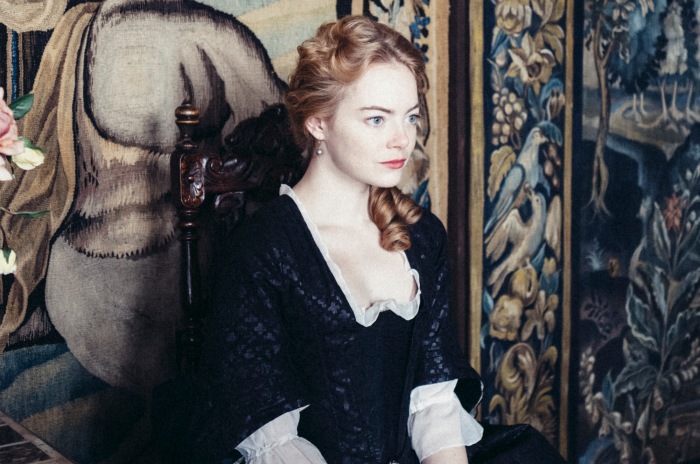 Yorgos Lanthimos’s latest film, “The Favourite” screened this past week as the Opening Night film of the 56th New York Film Festival.  Written by Deborah Davis and Tony McNamara, the movie is a fictionalized take on a portion of the reign of Great Britain’s Queen Anne in the 18th Century. It is funny and charming and a truly wonderful look at love and its limits.

Olivia Colman stars as the Queen, while Rachel Weisz is Lady Sarah, the power behind the throne at the film’s opening.  She is the favourite.

Soon enough, however, a cousin of Sarah’s turns up, Abigail.  Played by Emma Stone, Abigail’s family is down on its luck and she, rather than entering the palace with any sort of distinction becomes a chambermaid. A truly smart individual, Abigail has a plan to rise above that station.

So begins a game of wits between Abigail and Sarah, one Sarah doesn’t even at first know she is playing.  It does not take Sarah very long though to catch on, though, and once she does the fun truly begins.

All three women at the center of the film are outstanding.  The sniping and backstabbing between Sarah and Abigail is carried out with such relish on their parts it is a pleasure to watch. Colman’s Queen Anne, meanwhile, is a petulant, whiny, child, looking for affection in these women who are largely, but not completely, out for themselves.

Truly, this is where some of the most interesting moments in the film appear – when, for both Sarah and Anne, there is a combination of affection for the Queen, a desire for power, and a hatred of the other.  There is cruelty and passion and wit and it is lovely to watch.

Lanthimos’s film is completely droll, featuring quick turns of phrase, a wise look here or there, and small gestures with large meanings.  Although it ought not be described as “laugh a minute,” it will undoubtedly cause lengthy and broad smiles to appear for a good run of the proceedings.

Much like Sarah and Abigail do with the Queen, all three actresses are able to pull us onto their side whenever we are in their orbit.  One moment we may want Sarah to succeed.  Another, we are for Abigail.  And, finally, we just want happiness and comfort for the Queen; for her not to be used by anyone.

Without actresses of the caliber of Stone, Colman, and Weisz, this would not occur. The film exists as a beautiful balance between the three characters and that is a testament to wonderful work of those who portray them.  The supporting cast is also quite good, featuring the likes of Nicholas Hoult, Mark Gatiss, and Joe Alwyn.

To be sure, the concerns of the film go beyond just the relationship triangle at its center and to the world at large.  Or, rather, stem out from this triangle into the world.

As we see, Great Britain is at war with France and a small number of people have influence on British policy.  Some believe that Great Britain should press the issue and beat France back further following a large victory, while others would look for peace.  As the relationship dynamic between the women change, so too does Great Britain’s look at how to pursue the war.  This is due to Queen Anne’s wavering as a result of the two other women and their waxing and waning influence.

It is a scary thought and one that undoubtedly is echoed in our world today where, although we may elect leaders, we are subject to their moods, be they good or bad.  What might happen if someone feels momentarily betrayed by a confidante who has pushed to avoid a fight with another nation?  Might a leader strike out?  It is possible.

“The Favourite” is not, as is hopefully evident, simply a lark.  It is funny, but it brings up serious matters of politics and war and love; not simply romantic love, but familial as well.  As examples, the Queen is struggling with the loss of many children earlier in life, something which has affected her deeply, while Abigail has to deal with her loss of station though her father’s actions.

Throughout the movie, whether in a funny moment or a serious one, Lanthimos offers up gorgeous costumes, wonderful sets, and an extreme sense of loneliness.  This may be a palace that is full of people at all levels of society, but it is a place of loneliness for all three women.

One hopes that with “The Favourite,” Lanthimos will find an ever wider audience for his work. It may be the most accessible movie he has made, but it is no less wonderful for that.  All three actresses are fantastic and deserve accolades for their work here.