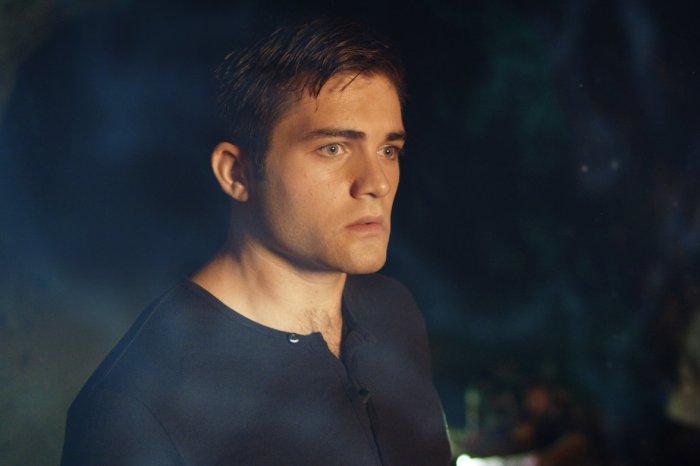 What if the Fountain of Youth was less a fountain with some water that makes one young and more a cave where time just went super slow?  Such is the concept of Mark Dennis & Ben Foster’s “Time Trap.”

That idea at the core of this movie, which the two men directed and Dennis wrote, is a completely fascinating one.  It is also a movie that works far better as a concept than a reality.

The setup by which we learn about this cave is nice and straightforward.  This isn’t a movie that messes around with a lot of extraneous material.   So, near the opening of “Time Trap,” a professor, Hopper (Andrew Wilson), enters the cave, knowing there is something odd about it.  When he doesn’t return after a day, two of his T.A.s, Jackie (Brianne Howey) and Taylor (Reiley McClendon), decide to follow in his footsteps.  They enlist the help of Cara (Cassidy Gifford), because she has a crush on Taylor and a 4×4, and wind up with Cara’s sister, Veeves (Olivia Draguicevich), and her friend, Furby (Max Wright).

While the setup is simple, on the whole, the group is annoying.  Furby is offensive in his repeatedly hitting on Jackie (presumably this is may to be a joke, but it doesn’t play very well in 2018), and the constant whining and infighting amongst the group becomes old fast.  Veeves plays little to no role whatsoever, and Jackie and Cara are virtually interchangeable, save that one of them gets injured.

The biggest thing that “Time Trap” has going for it, save the idea, is that the audience is usually a couple of steps ahead of the characters.  We get to watch them work out what we already know, or what we can surmise based upon knowledge we have and they don’t.  Seeing them put together the pieces works well, especially as we start to ask more and more questions about what is happening and why and the characters soon have the very same ones.

From its runtime of less than 90 minutes to its visuals and effects, “Time Trap” has the feel of a made-for-cable movie, something I in no way mean as negative (this being a golden age for television).  It is simply a feel which describes the work.

As the movie progresses and reaches its climax, it gets super-weird, and that works for it as well. Seeing the changes in the outside world and how they start to effect the inside is truly enjoyable.

“Time Trap” very much feels like two entirely different things mashed together.  It is a great, high concept, notion and has some wonderful steps on the way.  So many of the details, however, are bland.  Six months after watching it, you’ll probably only be able to describe it as “that weird one in the cave.”  But, there are worse fates.

“Time Trap” is in theaters this November.