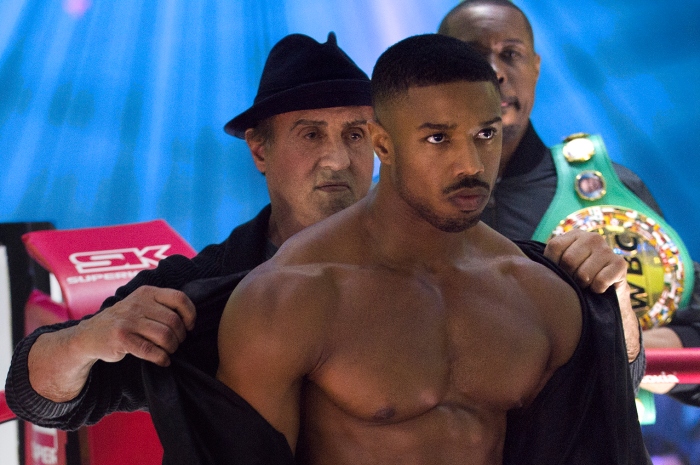 There is a basic formula for “Rocky” movies and the “Creed” films are very much “Rocky” movies even if they focus on Apollo Creed’s son, Adonis (Michael B. Jordan), with Rocky’s story taking a backseat.  Due to this formula, the audience knows that if the boxer is in a fight well prior to the film’s climax, things aren’t going to go very well for him.  Heck, even losing the final fight is possible, but the early one is definitely going to go badly.

It therefore speaks well of “Creed II” and director Steven Caple, Jr., and Jordan himself that this particular early-ish fight stills manages to be exciting.  As he so often does, Jordan fully inhabits his role, able to make believable turns from ultra-confident boxer to unsure family man with aplomb.  Caple and the film allow this all to happen, without limiting Jordan’s magnetism.

The turn from boxer to family man, too, is part of the “Rocky” formula.  Sylvester Stallone, who once again reprises his role as “the Italian Stallion,” Rocky Balboa, makes these same turns in the six movies in the franchise with the word “Rocky” in the title. The fights in those movies are great, but it is Rocky’s down to earth relationship with Adrian, Apollo, Paulie, and everyone else that make the movies succeed.

Another part of the formula is the fight for the pride/redemption of one’s self, one’s family, or one’s nation.  They are movies about answering the call of history and, when the time comes, standing up and giving it one’s all.

One of the best examples of this is “Rocky IV,” where Rocky has to fight the huge Russian, Ivan Drago (Dolph Lundgren), after Drago kills Apollo Creed in the ring.  It is a fight for Rocky’s friend and Rocky’s country.  Not the weightiest of the series, “Rocky IV” is still one of the best for its pure distillation of the formula.

“Creed II” very much plays off of that film, with Drago’s son, Viktor (Florian “Big Nasty” Munteanu) getting bullied by his father into a trip to the U.S. to take on the Adonis Creed.  It brings back bad memories for Rocky as well as Apollo’s widow, Mary Anne (Phylicia Rashad). It also gives Adonis a personal stake in the fight.  Then, there is a return to Russia for Rocky and Adonis struggling with his burgeoning family and what his duties are to Bianca (Tessa Thompson) and anyone else.

Just as with “Rocky IV,” this is not the weightiest of movies.  It is certainly not as deep and compelling as the first “Creed,” but it is still a powerful movie.  And, it is one that doesn’t simply rest on Jordan (although it might be nearly as successful if it did).

Rocky is a mythic figure in film, and the character is one inside of the franchise’s sporting world. Seeing him relive moments from more than 30 years ago (“Rocky IV” came out in 1985) brings back memories for both the characters and for those in the audience who remember the first two Drago fights.  Watching Stallone as Rocky face that is surprisingly powerful.  The films in the series have had ups and downs, just as the character, but this older version of him we have gotten in the last two movies might be the most compelling one.  This is a guy still trying to make sense of his life long after the spotlight has left him and Stallone is outstanding as the lovable lug.

It is also interesting to note the differences in Viktor Drago’s pared-down training style as opposed to that of his father.  So much was made in “Rocky IV” of the science behind Ivan’s training that watching Ivan train Viktor in such a different way, especially knowing everything Ivan lost following the fight with Rocky, is another wonderful aspect of the film. One wishes there were more of it here.

The “Rocky” franchise is now at eight entries with “Creed II,” and seeing similar storylines play out decades later is a reminder of just how good some of those early films are.  Underdog sports stories may be a dime a dozen, but this series has turned them into something bigger and better.  It knows just how and when the underdog goes to being the top dog, and when they wind up getting put in their place.  Plus, the best of the movies doe it without ever losing sight of the human aspect of the stories.  Whether the boxer is an up-and-comer or WBC champion, they still have a life outside the ring, and the one here in “Creed II” works.  No, it isn’t as good as good as the first “Creed,” but it will still make you stand up and cheer.

This reviewer nearly stood up and cheered at points before the conclusion of the climactic bout. Not a lot of movies can make that happen.

‹ Movie Review: “Fantastic Beasts: The Crimes of Grindelwald”
“To Kid or not to Kid” That is Maxine Trump’s Question ›