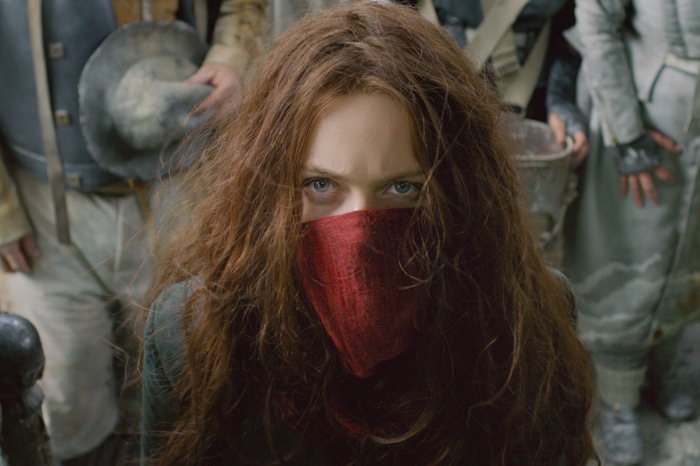 There is something incredibly impressive about the visuals that have been put on the screen for “Mortal Engines.”  Directed by Christian Rivers, the film has the grand sense of scale one expects from the work of Peter Jackson, who is not only a producer on the film but also wrote the screenplay with Fran Walsh & Philippa Boyens (it is based on a book by Philip Reeve).

While the scope is epic and the computer graphics are impressive, the film lacks the other components that make movies good – compelling characters, an interesting story, an engrossing way of telling that story, etc. What Rivers has made is a movie devoid of all the things that keep the viewer entranced for longer than the trailer takes to play out.

Front and center in the movie is Hera Hilmar as Hester Shaw – an orphan who has come to the “traction city” of London to kill the man who murdered her mother so many years ago, Thaddeus Valentine (Hugo Weaving).  This being a post-apocalyptic world, sizable cities now exist on massive vehicles, moving about and devouring (yes, literally ingesting) smaller cities in order to maintain the energy required to move.

Hester’s attempt takes place within the first 10 or 15 minutes of the film, so it will surprise no one that she fails.  Finding herself back off of London, where she had just arrived, she now has a companion to boot, Tom Natsworthy (Robert Sheehan).  More people come in and out of the story of Hester’s attempts to kill Valentine, Valentine’s attempt to gain power in London, and some ill-defined would-be war between traction cities and a stationary haven that exists behind a massive wall.  None of it after Hester’s first attempt is particularly engrossing.

Watching the movie play out, one can easily spot similarities with “Game of Thrones,” largely with the notion of this wall, and some of the original Star Wars trilogy.  Those other tales, however, do everything better.

For example, there is no sense of what the current world actually looks like in “Mortal Engines,” and that is certainly a crucial bit of missing information.  People talk about the land areas as though they are absolutely essential, and we know that resources are important, but the film lacks any sort of specificity which, in turn, destroys the world building effort.

While Hester’s motivations are clear, Tom is not so well drawn.  Poor Tom has to deal with an incredible amount of upheaval in his life.  This is a young man whose beliefs are seemingly shattered early in the goings on, particularly when realizes that Thaddeus Valentine is evil. Inexplicably though, there is absolutely no period of adjustment.  He simply goes from having one world view to one that is 180 degrees different and just continues (would that we humans could do as much).

As for Hester, who is supposed to be the center of the movie, she really seems to have very little agency. She is routinely acted upon by outside forces who either help her succeed or fail depending on when in the movie the moment takes place.

Far too much of the film, in fact, relies upon absolutely random luck.  The good guys should unquestionably lose, and they would except for a ridiculous coincidence or two.

Then again, Valentine goes through much of the movie insisting that the “traction city” way of life is dead because there simply aren’t enough raw materials left to keep them going, but his big plan to change the world in no way actually changes the world.  It is vaguely absurd.

This last issues feels more of a shortcoming in the movie than a bit of blindness on Valentine’s part. The same is true for the city of London being wholly unable to identify Valentine as a bad guy.  Weaving plays the character as a one-note, entirely malevolent, character; someone who just oozes evil.  How every single person in London doesn’t see that is perplexing.

For this type of film, the audience is also pre-conditioned to expect Hester and Tom to end up together. Everyone has seen this story play out before and knows that’s where they end up.  Consequently, they do end up there, but the do without even the slightest of emotional connections. There is no chemistry between the two, they just happen to both be main characters in the story, making it a requirement which even they feel.

Rather than fleshing out any of the main characters, “Mortal Engines” instead opts to give us a completely flat secondary set of characters.  These, in turn, momentarily provide the illusion that the three folks mentioned above are well-rounded.  It is a sleight of hand that is quickly dispelled.

Even the visual nature of the film is a letdown.  It is true that London is an impressive digital creation, but Rivers’ camera is all over the place and the editing is a mess.  Moments of shaky cam hurt ones ability to see what is taking place, and then quick cutting and close-ups destroy what remains during more intense moments.

As if that wasn’t enough, music is layered on top of background noise and other sound effects in what can best be described as a cacophonous, dyspeptic, mélange.  This is to say that “Mortal Engines” is loud and over-the-top, and mixed in unsettling ways.  The issues serves only to exacerbate all the film’s shortcomings, furthering the opinion that someone, somewhere, decided to just throw more at the movie in order to make it work – more music, more sound, more shaky cam, more cutting, more characters, more twists, more effects.   More, more, more.

The result of all this is that “Mortal Engines” may be the perfect example of a big-budget, utterly empty, Hollywood blockbuster.  It is what moviemaking should not be.

‹ Is “The Muppet Christmas Carol” the Best Adaptation of the Novel?
Movie Review: “Bumblebee” ›