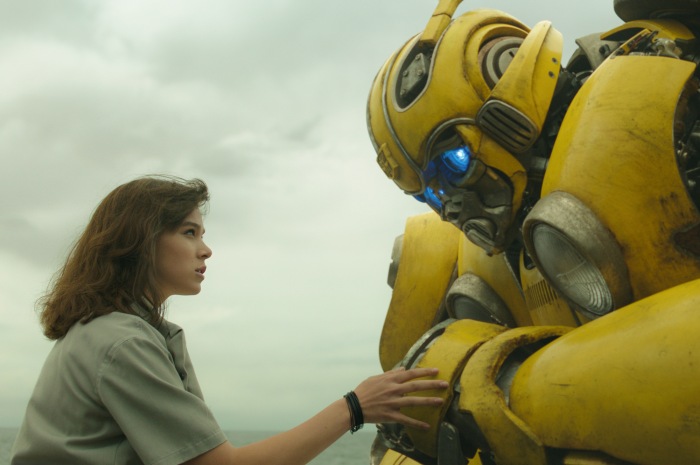 Wonder no more.  With the sixth big screen live-action adventure, the franchise has finally gotten it right.  “Bumblebee” is exactly what a “Transformers” movie should be.

Taking the directorial reins from Michael Bay is Travis Knight, and rather than continuing following the events of the most recent film, “Transformers:  The Last Knight,” this tale goes back to 1987 and the arrival of Bumblebee on planet Earth.  The Autobot’s mission is simple – scope the place out, protect it, and maintain a low profile until the rest of the Autobots arrive so they can all regroup and attempt to retake Cybertron.

This all takes place early on, and it is when things go awry, and Bumblebee loses both his voice and memory, that the movie really gets going.  He winds up in the hands of Charlie (Hailee Steinfeld) and the two have a wonderfully ’80s adventure which, yes, features Decepticons (Dropkick and Shatter).  There are also army guys trying to figure out who is bad and who is good and young love and loss and so much else.

As much as the 1980s setting works for the film, it is also the single biggest stumbling block, “Bumblebee” just steers too heavily into it.  The movie features reference after reference after reference to the point where, at times, it seems to be trying too hard to prove the time period.  It is a sledgehammer,  and while the movie takes a bunch of great ’80s cues there’s a moment when even ’80s kids might decide that Charlie is more ’80s than they ever were.

Even so, the script from Christina Hodson wisely centers itself on a “typical” teenage girl. That last deserves the quotes around typical because Charlie’s problems are indeed outsized at the start.  She may have a nice suburban house and a moped, but she has, crucially to who she is as a character, lost her father.  Her mother, played by Pamela Adlon, has remarried, but Charlie still feels the loss acutely and it is made her even more of a loner, an outsider.  It is one of the reasons she can embrace Bumblebee for who he is – these are two outsiders who joined together in friendship.  Toss in love interest and third outsider, Memo (Jorge Lendeborg Jr.), and all of the sudden you have your ’80s movie group of outsiders ready to take on the world, which is exactly what they do with the army, led by Agent Burns (John Cena) coming for them.

Although the outcast companions angle might generally work, it does fail once or twice.  This is most noticeable when Charlie is dealing with the “cool kids” at her school.  The storyline simply isn’t as fleshed out as it might be.  But, the sin is minor and (or because0 the moments easily forgettable.

Where “Bumblebee” truly shines is in the relationship between the Autobot and Charlie. It is an amazingly real, well considered, camaraderie.  So much of the credit here is due to Steinfeld, who excels.  Her character’s growing love of Bumblebee is beautifully played.

Bumblebee, as a CG creation, also manages to inspire emotion.  Whether the feelings are there in his face or simply projected onto it by the audience, it works, and we all know what the robot is feeling.

When the climactic battle does come, Charlie and Bumblebee make a great team, and Knight’s direction of the sequence largely avoids the ultra-close-up quick cutting to which we are regularly treated.  One can see the fight unfolding and understand how it all comes together. The battle is more impressive for it, as is the opening fight on Cybertron (which may be handled better).

The stakes may be (slightly) lower in this film, but with luck, “Bumblebee” will show the franchise a way forward with any future stories.  The key for the film’s success lies not within the time period or the exact nature of the threat, but rather within the complex relationship established between the characters, whether they be humans or robots in disguise.  This is the “Transformers” movie for which we have all been waiting.