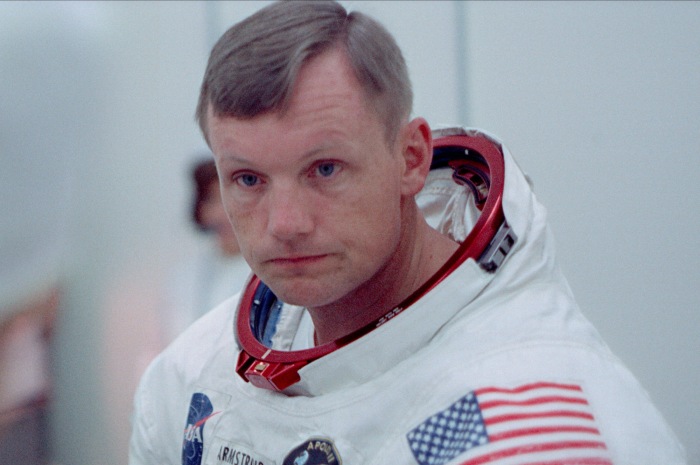 However it may play on the small screen, or even smaller big screens, in IMAX, “Apollo 11” is a powerful piece of filmmaking.  The documentary, as its name implies, focuses on the Apollo 11 trip to the moon in July of 1969, and it is an astounding work.

Rather than offering up a plethora of on camera interviews where people discuss their memories of what took place, director Todd Douglas Miller gives us a fly-on-the-wall view of the mission as it unfolds.  To do this, the documentary utilizes footage which (the press materials state) include portions of newly discovered 65mm footage and 11,000 hours of audio recordings.

Consequently, that “fly-on-the-wall” is less on the literal wall then buzzing all over the Florida coast, the NASA control center in Texas, inside Apollo 11, inside the lander, on the moon, and just about anywhere else you could want it to be. This back-and-forth unfolding offers what feels like a complete picture of the mission to the audience, but it is a picture meant to be received emotionally more than it is meant to be analyzed.

What one should not do though is go into “Apollo 11” looking for any great, new, insight about the mission and what took place during it.  We may get new angles and new audio, but there is nothing mentally deeper than what is shown and heard.  One will not leave the theater having gained knowledge about the three NASA astronauts who took the voyage, or those back at base who supported it.  Anyone who has seen any of the number of films about the moon missions will recognize names and possibly faces, but there is no look at the psyche of Armstrong as there was in last year’s “First Man.”

This is a directorial choice, and Miller manages to provide it without ever offering the sense that “Apollo 11” is in any way a puff piece.  It is nostalgic, to be sure, but it is not light and airy.

In fact, the above should not be read as a negative criticism in any way.  It is a conscious approach, and a valid one.  There is no doubt that Miller has brilliantly accomplished that which he set out to do. One only need watch the Apollo 11 liftoff to see as much.  In IMAX, the whole theater rumbles once the countdown clock hits zero.  The Saturn V feels like a living, breathing, thing.  At one point, this reviewer almost swore that he smelled the fuel burning. The audience is right there as it is all taking place, and “there” is, in fact, multiple locations.  It is a god’s-eye view.

Using this approach allows Miller to get the audience on the edge of their seat even though everyone watching the film knows the outcome of the mission that Neil Armstrong, Buzz Aldrin, and Michael Collins are on.  The tension in the various locales depicted is more than just palpable — it wafts off into the audience, just as the smell of the fuel does.  Watching the lander come down safely is a nail-biting affair, as is the capsule coming out of a blackout and splashing back down on Earth at the end of the mission. It simply does not matter that we know the successful nature of the venture, Miller has put together the footage in such a way that emotionally resonates.

What one really wants with “Apollo 11” is a companion film, specifically, a making of documentary about this documentary.  What bits of footage and audio are new?  How were they assembled and edited with footage that was already known? What did Miller learn about the process. There are far more questions along those lines than with what takes place in the piece itself.

Even so, “Apollo 11” begs to be not watched, but experienced.  By not offering interviews or voiceover or tons of explanations, it requires the viewer to pull in closer to what it is providing, and that is nothing less than one of the most impressive technological feats of the 20th Century, one which was years in the making and required the dedication of an incredible number of individuals.  It is certainly an inspiring work and should be witnessed (again).