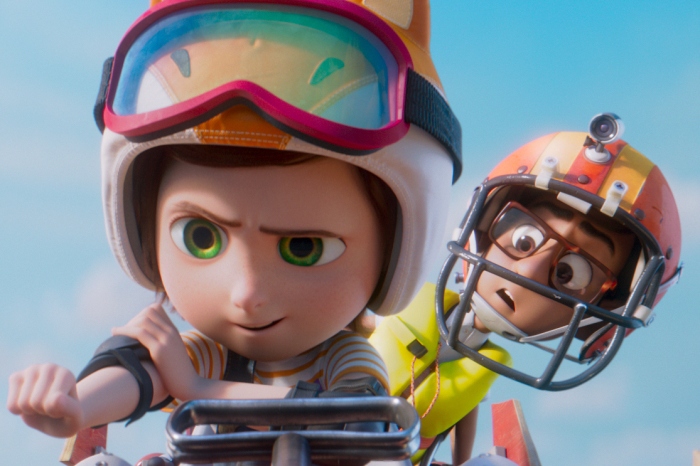 The best theme parks are truly magical places.  They are these locales of wonder and excitement where anything and everything can happen.  They are scary and fun and enchanting and eye-opening.  They are places to wander by yourself and to visit with your family and friends, doing and seeing things that you’ll remember forever.

Yes, this critic may be a fan of theme parks, but the reasons for that are, as you can see, abundant. This critic has also never watched a movie capture the above sentiments as well as the new film, “Wonder Park.”  With a screenplay by Josh Appelbaum & André Nemec, and a story by Robert Gordon and Appelbaum & Nemec, this animated marvel brings an imaginary theme park to life, imbuing it with visual representations of all the emotional trappings of a such a place.  And yet, that’s not even the main thrust of the movie.  No, “Wonder Park” isn’t just a love letter to theme parks, it marries that to a touching story of one girl, June (Brianna Denski), coming to terms with her mother’s illness.

June and her mom (Jennifer Garner), have been building a theme park, Wonderland, together for years in June’s bedroom and around their house.  They create the rides and the characters and, brilliantly, how one of the characters, Peanut (Norbert Leo Butz), creates the rides.  It is a game the two play not only with their imagination, but with models and drawings and dolls, and the idea of it all grows so big other kids in the neighborhood want in.

It is the magic of a theme park on a small scale and it is perfect.  It is perfect for the audience watching the movie and for the characters within it.

Sadly for June, when her mom becomes sick with an unspecified illness (although one suspects cancer), and has to go away for treatment, Wonderland becomes something the girl would rather forget.  She packs away the models and the drawings and the characters.  She burns the blueprint.

This is the movie telling us about June not being able to deal with her mother’s illness, of her not wanting to focus on it.  And, when June runs off from a bus taking her to summer camp, she finds herself in Wonderland itself, with June’s actions of destroying the park at home also having destroyed the “real” park.

“Wonder Park” doesn’t bash one over the head with the idea that June has to confront her feelings about her mother’s illness in order to confront the troubles facing the park, nor does it shy away from them.  Younger audience members won’t draw a line between the two, but their parents will.  This is one of those movies which different ages will receive in somewhat different fashion, with different understandings of what is taking place and why and what it all means.
What everyone will get however, is the absolute, incredible magic of “Wonder Park” and Wonderland. The characters within the park (voiced by Ken Hudson Campbell, Kenan Thompson, Mila Kunis, John Oliver, and Ken Jeong) are these exceptional ideas of what theme park mascots might be.  The rides June makes up are feats of imagination that one would love to actually ride on and which, in some cases, things might actually be possible to create.

The animation may not be anything quite as detailed as what Pixar puts forth, but there is just as much emotion here as any animated feature can offer – and quite a lot more than many a live action movie.  It uses its color palette to the fullest.  In fact, it uses its characters in the same fashion.  Everyone, from the Wonderland creations to June’s friend, Banky (Oev Michael Urbas), and her dad (Matthew Broderick), is there, serving a purpose within the story but also seemingly a true individual with their own thoughts and feelings and ideas.

As with any good theme park, “Wonder Park” has some scary moments and some thrilling ones, but it is so much more than just “good.”  It is simply astounding how well the preternatural tale of the park is woven into the heartbreaking one about June’s mother and June needing to face that.  It is just as magical as the place June, her mother, and Peanut create.

‹ Movie Review: “Yardie”
“Mary Poppins Returns” and we Love it ›