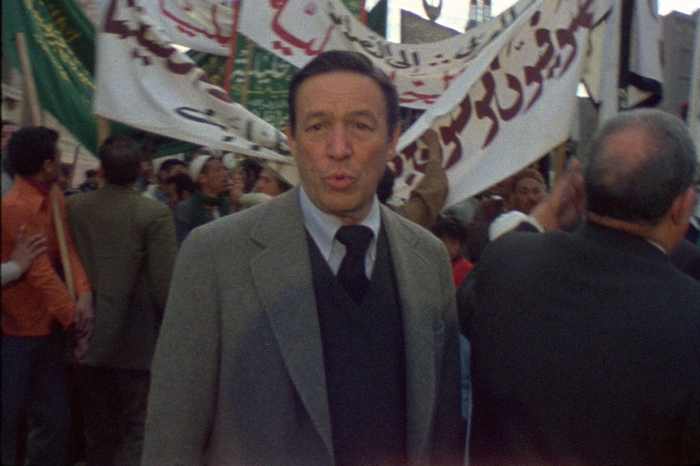 There is no doubt that director Avi Belkin’s new documentary, “Mike Wallace is Here,” wishes to squarely place itself within the present day journalistic conversation, the conversation which includes the President of the United States and his White House abusing the press corps.  In fact, the official description of the movie mentions the President right up front, and the film opens with Bill O’Reilly telling Wallace that he, Wallace, is directly responsible for O’Reilly’s brash, boisterous, style; that O’Reilly is a journalistic descendant of Wallace.

To start with the end, this critic isn’t sure that the film succeeds in its goal.  “Mike Wallace is Here” is insanely compelling from first to last, and its subject’s career is well, but not fully, explored. It also makes a good case for Wallace being used as an example which later journalists followed.  However, the through line is much more about Wallace’s decades of unflinching interviews than relating those to the present day situation.

This leads to a crucial question, and one this review cannot proceed without answering – can a film be “good” if it does not succeed in its goal.  Does a documentary have to prove that its argument is true in order to be a winning documentary?

“Mike Wallace is Here” proves that it does not.  Belkin’s film, marvelously, is largely constructed through interviews, none new, and footage of Wallace at work (either on camera for the television audience or behind the scenes moments).  It all rather miraculously paints this view of a hard-hitting reporter who was never afraid to shy away from asking tough questions even if he was terrified of answering the same.

Due to the film’s structure, we don’t get much beyond the barest thumbnail sketch of Wallace’s personal life.  It is enough however to allow the viewer to push the personal from the mind and focus instead on the persona Wallace put forth.  Yes, the film seems relatively comfortable with the idea that it was indeed a persona.

This then makes the film all the more confusing and compelling – it is, in the simplest of explanations, a greatest hits view of one of the most fascinating journalists of the 20th Century.  It is a look at the celebrities and politicians and various other people from every walk of life that he interviewed and stories that he broke. Although the documentary only gives us a fraction of the full breadth of Wallace’s work, it is an astounding set of examples.

It is also almost too much. The movie cannot possibly spend enough time on any individual moment, any individual person (save Wallace) to offer something that feels like a full view of any of the stories.  The closest it gets is in its look at the court case General Westmoreland brought against CBS for Wallace’s coverage of the General on “60 Minutes,” but even there it is clear that the tale goes further, as does the story surrounding the interview with tobacco industry whistleblower Jeffrey Wigand, which the film also explores.

In terms of visuals, Belkin repeatedly offers the view of two camera shots side-by-side.  Many of these are, quite clearly, footage taken at the same time during an interview, so one can see a close-up on both Wallace and his subject.  However, there are moments when the two camera shots are out of sync with one other (from  different interviews or different moments in an interview) and in at least one case, where  a camera shot has been reversed.  These changes are purposeful, particularly a mirror image shot which makes it appear as though Wallace is examining another Wallace moment, but add a flair to the documentary, just as do the correctly synched side-by-side moments.  It explores some of the artifice of what it takes to do an interview, removing the interview editor’s ability to choose whether to offer up a reaction shot or not and gives us moments where Wallace was camera, but perhaps felt would never be aired.

Successful or not in terms of its espoused goal, “Mike Wallace is Here” is an incredible look at the man with the microphone.  A swift 93 minute film, it would be watchable at double the length.