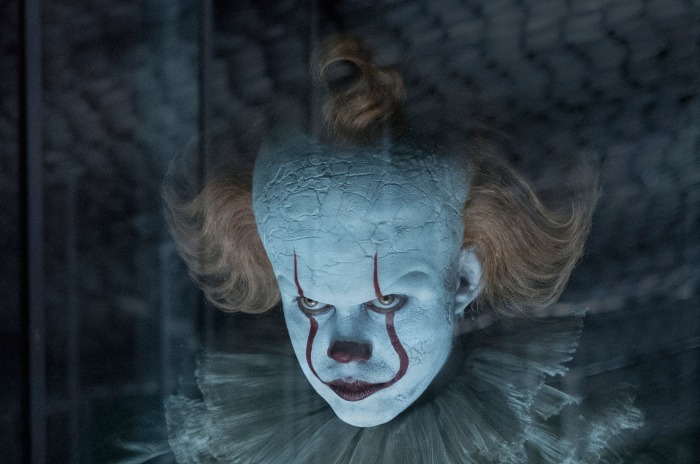 There is a recurring joke in “It:  Chapter Two” that James McAvoy’s Bill Denbrough, an author, doesn’t know how to write a good ending.  Rather than simply feeling as though it is a trait of Bill’s work, it comes across as the film’s own fear that however this story of Pennywise and the Losers’ Club ends, it will be with a whimper and not a bang.  Those fears are not wholly misplaced, but the bigger problem is that Bill writes great stories with bad endings, director Andy Muschietti has given us a mediocre story with a middling ending.

With a screenplay by Gary Dauberman, this completion of the adaptation of Stephen King’s novel feels more like a weakened shadow of the first film rather than a movie in its own right.  Not only are we treated to adult versions of the Losers—McAvoy as Bill, Jessica Chastain as Beverly Marsh, Bill Hader as Richie Tozier, Isaiah Mustafa as Mike Hanlon, James Ransone as Eddie Kaspbrak, and Andy Bean as Stanley Uris—returning to Derry to face Pennywise (Bill Skarsgård), but that tale is intertwined with more moments of the young Losers and their battle.  Of course, we already saw the young Losers defeat (if only temporarily) the evil clown and these new moments feel shoehorned in.

Some of the scenes with the younger group do not make sense temporally—like Ben being tortured by Pennywise while in school even though the first movie takes place over the summer—but the larger problem is that they take away from the adults’ tale.  They diminish the present in favor of the past. The actors playing the adult Losers have so much to give, and when offered the opportunity, they shine, but Muschietti’s constant need to revisit the first film strangles them.  Instead of a true story of the adults, we have a half-story mixed in with what feels like “never before seen, extended cut” footage of the young Losers.

Along the same lines, while Skarsgård’s take on Pennywise himself still feels wonderfully creepy, he too is given short shrift in this sequel.  Staying true to the source material, the evil that is Pennywise appears in different forms before the Losers, but none of those versions can hold a candle to Skarsgård’s take on the clown.

In the simplest terms, this is a 170 minute movie which doesn’t have the time to tell the story it’s trying to tell.  It is not that it is bloated with irrelevant pieces, but rather that while the first film was happy to excise large elements of the novel to tell a clean, coherent story, the second is less willing to do so and by trying to cram in too much, it provides far less.

When the final battle with Pennywise does arrive, it largely works, but there is a sense there too that something is wrong about it.  During a pivotal moment in the fight, the Losers somehow come across as bullies. Facing an ancient incredibly powerful evil, they are anything but that and yet the building of that sequence casts them in such a light.  It goes too far.

Everything about “It: Chapter Two” is over the top. Rather than feeling of a piece with the first film, this entry is more of a response to the success of the original, working hard to double down on what audiences enjoyed last time with the assumption that more will be better.  It is not.

I have in the above been very quick to point out some of the things that don’t work about the movie, but here’s the thing – it’s still quite good.  It undeniably has its failings and is inferior to the first movie, but it largely works nonetheless.  There are beautiful transitions between the young Losers and the older set, and there are some wonderful echoes of that first movie as well.

The atmosphere, too, even in daylight, provides truly creepy moments and while there are a number of jump scares in the film, they are not the be all and end all of the scares. Bill and Beverly, most notably, have to face the horrors of their childhood that they had successfully left behind before returning to Derry.   If only they could have been fully explored.

“It:  Chapter Two” is a good movie.  It features great performances, but they get buried; it features some horrifying effects, but they go too far; its scope is suitably grand, but it lack depth.  The film is largely like Pennywise himself – insanely powerful, but far too willing to believe in that power to make good use of it.