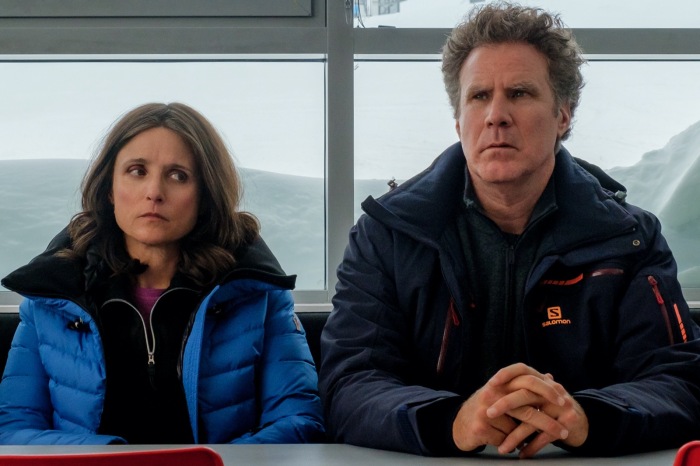 Inspired by the Swedish film, “Force Majeure,” Nat Faxon and Jim Rash’s “Downhill” is a comedy. Nominally speaking it’s a comedy anyway. In many cases I employ the “in a tragedy everyone dies and not everyone dies in this movie therefore it’s a comedy” definition and that definitely fits the bill here.

You see, while there are plenty of jokes in “Downhill,” to suggest that it’s a comedy, even a black comedy, means that there’s something terribly funny in this story of one couple’s marriage—and family—falling apart. And there isn’t. There just isn’t.

The couple in question here, Billie (Julia Louis-Dreyfus) and Pete (Will Ferrell), have traveled to Europe with their two boys, Finn (Julian Grey) and Emerson (Ammon Jacob Ford) for a ski vacation. The fact that they have booked themselves into a resort only frequented by adults when there’s a family friendly place 20 minutes away speaks to the parents’ general disinterest in their kids, but they are both quite vocal in their love of said children. This is important because things start to go downhill when a controlled avalanche takes place as they’re eating lunch outside at a restaurant and get a whole lot of snow on them. Pete, as the snow is about to hit, grabs his phone and runs. Billie, on the other side of the table between the two kids, grabs the kids and ducks, afraid they’re all going to die.

As a starting point for a film about this relationship and priorities, it’s a truly great beginning. The problem with “Downhill,” is that it offers up a series of events following the incident but gives too few introspective moments, too little insight into what is really happening.

Why have they booked themselves into this resort and not another? Not discussed. Why would three of them sit on one side of the table and only one on the other; obviously there’s an issue to begin with, but what? Pete is attached to his phone, but do his kids really hate him because of that? There’s an implication that they might. Has Billie poisoned the kids towards him? We do know that Billie weaponizes the children after the incident, but we know nothing of what came before, just that the film thinks it’s funny that Pete is still having trouble after the death of his father eight months earlier. How is that a joke? Why would his grieving be played for laughs? That is truly unknown.

What “Downhill” does offer up is a picture of a family where the parents clearly have stresses and don’t always see eye to eye. So much of what is shown in the film seems like relatively standard family dynamics stuff. As an example, Pete books a day for them to all go helicopter skiing and yet they oversleep, get stressed, and there’s a brief fight (and not a big one) before they can get onboard the helicopter. While maybe more expensive than most family outings, such a moment feels like an utterly typical day in a family outing designed to create memories that last forever. Crucially, during such moments the movie appears to feel as though it is really tackling one couple’s deep-seated issues when instead it is just offering up a typical day in the life (go to DisneyWorld, a place where memories are created to last forever, you’ll see crying and disagreements).

What we do see here is a man who undoubtedly was in the wrong and definitely needs to apologize and figure out what caused this abominable instinct to abandon his family in a time of need. We also see a woman who feels like having an affair might be an acceptable thing to do in response to her husband’s action. These are both, without question, important elements to tackle.

When, blissfully, the end of “Downhill” does arrive—and the movie is a very long 86 minutes—it has chosen to address some concerns, wholly ignore others, and have the audience question what they watched. There is an alternate film that could be made with a similar script that actually delves into everything this couple is going through. Perhaps this is considered a comedy because it never gets far past the surface, but that’s a poor definition of comedy and a terrible tack to take.

There are moments that are indeed truly funny, and co-stars Zach Woods, Miranda Otto, and Zoë Chao bring many of those (those three definitely believe they’re in a comedy). There are other moments that are dark and horrible and feel as though they could lead towards a deep and meaningful examination of what family life is like for a (relatively wealthy) couple with two kids. Such things don’t happen, there are instead some easy fixes offered and life goes on.

“Downhill” is truly a disappointing trip.