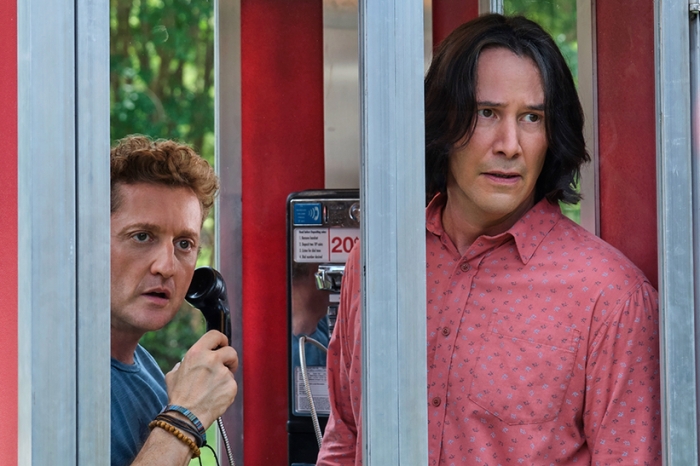 About 30 minutes after watching “Bill & Ted Face the Music,” I sat down to watch it again. After my first go through, I was unsure how I felt about the movie. Usually when this happens, I start writing my review and the act of putting thoughts to (virtual) paper clarifies things in my mind. I had no doubt I could do similar this time, but I didn’t want to; what I wanted was to love the movie and I thought a second viewing might get me there.

I don’t dislike the film, which sees Bill S. Preston, Esquire (Alex Winter) and Ted Theodore Logan (Keanu Reeves) find out that they have just 77 minutes to write the song that will bring all of humanity together and save the universe, but I don’t love it. Directed by Dean Parisot, this third entry into the series (the second having opened back in 1991), feels like a greatest hits album, but one that utilizes a new version of the same group doing covers of their own songs. Put another way, there are a bunch of good ideas tossed off over the length of the movie, but all too often one can shake their head and say, “Hey, this is just like that time in the other movie, but with Mozart instead of Beethoven.”

Yes, “Bill & Ted Face the Music” falls into that trap that a significant number of other belated sequels/reboots/rehashings have made – rather than coming up with something new and different, writers Chris Matheson and Ed Solomon, both of whom also wrote the other two films, have gone back to the same well. Elements are spun slightly, but not so much so that they won’t be instantly recognizable. So we see Bill & Ted’s daughters, respectively, Thea (Samara Weaving) and Billie (Brigette Lundy-Paine), go back in time to collect a bunch of famous people to help their dads, rather than the dads doing it.

This is in no way a knock on Weaving and Lundy-Paine, both of whom are great as Bill & Ted: The Next Generation. Thea and Billie offer up just the right amount of smarts (presumably garnered from their mothers, played this time out, by, in order, Jayma Mays and Erinn Hayes) and idiocy (clearly from their dads). However, the movie is torn as to whether it wants to do an immediate handoff or would rather holdout for another film. The result is that neither Thea and Billie, nor Bill and Ted, have storylines that are fully developed. Other elements, like Joanna (Mays) and Elizabeth (Hayes) travelling through the multiverse in order to find a place/time when they would be most happy with Bill and Ted wind up feeling like portions of a parallel film that only sometimes intersect the one we’re watching.

Although it may be somewhat disappointing to watch that last unfold, there is a logic by which it works. “Face the Music” has expanded on the time travel elements we’ve seen in the previous efforts, this time pushing that multiverse story (not fleshing it out, just pushing it). While the daughters are off collecting famous musicians to be in the band for this single song that has to be played, Bill and Ted travel to the future at multiple points in order to meet themselves after they’ve already created the song so that they can take the song from their future selves and play it in the present.

As far as I have been able to work out after two viewings and listening to the multiverse discussions offered up by Kid Cudi (played by himself) and others, while some of these future versions of Bill and Ted exist in the same universe as other future versions, none of them exist in the same universe as Bill and Ted prime. Because, after all, if Bill and Ted prime are playing the song that saves the universe today, couldn’t they just go to tomorrow to pick up the song rather than jumping to random points and finding versions of themselves who haven’t yet written the song?

Without George Carlin’s Rufus to guide them, Bill and Ted do get a visit from his daughter, Kelly (Kristen Schaal), and meet his widow (Holland Taylor), who is the Great Leader in the future. As another nod to earlier entries, there is a new robot, Dennis Caleb McCoy (Anthony Carrigan), who wants to kill Bill and Ted. William Sadler also gets high billing returning as Death, even though his presence amounts to little more than an extended cameo. In a very funny bit, Missy (Amy Stoch) is here with a new husband, and Ted’s dad, Chief Logan (Hal Landon Jr.) is back as well.

Both “Bill & Ted’s Excellent Adventure” and “Bill & Ted’s Bogus Journey” are movies which feel intricately plotted and terribly smart. Yes, the characters are morons and the situations improbable and both feel very loose overall, but that comes from having a tight focus in which to play. “Bill & Ted Face the Music” lacks that specificity. The first two movies are really smart about being dumb, the third isn’t dumb so much as it is hollow. It is nothing more than pastiche.

There are undeniably things to like about “Bill & Ted Face the Music,” first and foremost of which are the title characters. Reeves and Winter are still captivatingly wonderful in the roles, no matter what versions of the characters (present or future) we’re seeing. There is also a sense that this multiverse idea has been considered behind the scenes, the issue arises in its failing to be brought forward. Sadler’s Death is still brilliant and I would absolutely watch another movie about Thea and Billie. It just should be their movie instead of them doing the same things that their dads have already done. A new song, not a cover.