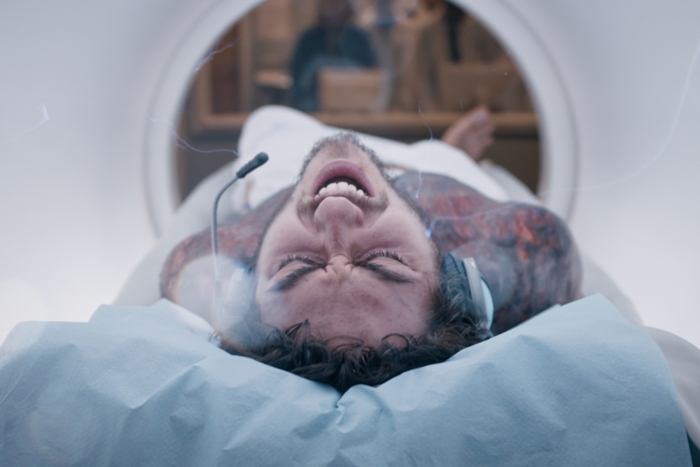 One of the fascinating—and insidious—things about conspiracy theories are the way they change and adapt in order to fit any incoming morsels of information which, logically, should force them to be dismissed. Someone out there will, undoubtedly, look at all the bits and pieces that make absolutely no sense in the new film “Mortal” and weave them together, continually adjusting as the movie plays out, into an explanation which is in no way believable but the creators of which will insist is correct nonetheless. With this movie, director André Øvredal, using a script from Øvredal, Norman Lesperance, and Geoff Bussetil deliver up a baffling set of story elements with little rhyme and less reason.

“Mortal” stars Nat Wolff as Eric, an itinerant American wanderer in Norway, a young man with a badly injured leg, wildly unkempt hair, and an ability to start fires which he can’t control. Eric has been moving about in the woods since starting a fire in which five people died three years earlier. He has learned so little of the language that he can’t even say “thank you” and doesn’t mind leaving whatever meager possessions he may have in his backpack behind when he does decide to venture into a town.

It quickly becomes clear that Eric has superpowers, but this is a world in which the concept of superpowers does not exist; once it’s recognized that he has powers, the first thought is “Jesus” not “Superman.” This is also a dead giveaway for the direction that the film will trend from that moment forward – Øvredal is doing a religious origin story, not a superhero one. We know from the start that it’s going to be one of the two as the movie is called “Mortal” and features a definition of the word at the outset, making it abundantly clear that Eric is something more than the meaning of the word.

This knowledge, while it is sigh-inducing, doesn’t make the movie more coherent. It doesn’t explain how Eric can be limping around but still manage to swim well enough to drag an unconscious woman to shore from the middle of a lake. It doesn’t explain why the Americans, in the form of Priyanka Bose’s Cora Hathaway, find it essential to bring him back to the States before they know he has powers, or exactly whose army it is she ends up controlling later in the movie. It doesn’t explain how Eric can manage to burn himself everywhere but for his face (this, one must assume, has to do with not wanting to ruin Wolff’s looks) and how his burns can blacken nearly his entire torso without actually affecting him in any way other than in the visual representation (remember, he has a hurt leg and has been limping, so there are consequences to his being physically harmed). It doesn’t explain how the seemingly small town sheriff, Henrik (Per Frisch), can operate so far outside his apparent jurisdiction or how people have any idea of where Eric is going with his newfound therapist/love interest, Christine (Iben Akerlie). It doesn’t explain why Eric goes from being able to start fires, purely by accident, to controlling lightning with his fire abilities entirely gone.

Those who have an exceptional enthusiasm for the movie will, upon reading this last paragraph, come up with a series of machinations by which these things (and the silliness I didn’t include) can all work. These explanations, if depicted on a wall, will wind up looking like Fox Mulder attempting to diagram the efforts of the Cancer Man. “I want to believe,” one can almost hear proponents whisper.

What Øvredal has delivered is the blandest of superhero origin movies with the spin that it’s actually the origin of a god. That is not enough to make the movie remotely interesting, and there’s nothing else here that can accomplish the task either. Wolff’s performance isn’t going to make up for that, nor is Akerlie’s, and due to the script, Bose is practically a non-presence. Even those who watch the movie hoping that “Immigrant Song” will feature on the soundtrack at some point are going to be disappointed.

There are absolutely ways of telling the tale of the birth of a god on Earth that would be fascinating and deal with the person—and the world—coming to grips with that reality. This is not such a movie. It simply moves forward telling its story without any examination of the story and its ramifications.

Sure, someone can go ahead, use a blank wall and create a string-and-pin diagram explaining “Mortal.” They can work in chemtrails or aliens or JFK Jr.’s imminent return or whatever they want. The knots that they’ll have to twist themselves into are going to hurt later.