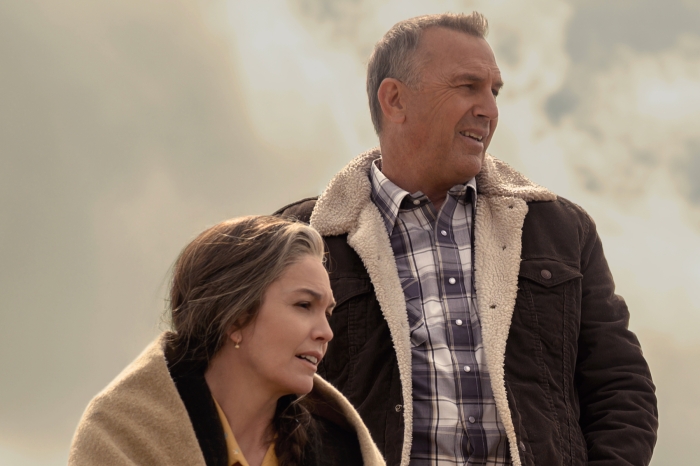 It only took about five minutes with “Let Him Go,” a new movie written and directed by Thomas Bezucha, based on the novel by Larry Watson, to realize how absolutely great Kevin Costner and Diane Lane are as an on screen duo. Embarrassingly, it took me a few minutes longer than that to realize that I’d already seen the two portray a husband and wife living together happily. This effort is completely different—and far superior—to that one, but it almost makes one want to go back and watch “Man of Steel” again just to see the pairing (good sense then gets the better of one).

Here, Lane and Costner are Margaret and George Blackledge, he a retired lawman, she a former horse trainer. At the start of the film, they live with their son, James (Ryan Bruce); his wife, Lorna (Kayli Carter); and the couple’s infant son. All of that changes, however, following a horsing accident and most of the movie features Margaret and George attempting to bring Lorna and their grandson (played as a three-year-old by Otto and Bram Hornung) back to Montana from North Dakota, where the two live with the Weboys, the family of Lorna’s new husband, Donnie (William Brittain).

This clan, the Weboys, are led by Blanche (Lesley Manville), who is closely followed by her brother, Bill (Jeffrey Donovan). The matriarchal Blanche has a ranch where she lives with her three sons (Bill has a place in town). A distinct inversion of the Blackledges, the Weboy family is evil to the core.

What we get with the movie is a look at how two different families, both run by strong women, can turn. Margaret, as a human being, is imperfect, but she is kind and generous and big hearted. George may not always agree with her, he may not always understand why Margaret pursues things in the way she does, but he would follow her anywhere and do anything for her. He knows that he need not agree with her to want to see her win the day (even if it means him losing) and is able, once he’s offered his opinion, to have Margaret accept it or not. Blanche prefers to have people terrified of her and willing to do her bidding out of fear. She controls everyone and everything she can with a firm grip and a short leash.

Bezucha’s film is a dark one, full of horrors inflicted by people on one another. It is tense and scary and desperately human. It is also full of love and wonder. It is reverent of the mountains and fields it offers, and of the huge open skies. The Blackledges, seemingly, are not only up against the horrors of the Weboys, but of the world. There are, unquestionably, moments where it seems as though it’s with them, but others where they are at its mercy.

“Let Him Go” takes its time to present its story, never rushing anything and delivering moments that may or may not be relevant to the larger story, but are just enjoyable to see. It is methodical, getting us invested in their life and love as it also tells the story of this terrible thing happening to them. There is a great sequence where they meet a Native American, Peter Dragswolf (Booboo Stewart), and end up just sitting by the fire with him, talking. Even with this fireside chat, just as with the rest of the film, we are given the sense that there is no good without bad, no dark without light.

That is what comes head-to-head when Blanche and Margaret square off. We don’t know how it’s going to end, but it’s clear that the tension will eventually boil over. Bezucha holds off the climactic moments between the Blackledges and Weboys as long as he possibly can, but when it occurs it is just as brutal and harsh as the rest of the movie.

What will stay with me long after the movie ends is the power Lane offers in her quietude. She commands the screen when she is there (as does Manville in a slightly more unstable manner befitting her character). As a retired lawman, George may have had the more exciting life on a day-to-day basis, but it is Margaret that one really wants to get to know.

“Let Him Go” doesn’t feel like a movie that is going to set the world on fire. It may not even be one of which people take a lot of notice. That is their loss, don’t let it be yours.