Movie Review: “Some Kind of Heaven” 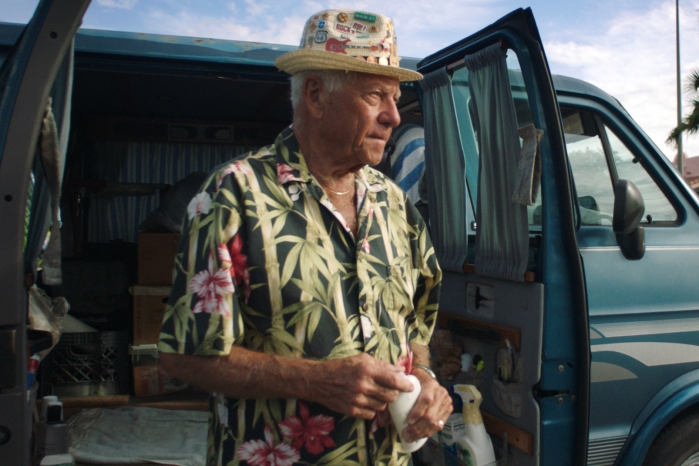 In the leadup to Joe Biden’s November victory in the Presidential Election, I saw more than one article about arguments at The Villages, a massive retirement community in Florida. Trump, infamously, < a href=”https://www.nytimes.com/2020/06/28/us/politics/trump-white-power-video-racism.html”>retweeted one racist moment their (naturally, he showed himself to be pro-racism).. Although I assumed that Lance Oppenheim’s documentary looking at individuals living at The Villages would, likely, not cover the political, I was still intrigued enough by what I had read to make sure “Some Kind of Heaven” was on my watch list. Out this week in theaters and on demand, I got both more and less than I’d bargained for.

Examining a handful of individuals who live at the Central Florida location (or, in one case, a van parked in a lot either at or nearby The Villages), what we get over the course of 83 minutes is an interesting examination of what their lives are like. We meet a recently widowed woman, who is not sure she wants to be there anymore now that her husband is gone, but who doesn’t have the cash to leave. We meet a couple, where the woman seems to be enjoying life, but her husband is slipping into some sort of drug-fueled altered state. We meet a man who has left California to find an elderly woman (any elderly woman as long as she meets his criteria) to take care of him and treat him in the way to which he would like to be accustomed.

That is not an insignificant amount for a documentary to take on, especially one that is so short, and where the lives never overlap. Yes, they all live near one another and are all experiencing some sort of loss or depression or great life upheaval, but each in their own way, with their own sadness.

If “Some Kind of Heaven” has a treatise, that’s it – The Villages is a place where people experience some sort of sadness or distress. This is where the weakness in the film lies – the construction of the film does not allow for the argument to be proven. What we actually have is a look at several individuals all experiencing sadness in their lives as they try to set themselves up for happiness in whatever years they may have remaining. However, that doesn’t mean that everyone there does (or even a high percentage).

The message gets confused by this very notion of The Villages, this massive place where more than 120,000 senior citizens live and which covers 32 square miles. The lives of four people undergoing intense stress cannot possibly act as stand-in for the lives of 120,000, but the way the documentary plays out seems to imply it is doing just that.

We are treated to an abbreviated history of the place and a short interview with the son of the founder and told about how there’s a fake narrative history surrounding the place (kind of like a story that one would hear about a ride at DisneyWorld). It is fascinating as far as it is explored, but comes up short on giving us true insight into the community.

Even so, we see people there getting ready for a golf cart parade, practicing cheerleading, being part of a rowing team, or belly dancing. Crucially, none of the individuals the movie is exploring at do those things (or at least we don’t spend any time with them doing those things) – the depictions of these groups exist within the documentary to situate the viewer at this location.. It is to make sure that we understand that living in this location is somehow tied up with what the interviewees are currently experiencing.

This last is true. From a certain point of view. What the subjects are undergoing is unquestionably influenced by a place that exists to sell an image of happiness and joy, a place which appears to have its own radio and television stations. It is in the understandable desire to extrapolate the subjects’ issues, which are affected by the location, into an issue experienced by all of those at the location where trouble arises. Additionally, this is a movie about people being in a new phase of their lives (one of the last phases, generally speaking), expecting it to be a smooth ride is silly. Even so, many of those lines could be drawn to any retirement community, anywhere. There is no sense offered that The Villages is unique in this regard even if the film might like to put forth that uniqueness.

Oppenheim’s camera is wonderful at picking up some of the amusing aspects of the location; some of the potential absurdity. What it is less good at is revealing the truth behind the stories being told. As an example, the married couple, we eventually learn, seems to have had serious relationship problems in the past, but we’re never given an explanation of what they were or how/if they were worked through. That is a crucial question because there can be no argument made about how their lives were changed by arriving at The Villages if we don’t know what those lives were like before.

There is, without question, a manufactured sense surrounding some of the happiness at The Villages. The place, apparently, refers to itself as “Disneyworld for retirees” and there are a myriad of interesting questions that could be asked based off of that. For instance, who owns the shopping centers and the various home developments; how is all this seemingly free music in various parks or squares provided; and what about the pools and the events and everything else, are those free?

One of the important questions, certainly, is: what does living in such a place do to a person, and that seems to be the one which “Some Kind of Heaven” most wants to explore. It doesn’t. No macro view of The Villages can be drawn from this documentary. The lives of those we meet seem at times heartbreaking and at other times joyous. These folks have ups and downs and difficulties all their own.

Perhaps then the answer to this last question is: nothing; it does nothing; you will remain who you were; you cannot run from your problems. Except, I don’t get the sense that Oppenheim intends to be putting forth that argument, the entire thing is too centered on folks undergoing trauma while living in this community for that to be the case.

“Some Kind of Heaven” is an at times interesting, always scattershot, documentary. Few stories deserve the Netflix/HBO/ESPN multipart docu-series that too many tales get, but maybe The Villages is actually worthy of such an approach.

What truly lies beneath this highly-polished exterior? I remain curious.