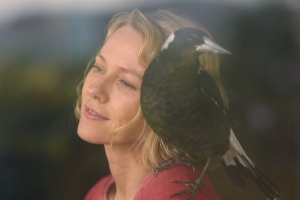 Any number of films exist seemingly with the goal of making the audience cry. Whether the tears come from upset or joy or one leading to the other or vice versa, all too often we get stories that seem to believe that the act of making the viewer cry means that they’ve done a good job. What if the true talent lay in telling an emotional story—a deep and meaningful tale—without forcing tears upon the audience?

Enter “Penguin Bloom.” Tears may come when you watch the Glendyn Ivin directed film, which is based on a true story, but they aren’t forced out of you. And that makes all the difference.

Naomi Watts stars here as Sam Bloom, a woman who, on a trip to Thailand with her husband, Cameron (Andrew Lincoln), and their three sons, falls off a balcony and finds herself paralyzed. The family, to that point, had been an outdoorsy one, living near the beach in Australia and spending a ton of time in the water. When we meet Sam, now in a wheelchair, those days seem well behind her and she’s unable to adjust to her new reality. As much as she may want to, she cannot seem to parent her boys — Noah (Griffin Murray-Johnston), Rueben (Felix Cameron), and Oli (Abe Clifford-Barr). She is having an exceptionally hard time finding her way back.

It isn’t that her life is bad now, the movie is by no means saying that, but it is radically different and Sam is having problems with the change. In fact, the whole family is struggling. It is our job in the audience to watch those struggles and they are tragic, but they are so very human.

Even the accident itself is understandable and human and truly upsetting. It is one of those situations where no one is to blame, but everyone puts the burden on themselves nonetheless. Sam fell because she leaned against a railing that was held in by rotten wood and it collapsed. Noah was the one who suggested they go up to that roof and so blames himself. Cam moved her when she was on the ground and worries (despite the doctors saying it isn’t the case), that his action caused the paralysis. Ivin delivers all of this information with simplicity, without it feeling forced, but making sure we have it nonetheless.

Similarly, when Noah finds an injured baby magpie, one who fell from a height and needs taking care of, Ivin doesn’t beat the audience over the head with the symbolism. We know that part of the reason that Noah takes in the bird is because he feels like what happened to the bird, which he names Penguin, is similar to what happened to his mother. We know that Sam, who initially hates Penguin, is going to come to love the creature and that through parenting Penguin, she will find a way back to being able to parent her children.

So, Ivin just tells the story, he lets it flow without much in the way of over-the-top dramatics. Yes, there is a fight or two and we can see so much upset on the faces of everyone in the family, including Sam’s mother, Jan (Jacki Weaver), but they are fights which spring from the best of places, from everyone wanting happiness for all concerned. Each member of the family puts on a brave face in hopes that by acting brave they eventually will be.

This approach to the story makes the Blooms just like any other family, or like any family would hope to be in similar circumstances. It is nearly impossible to see the movie unfold and to not wonder how your own life could turn, in an instant, into something very much like what you’re watching. There is no need to overdramatize the affair to get a reaction – it is a tragedy which is right around a corner for everyone, a corner we all hope never to reach.

The real tension in the movie, the strength of it all, isn’t in the raised voices, it is in the silent looks that play across Sam, Noah, and Cameron’s faces. It is in this surrogate stance Penguin takes on, with us fearing that if Penguin departs too soon, the Blooms will never recover.

Watts is brilliant in the role of Sam. There is such depth of emotion—happy and sad, fear and excitement—that she brings to the fore. When Cameron convinces her to try kayaking lessons, we know that it’s a good idea, but we feel Sam’s terror at the notion. As the instructor, Gaye (the always wonderful Rachel House), threatens to dump Sam out of the kayak and into the water, Watts’ tension radiates from the screen.

Lincoln and Murray-Johnston are no less good, nor is Weaver. It is Watts’ movie, but it is a familiar affair and wouldn’t work if their characters hopes and fears weren’t constantly on display.

I don’t know that there’s anything great or wonderful to be learned by watching “Penguin Bloom.” It is just the story of one family struggling through a crisis. But, it is an exceptionally human crisis, an accident that could happen to anyone and which would radically alter their lives. As the movie makes abundantly clear, Sam’s life isn’t over, her family’s life isn’t over, they just all need to find a new normal, and the addition of Penguin to the family allows them to reformulate their thoughts and feelings and move forward. Ivin’s camera captures it all, doesn’t oversell any of it, and serves up a heartfelt movie. If any of our lives should ever change to such a degree, if we are lucky, we will manage our new world with half the grace the Blooms offer.

If that causes tears, so be it.