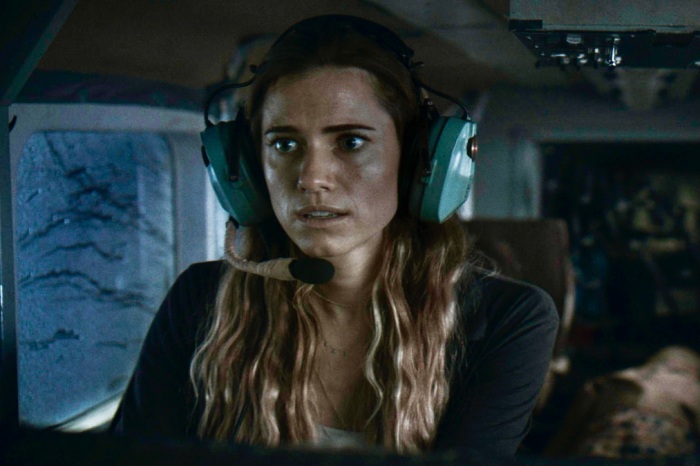 Hello and sort of welcome to a new “Lass is More.” Or maybe “welcome to a new sort of ‘Lass is More'” is a better way to start. I originally intended to talk about this movie in an episode of the podcast but for multiple reasons it’s going to be a written episode of the podcast instead. That is, it’s going to be more in the voice of the show than traditional review, which is why it’s filed here.

Out as of February 16th on Blu-ray is director Mikael Marcimain’s “Horizon Line.” Featuring Allison Williams, Alexander Dreymon, and Keith David, the movie is about a woman, Sara (Williams), who returns to the island nation of Mauritius, having previously spent a year there, in order to attend a wedding. She ends up running into her ex-boyfriend, Jackson (Dreymon), and naturally has to take a prop plane to the wedding with him. When the pilot (David) has a heart attack, Sarah and Jackson are left to figure out how to stay alive.

Listen, there is nothing terribly original about any of the various plot points in the story, only (maybe) how they’re all tied together in this tale. Plus, while we can lament as much as we want the fact that they give Keith David’s character a heart attack (he’s great), it isn’t going to bring him back. All we can really do is deal with what we’re given.

I’ll tell you this – what we’re given is a very silly and rather enjoyable movie. I mean, there are things which occur in this movie that are insane and stupid, but who doesn’t want to see someone climb outside a plane to open the hood while someone else is trying to keep the plane from crashing into the ocean? I definitely do and “Horizon Line” delivers.

You know what you can’t escape though when you watch the movie? It’s the question of whether or not individuals signed on to do the movie in order to get a vacation to Mauritius. For what it’s worth, doing so does not mean that they didn’t also give their best effort while working. Frankly, the island looks gorgeous and the movie very much made me want to toss everything and move there (just not fly in a lot of small propellor planes there). I could see, if I worked in the industry and had the opportunity, taking a job based upon it filming in a tropical paradise. I could see not working in the industry and becoming a bartender at one of the little shacks on the beach and never leaving.

Whatever the truth of why anyone signed on though, “Horizon Line” doesn’t feel phoned in (or whatever the equivalent is if rather than being on a phone, you’re half-drunk and completely sunburned while doing the job). It has just enough momentum to keep going for its 92 minute runtime and while I would have liked a different/better ending, I’ll take the one we get.

When you come right down to it, there’s a reason this genre works. The movie puts us in a position we all might find ourselves – with the wheels coming off through no fault of our own. Marcimain keeps us right there in the cockpit with Sarah and Jackson as they struggle to figure out how to survive. There’s one problem and then another and another and another, but they usually seem to grow organically and the movie doesn’t try to take on a weight it doesn’t have. It’s just a low stakes (except if you’re in the plane) disaster movie and is comfortable with that position. Sure, Sarah and Jackson make some utterly insane, completely reckless, truly terrible decisions along the way, but as much as we might like to think we’d do better, do we really know? Until the chips are down and our pilot has had a heart attack and there’s a massive storm, do we really know what we’d do?

(I mean, I know what I’d do, but I’m pretty self aware about my strengths and weaknesses)

And that’s where we’re going to leave it for this week. “Horizon Line” is out on Blu-ray now and is exactly what it seems to be, no more, no less. “Lass is More” will be back soon with another episode, but if you have any questions or comments about this one, send an email to us at lassismore.podcast@gmail.com. And remember – when you have a chance to live on an island forever, when you’re friends with the guy who makes the best rum, and you truly love the person you’re with, the only way life gets better is when you know that Lass is more.