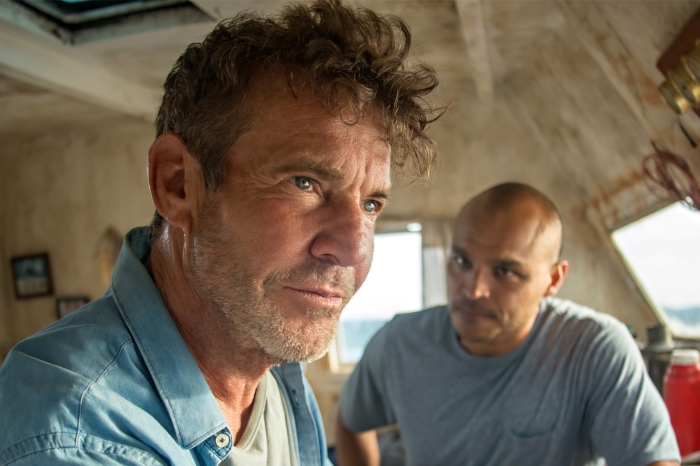 It would be easy, albeit cynical, to write a negative review of “Blue Miracle.” A family film, the movie is out on Netflix today and features Jimmy Gonzales as the operator of an orphanage for boys in Mexico as well as Dennis Quaid as a down-on-his-luck, once great now drunk, fisherman. It is the tale of “Papa” Omar (Gonzales) and Captain Wade (Quaid) being forced to team up to win a fishing tournament. Naturally, winning the tournament is the only way the orphanage, Casa Hogar, will have the money to stay open and it offers Wade one final chance to set his world right. If that’s not enough of a potentially uplifting thing, it’s also based on a true story.

Directed by Julio Quintana, written by Quintana and Chris Dowling, “Blue Miracle” is the exact sort of slightly saccharine movie that too often gets a bad rap. It is a movie that doesn’t go all that deep on any issue, merely making nods towards the hardships both the adults and children have gone through. There is no issue too large that it can’t either be solved by winning the tournament or just being swept under the rug in general. It includes all the necessary stereotypical orphan personalities such movies have made us come to know and expect.

Okay, yes, that’s all true, but, the all-too-cute youngest orphan, Tweety (Steve Gutierrez), and the too-cool-to-admit-he-needs-the-orphanage, Moco (Miguel Ángel García), work as types for a reason. The same can be said of Hollywood (Nathan Arenas), who dreams of better things and Wiki (Isaac Arellanes), who has facts at his command. Geco (Anthony Gonzalez), too, fits the mold as the kid who could have been Moco had he not gone to the orphanage sooner. Plus, Quaid spends much of the movie doing a kind of ultra-angry/defensive/crotchety Harrison Ford thing that is engaging and sad and, at times, funny.

That, however, would be a different movie. This one is not interested in the grungy or the grimy any more than it has to be in order to set the stage, and there is stage setting present. Early on we are treated to some scenes with the difficulties of the area in general and the orphanage in particular, just enough to get a sense of it, and then we move on. We understand what is at stake without the film wallowing in it.

The best kids’ movies are the ones that are great for adults as well, the ones that spark something within everyone watching. “Blue Miracle” coasts along, never truly rising to that level, but absolutely to keep 10-year-old enjoying what he was seeing and to keep me watching and wanting more of Quaid and Gonzales.

Yes, there are a couple of moments where the thing really shines – any time we get scenes with just Omar and Wade, there is an added zip to the affair. The scenes may be funny or serious, but there is something a little more tangibly effervescent about them, as though Gonzales and Quaid have upped their game just that much when they’re alone.

“Blue Miracle” is a movie that neither does anything terribly great nor anything horrifically awful. It is a movie content to tell it’s based on a true story tale about how Team Casa Hogar (Casa Hogar being the name of the orphanage) won the Bisbee Black & Blue Fishing Tournament and saved their home. It is sweet, maybe overly at times, but it offers an earnestness that works. We want to see these kids succeed. We want them to find the peace and joy and happiness that they deserve. The movie provides exactly what we’re looking for and that’s enough.