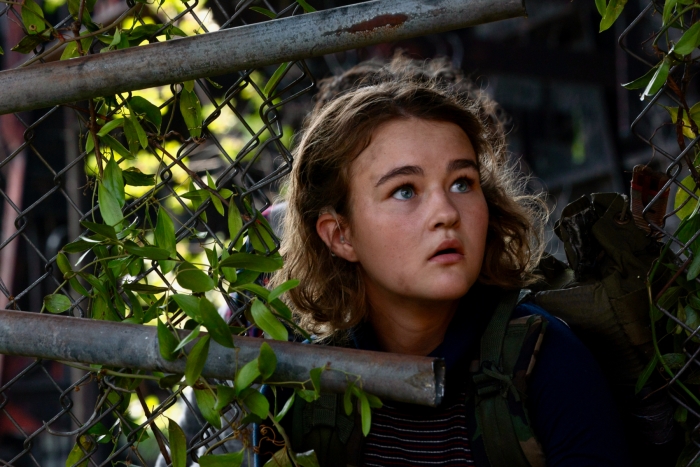 In the first “A Quiet Place,” our intrepid protagonist family, the Abbotts, trod on paths of sand that had been carefully laid out on top of roads and other trails. The sand was there to muffle the sound of their footfalls; to help them hide from the alien monsters which utilized any and all aural cues to find living prey. Early on in the sequel we watch as the family leave the sand trail behind and step out into the larger world. It is, in a way, a return to their older life—their pre-alien life—but it is now new and different and all together a more scary place than it was before.

Written and directed by John Krasinski, “A Quiet Place Part II” was initially scheduled to be released on March 20, 2020. That didn’t happen. Those of us who were able (and who listened to science and reason) retreated into a smaller world as much as possible, just as the family in “A Quiet Place.” Now, in May of 2021, with signs of returning to “normal” appearing at an increasing pace, many of us are stepping off our own trails of sand, venturing back out into the larger world. The lives may be closer to our old ones, but our perspectives are different, and it would be untrue to suggest that it wasn’t rather scary.

Krasinski couldn’t have known the resonance to our present reality his sequel would have when he first filmed it, but it exists. It isn’t even terribly hard to see. Truth be told, nothing in the movie is exceptionally hidden. In the first “A Quiet Place,” Krasinski offered a distinct lack of subtlety in several areas, most notably, foreshadowing, and that is back once more here in the sequel. However, this time Chekhov has more than one gun sitting there on the wall.

To some extent this is a disappointment. As a horror-thriller, knowing on more than one occasion what is going to take place before it does removes some of the thrill. Yet, when this lack of subtlety shines through in the imagery used in triumphant moments—and there are many of those as well—it is marvelous. There is more than one hero shot in the film, and they make the audience want to stand and cheer.

Are specifics vis-à-vis the plot in order at this point? Well, it would be silly to offer too many, but perhaps there are things that can be talked about that will not ruin any surprises the movie doesn’t reveal all too early on its own.

At the conclusion of the first film it was clear that any sequel would expand the world – Evelyn (Emily Blunt) and her kids, Regan (Millicent Simmonds) and Marcus (Noah Jupe), had discovered a weakness in the aliens and knew how to kill them. It is therefore no surprise that the sequel, after a prologue showing us the day the aliens arrive, finds the three, alongside Evelyn’s newborn baby, leaving their now relatively destroyed home. They quickly run into a friend from the before times, Emmett (Cillian Murphy), and… well, the truth is that the movie loses its way a little at this point.

Krasinski’s sequel is caught between wanting to do the first movie again at a new location and pushing forward the family’s quest to impart the knowledge of the monsters’ weakness to a larger group. So, it does both, separating the characters into two groups. Then, one of the subsets gets split (so as to better echo the first film, perhaps), and the story has to spin out in a number of directions and winds up sticking to the surface all too often.

The “you wait here while I go and get the stuff we need, don’t worry, nothing bad will happen” portion of the movie is undeniably tense, but because we know so much of what’s going to happen before it does, it horribly undercuts itself. This bit features Marcus, Evelyn, and the baby and, unfortunately is similar to (but not as good) as the first film.

As for Regan, even if it sticks to the surface, watching her story it is impossible not to cheer. Simmonds is the heart and soul of the franchise. Her work with Krasinski in the original movie, the establishing of that father-daughter relationship, is the biggest strength that film has and it’s great to watch Regan build on what she experienced last time. The sequel does less well tossing in Emmett as a substitute father figure, but Murphy is great in a role that too easily could have come off as entirely foolish.

Due to its not going deep enough, too often it feels like what happens to Regan is the result of random guesses (whether they are right or not) and luck (good or bad) rather than doing anything that resembles having a plan. There may be reasons we don’t understand for how and why everything works out for her in the way that it does, that is there may be underlying logic to it, but the fact that we can’t see and understand the connective tissue is a problem.

In the end, the biggest strength of “A Quiet Place Part II,” perhaps unsurprisingly, is the same as the strength of the first film – the family unit. Blunt, Jupe, and Simmonds are all fantastic in the movie (as is Murphy), with Simmonds the far and away leader. One wants to see her interact more with her mother and brother, to get to see the three thrive as a group, because the portions where they are working with one another are the best in the film.

The sound design, which functioned so brilliantly in the original, doesn’t feel as well deployed in this second outing. We still get those moments when we are put in Regan’s shoes and can’t hear the monsters (or anything else) around us and there are still moments when the audience holds its breath in hopes that they won’t be heard, but the tricks are less effective, perhaps because they’re being deployed a second time.

Make no mistake, “A Quiet Place Part II” is a good movie. What it is not, is a great movie. This is only really a problem because the first movie is great, and that makes any issues in the sequel stand out all the more.

Walking out of the sequel it is impossible to not wonder what film Krasinski would have made if he’d had the opportunity to actively reflect on the pandemic here. There are so many clear correlations between this movie and the COVID world that simply exist by accident. What would those have been were they on purpose? Despite any of movie’s faults, Krasinski still feels like a filmmaker with an active voice and point of view, and that has to make one curious about what he’d alter given the chance.

So, should you venture off of your sand-strewn paths to see “A Quiet Place Part II” in the theater? Presuming your fully vaccinated and are going to follow all safety precautions… yes, if you love the first one, you’ll likely enjoy much of what this has to offer. It is clear that there are many more stories that can be told about this family and this world, one will simply wish that this time out they were told slightly better.