Home › Uncategorized › “How to Train Your Dragon: The Hidden World” Draws out Emotions at NYCC

“How to Train Your Dragon: The Hidden World” Draws out Emotions at NYCC 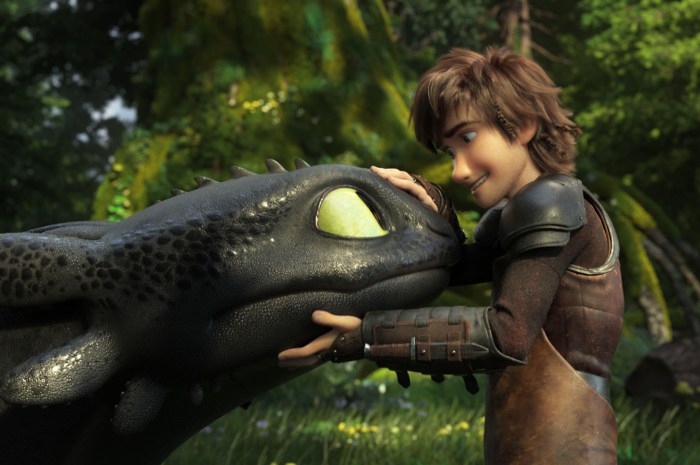 Whether or not the original “How to Train Your Dragon” looked incredible when the movie was first released to theaters in 2010, having watched it on Saturday night I can tell you that it is most certainly dated at this point.  At least, it is visually speaking.  There are moments that are still undoubtedly beautiful, but there are also several that just feel off, that feel every bit their age or more.

That seem feeling did not exist in the plethora of clips offered at the New York Comic-Con panel this past Sunday for the final movie in the trilogy, “How to Train Your Dragon: The Hidden World.”  Yes, the panelists—director Dean DeBlois, stars Jay Baruchel and F. Murray Abraham, and producer Brad Lewis—told us that this was it, the final movie.  I have to wonder whether that’s really the case, but at this point they seemed somewhat insistent about it.

True or not, emotional for the panelists and audience or not, the moments from the movie that were screened were beautiful. The most impressive sequence featured everyone’s favorite Night Fury, Toothless, courting a new dragon, a variant on the Night Fury.  Not only was the detail wonderful on the whole, but that led to additional feels in the audience.  The Toothless we saw was incredibly anthropomorphized.  Obviously, he has always been an anthropomorphic dragon, but the emotions that played across his face during the sequence were completely entrancing and far better than that first movie.

As for the tale this time – it pickups roughly a year after the events in the second movie and involves a new villain wants to kill Toothless, Grimmel (Abraham), and a search for the titular “Hidden World,” which, legend has it, is the birthplace of dragons, a place where only they exist, and where they can live happily. Per my usual anti-spoiler nature, I won’t say whether we learned if the world exists or not, but they are searching for it.

This panel felt particularly short, running 45 minutes from start to finish, and those present in the audience for it definitely wanted more.  As with the rest of us, they’ll all have to wait until February.