Home › review › Movie Review: “Portrait of a Lady on Fire”

Movie Review: “Portrait of a Lady on Fire” 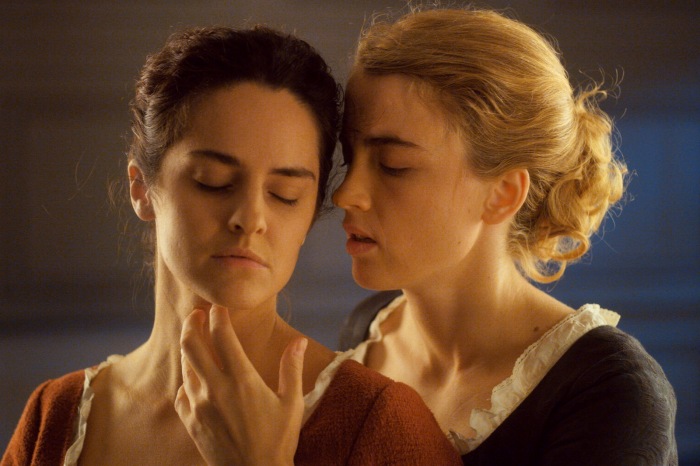 Some films are beautiful. There is no more clear, more simple, more honest way to describe them than beautiful. Writer-director Céline Sciamma’s “Portrait of a Lady on Fire” is one such film. This tale of love between a painter, Marianne (Noémie Merlant), and her subject, Héloïse (Adèle Haenel), in 18th Century France is handled with deftness and wonder and is lovely to watch.

The relationship starts on false pretenses as, per her mother’s instructions, Héloïse is not to know she’s being painted, but once the truth comes out and the mother, conveniently, goes away for a week, the romance blossoms. The two end up taking the maid, Sophie (Luàna Bajrami), under their wing and form their own sort of family.

Even if the story beats are terribly well worn, “Portrait of a Lady on Fire” treats each and every one as though they are something new and different and special, like the relationship itself. This is a movie of silent looks and stolen glances. Even when the love between Marianne and Héloïse is something they both acknowledge to the other, there is still a quiet glow to it all.

This glow is enhanced by the way in which the movie is shot – so much of it looks like it is taking place within one of Marianne’s paintings. Whether the scene is in the house or at the beach or anywhere else, every image put on screen feels like it could be a backdrop for a portrait and the women the perfect subjects. The painting could be one of an important person sitting for an official portrait or a jubilant celebration with townsfolk around a fire or just a slice of life depicting a quiet moment in an 18th century kitchen, but whatever the painting might show, it would be perfect.

The delicate nature of the story, the well-considered shots, the glow to it all, they are not accidents and yet still they don’t feel overly deliberate. That is, Sciamma has made a move where, while everything is considered, there is a light flow to it all so that the audience feels as though they are simply being wafted along the length of Marianne’s memory as she tells this tale from her past. The serious nature of the relationship is not diminished by this lightness, but rather enhanced – we know its import because it is a story that an older Marianne is relating and clearly has much significance to her.

Although the audience may well know exactly where the movie is headed and, more than that, exactly the steps that it will take to get there, “Portrait of a Lady on Fire” still succeeds via all of the above deftness. It works because it takes this relationship slowly, just as the women do, and because it shows us the beauty of every moment they have together, even if we all know that the mother will return, the portrait will be finished, and things will irrevocably change.

Subtitled, the movie would work just as well if those watching didn’t know what was being said. It is all there in Sciamma’s compositions and Merlant and Haenel’s looks. Fittingly for a movie with a painter, it is a film that places a primacy on visuals and being in love with its subject.

“Portrait of a Lady on Fire” is a touching, caring, sentimental look at forbidden love and momentarily grabbing hold of something that you know will all too soon slip from your fingers. There may be sadness around the tale, but there is something warm and comforting in the telling. It is an extremely touching and truly deft film.

‹ Movies that Mess with our Perception
Movie Review: “Sonic the Hedgehog” ›