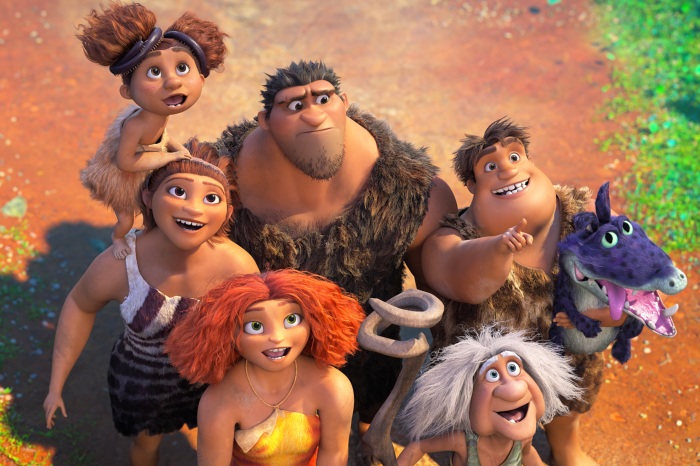 Some movies are balancing acts—or at least attempt to be—trying to manage two disparate things at the same time. Whether that’s because the movie is a mix of genres or attitudes or ideas or anything else, finding the perfect blend can be tricky. It isn’t just that there needs to be the exact right amount from the various columns, it’s that both columns have to be worthwhile in and of themselves. Sometimes that works and sometimes you have a movie like “The Croods: A New Age.”

A sequel to the 2013 film and directed by Joel Crawford with a screenplay Kevin Hageman & Dan Hageman and Paul Fisher & Bob Logan, this new “Croods” movie, rather like its predecessor, attempts to shine a spotlight on the universality of family and family problems (at least in the western world) while also being a relatively absurd comedy. The latter of these goals succeeds in spades, producing multiple guffaws. The former is smart in fits and spurts but lacks any sort of depth. On the whole, this results in a movie that, yes, will make you laugh but will also leave you feeling as though you very well may have just wasted the last 90 minutes.

The Crood caveman family themselves are all back for this go-round with Grug (Nicolas Cage), Eep (Emma Stone), Ugga (Catherine Keener), Gran (Cloris Leachman), Thunk (Clark Duke), and Sandy (Kailey Crawford, voiced by Randy Thom in the first film) still travelling and looking for that perfect tomorrow (or, “Tomorrow,” because they believe it to be a place). With them still is Guy (Ryan Reynolds), now a part of the gang and would-be boyfriend to Eep, much to Grug’s dismay.

Soon enough, the Croods encounter the Betterman family—Phil (Peter Dinklage), Hope (Leslie Mann), and Dawn (Kelly Marie Tran)—and Grug sees an opportunity to ditch Guy and keep his core family together. Hope and Phil actually know Guy back from before his parents died in a tar pit and would love for him to wind up with Dawn.

None of that is interesting whatsoever. It isn’t just dull, it’s that it also goes nowhere; there is no depth to that story. The one admirable aspect of this portion of the tale is that Dawn and Eep are not pitted against each other. The two women instead become fast friends, bonding over their overprotective parents. They are oblivious to the machinations surrounding them.

Watching, one might think that the film recognizes that the parental story isn’t going to go anywhere, because at some point it becomes subsumed by another one. Here, Phil has been attempting to keep an unknown terror away by feeding it bananas every night. There is nothing great to this tale either, but it does lead to more moments of the aforementioned absurdity and that is where the movie shines.

Yes, with the most scant of two different plots not working very well, “A New Age” succeeds when it does things that are outlandish and bizarre and which I will not ruin here. Suffice to say that when the movie decides that it doesn’t have to make sense and can just do anything it wants rather than telling a cohesive narrative it is excellent. Really excellent (if such foolishness is your thing).

These moments of absurdity exist throughout the sequel—there were some in the first film as well—and they sing. Just as with that movie, there is a freedom in these moments. It is here where the sequel doesn’t feel like it needs to offer up a Flintstones-like tale of all the modern-stuff made with prehistoric elements that comprise the Betterman abode. It is here where the movie is able to move beyond the simplistic “you see, the Croods are crude and the Bettermans are better men and women (at least in their use of the environment)” with which it otherwise sticks.

The first “Croods” isn’t exactly a deep film, but it does a fine job telling the story of a teenager trying to find her place in the world and the friction caused by the way a family needs to adjust as people grow and change. When it isn’t being absurd, “A New Age” offers a slight nod to that idea in Dawn’s issues with her parents, but it’s only the briefest of ones before the movie decides that it would rather do sitcom shenanigans (or recycle other ideas from the first film). But my god, when Crawford and company decide to just be completely insane, it not only works, it’s brilliantly funny.

There are a couple of needle-drops that work really well in the movie, adding to the gleeful chaos of it all. The visuals, too, are effective particularly in the moments of pure foolishness. As with all things here, when “A New Age” decides to go for it, it does very well indeed.

Just as “The Croods: A New Age” suggests a marriage between different people, the movie itself is a marriage of two vastly different ideas. In terms of Eep and Guy, the two of them are strong individually, and one has no doubt that they will become something greater together than separate. As for the movie itself, the absurd moments find themselves propping up the mundane ones and combination is uneven at best. It is not a marriage of equals and on the whole not terribly successful.